Development for the E34's successor began in early 1989, internally known as "Entwicklung 39" and ended in 1995. The final design was approved in 1993, with the German design patent being filed on April 20, 1994. The first pilot production models were built in February 1995, with full-scale production starting later in the year. The complete vehicle redesign draws heavily from the E38 7 Series in body construction and electronic technology. The mid-level BMW saloon showed evolutionary styling changes rather than a dramatic redesign. Initially offered only as a saloon, the wheelbase grew by 68 millimetres (2.7 in) and overall length by 55 millimetres (2.2 in) over the previous 5-series, the E34. In the US, the new 5 Series came in two forms: the 528i and 540i.

A ZF S5-31 five-speed close-ratio manual transmission was standard on the 528i, with an optional A4S 310 R four-speed automatic or (in Rest of World models) a A5S310Z five-speed Steptronic transmission (based on the ZF 5HP18). The 540i, in contrast, could have either a Getrag six-speed manual or a new five-speed A5S 560Z automatic transmission with adaptive transmission control (with or without Steptronic option). Standard equipment on both models included dual front and side airbags, anti-lock brakes, traction control, power steering, and air conditioning.

The E39 all-steel body acts as a safety cage for occupant protection. The structural rigidity of the monocoque was increased using computer-aided engineering. This allows key points to be reinforced, to increase rigidity, without significantly adding to the weight. The overall increase is 10 kilograms (20 lb), which is offset by the aluminium suspension. Laser welding techniques ensure rigid bonding throughout.Another area of focus in the design of the body was in structural dynamics. The body was designed so that the frequencies for torsional twisting and bending are in separate ranges and above natural frequency. These frequencies are out of the range of engine and driveline vibrations; thus they will not amplify them.

The aerodynamically designed body and features of the E39 gave the 528i and 540i, 0.28 and 0.31 drag coefficients respectively. Torsional rigidity was also increased over the E34, by 40 percent. The chassis was so stiff that the rigidity was unchanged for the E60 model.This added stiffness allows the suspension to work with more accuracy. It also allows total engineering of ride quality through the suspension; rather than in combination with body flex. 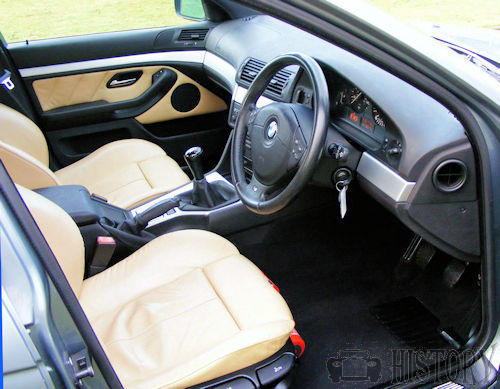 With the E39, two steering types and double pivot, MacPherson strut suspensions systems are used. For the 520i–530i models, BMW, for the first time in a 5 series, utilised rack and pinion steering.This not only offers weight reductions over the recirculating ball type used on the V8s, but also provides quicker steering response through its variable ratio, as well as a more precise feel. This system steers from the front of the axle.

Six-cylinder models also receive an aluminium front subframe. The struts use aluminium "Tension Link" that comes from a forward position back to the front of the wheel and an aluminium horizontal link to locate them. Aluminium is used for the steering knuckles, outer strut tube, and the spring pads; saving 21 kilograms (46 lb).

With the 540i, BMW retained the front steering and suspension from the previous E34 540i with the design based on the E38 7 Series The physical size, dimensions, and weight of the V8 engine required the use of the older recirculating ball steering. This system steers from the back side of the axle. The front subframe is steel. To compensate for the heavier front end, BMW used extra aluminium in components including the steering box, steering knuckles, outer strut tube, and the spring pads. The struts are located by an aluminium "Thrust Link" that comes from the rear to meet the back of the wheel and an aluminium horizontal link.

The E39 employs similar design to the E38 7 Series for the rear suspension, regardless of the model specified. This "four-link integral rear suspension" or "Z-link" axle was first introduced on the BMW Z1. With this, Chapman struts are utilised. Through precise toe angle changes, stable yet responsive handling without unwanted toe change effects under load is achieved. 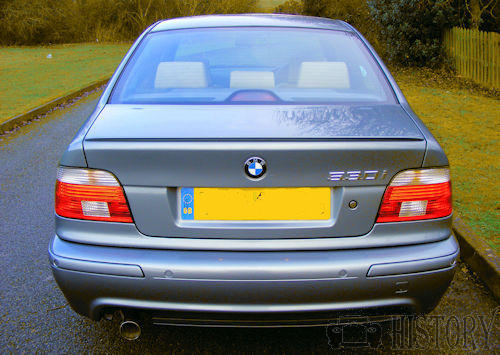