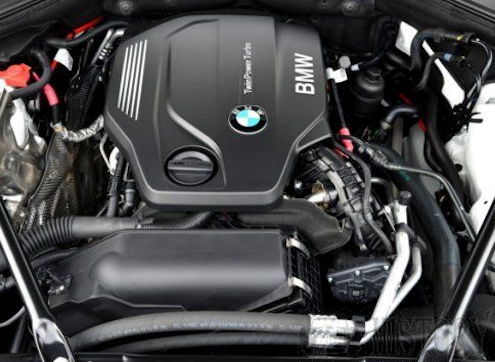 The B47 is a turbocharged four-cylinder - diesel engine of the automobile manufacturer BMW . Completely redeveloped, he debuted in 2014 in the BMW X3 and replaced the predecessor N47 . Together with the B37 ( row three-cylinder diesel engine is) and the B57 ( six-cylinder diesel engine is) and the three Otto engines B38 ( three-cylinder ), B48 ( four-cylinder ) and B58 ( six-cylinder), the B47 belongs to the modular construction engines introduced by BMW in 2013/2014. The modular engines are used in BMW models as well as in MINI models.

Like its predecessor N47 , the B47 has four cylinders in series, a common-rail injection , 1,995 cc displacement and also uses balance shafts . The volume of 500 cc per cylinder resulted from thermodynamic and efficiency considerations  . In most variants antifriction bearing turbocharger is adjustable turbine guide vanes installed, the strongest expansion stages (165 kW and 170 kW) are equipped with two turbochargers, both parallel to the principle of turbocharging and connected in series with multi-stage charge can work.
In addition, in the development of the acoustic behavior of the engine was important. Here is u. a. the combustion is nail-optimized by the injection system, and various sound sources are encapsulated  .

Compared to the N47 , the B47 offers more power and higher torque over the entire speed range in all expansion stages . This provides better acceleration and elasticity values. A new combustion chamber pressure sensor also makes it possible to operate the engine closer to its optimum point on the combustion side . The B47 complies with the EU6 emissions standard and, depending on the variant and gearbox , lowers the standard fuel consumption by 0.1 to 0.4 liters compared to the N47 .

By equal parts , which are also used in other new engines, such as the three-cylinder diesel B37 , as well as the petrol engines of the modular system, there is a greater flexibility in production fluctuations in demand and cost reduction.

In November 2017 it was announced that all variants received the bit turbocharger: Technical revision B47TÜ1. Further, all engines received an Adblue injection. Higher injection pressures - at the 218d 2500 bar and the 220d even 2700 bar (Tourer), - as well as detailed improvements in forms and surfaces of cylinder liners ( shaping ofthe cylinder liners) and piston, belt drive and oil supply contribute to a lower fuel consumption. For the strong variants are used solenoid injectors. 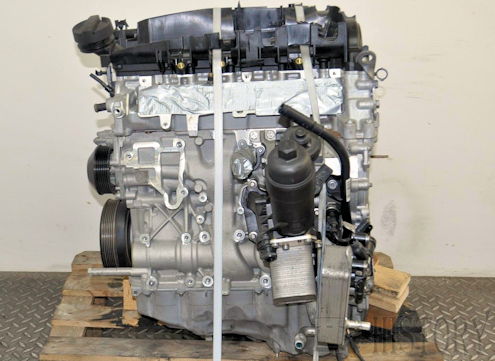