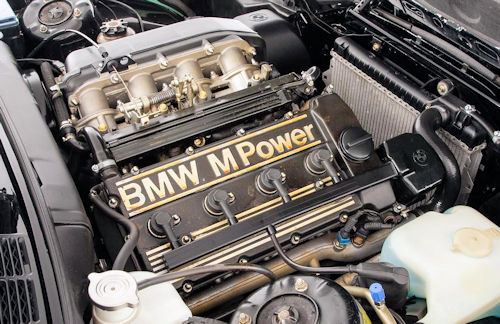 The BMW S14 is a straight-4 DOHC piston engine which was used in the E30 M3. It is based on the M10 block and the M88 head with two cylinders removed. The successor to the S14 is the S50 six-cylinder engine (since it was used in the following M3).

The BMW S14 is an engine series of the German motor vehicle manufacturer BMW, which was developed for the first intended for motor sports as Homologationsmodell first BMW M3 .

This is a DOHC - rows - four-cylinder - petrol engine in four-valve technology with manifold injection and individual throttle butterflies . He came in the BMW M3 (E30) and in particular Portugal and Italy model BMW 320is the vehicle series E30 used.

Although the BMW S14 followed the BMW S50 in the BMW M3 , but the S50 can not be considered the successor to the S14 due to the fundamentally different dimensions (cylinder spacing, bore, stroke, outer dimensions) and the different engine concept (six instead of four-cylinder).

This engine built on the already proven in motorsport M10 cylinder block and had like this a cylinder distance of 100 mm. On this cylinder block, a cylinder head of the M88 / 3 shortened by two combustion chambers was tentatively set. The later series cylinder heads were based on the design, especially from the tests to the previous racing engines of the type M49 and M88 were present many results and experience. The two overhead camshafts are driven by a duplex chain . The mixture is supplied separately for each cylinder via its own intake manifold and throttle .

The four-cylinder engine has a five-fold mounted crankshaft, which is insensitive to torsional and bending vibrations at the usual in motor sports very high speeds due to their short length. The inlet valve bore of the adopted cylinder head increases to 37.5 mm and inclines 18 °. The exhaust valves with a diameter of 32 mm and a 20 ° incline face each other in an almost perfect V to ensure a quick charge change. Further performance improvements were achieved by relieving the pistons with milled valve pockets, as well as an oil cooler. The oil sump is equipped with a so-called oil planer to calm the moving oil quantities. This oil planer sits between the crankshaft area and the oil sump.

The engine is controlled by a Digital Engine Electronics (DME), which automatically adjusts the cold start behavior without a cold start valve and, depending on the altitude, adapts the ignition angle and / or mixture formation.Two separate throttle bodies are used, each incorporating two throttle butterfly plates.