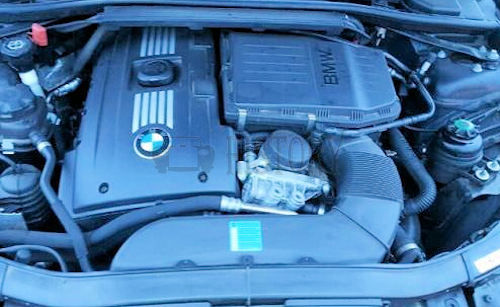 The N54 is a turbocharged gasoline engine with six cylinders from BMW , which has been produced since 2006. The in- line engine with bi-turbo was introduced in autumn 2006 as a high-performance version for the BMW 3 Series , especially for the BMW 3 Series Coupé . Shortly thereafter, the use in other BMW models. This is the first turbocharged petrol engine from BMW since the 745i in 1980.  The engine won from 2007 to 2012 six times in a row the International Engine of the Year Award.

BMW indicates the performance of the N54B30 with 225 kW (306 hp), in the 2008 BMW 7 Series ( BMW F01 ), the power rating was increased to 240 kW. The engine uses two small turbochargers to  keep the turbo lag as small as possible. For this reason, the boost pressure is just 0.4  bar with the aim of giving the driver the feeling of driving a car with a naturally aspirated engine .  The motor debut on the Geneva Motor .  Like the BMW N53 it does not use Valvetronicsaid valve controlling the BMW N52, The engine has direct fuel injection and fully variable valve timing ( VANOS )

Although the dimensions of bore and stroke are identical to the older BMW M54B30 , and the engine block like this one is made of aluminum  , the majority of the design features are more similar to the N52, such as the open deck and bedplate designs. The N54B30 is 187 kg  about 25 kg heavier than the N52B30. In addition, the identical with the M54B30 engine capacity of 2979 cc instead of 2996 cc of the N52B30 explains. The performance of the N54B30 is similar to that of the N62B40 , which is a V8and 70 kg heavier. In low speed torque, the N54 is superior to the V8. For this reason, it was decided to produce a bi-turbo in-line six-cylinder instead of a heavier V8 engine. Decisive for this was the use in the 3 Series BMW; here the 335i achieves approximately a 50:50 weight distribution. The crankshaft is forged.

Unlike the (naturally aspirated) N52, N53 and (turbocharged) N55, the N54 does not use variable valve lift (called valvetronic by BMW) or a magnesium alloy block. This is because the newer N52 aluminum-magnesium engine block was not deemed as suitable for turbo-charging with the above-mentioned engineering goals. Instead, the N54 engine is based on the older BMW M54 engine. It therefore features an aluminium construction and variable valve timing to both camshafts (called dual VANOS by BMW). Differences between the M54 and N54 include twin turbochargers, an intercooler, direct injection, a closed-deck single-piece block and an electric water pump. As per the M54B30, the N54 has a capacity of 2,979 cc (182 cu in). With a weight of 195 kg (430 lb), the N54 is 34 kg (75 lb) heavier than the N52.

The engine uses two small low-pressure turbochargers to minimise turbo lag. The boost pressure is 8.8 psi, because BMW's goal was to offer the same driving feel as with naturally aspirated engines.BMW's term for turbocharging is "TwinPower Turbo", which has also been applied to the N55, which uses a single twin-scroll turbocharger.

In the E60 5 Series, the 4.8 litre V8 model was judged have more nose-heavy handling than the N54-powered 535i, and the acceleration was deemed to be only marginally faster. In the F01 7 Series range, the handling of the N54-powered 740i was preferred over the 750i (powered by a 4.4 litre twin-turbo V8 model), although the acceleration of the 750i was faster. Another reviewer found the N54-powered 7 Series model to have more linear power delivery than the 4.4 litre twin-turbo V8 model. Fuel economy of the 740i is comparable to the ActiveHybrid 7, however the ActiveHybrid 7 accelerates to 60 mph (97 km/h) 1.1 seconds quicker than the 740i. 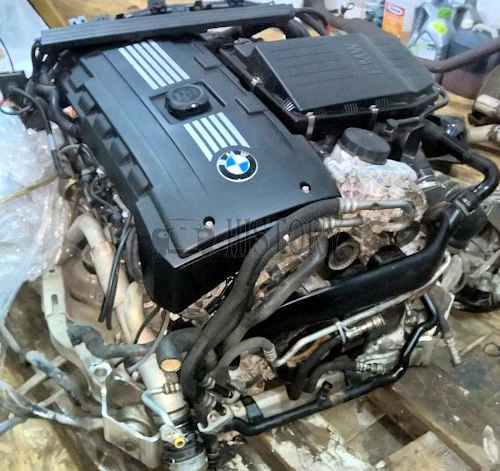 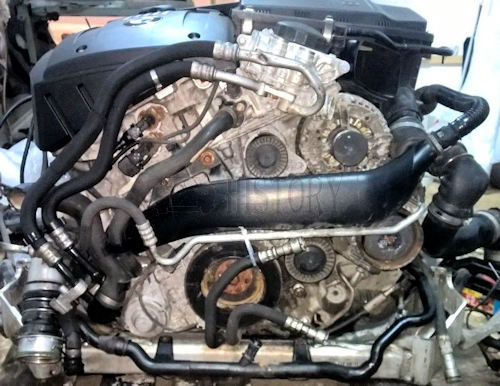 In at least the US market, the N54 engine has been characterized by a very large number of High Pressure Fuel Pump (HPFP) failures, leading to BMW North America vehicle Lemon Law "buy backs" and reduced customer goodwill. BMW's failure to solve the HPFP problem has led to serious safety concerns over dangerous sudden losses of power at highway speeds. Reports of drivers being stranded are not uncommon and some have accused BMW of actively concealing the problem rather than addressing it. On 26 October 2010, BMW announced a recall of vehicles with the pump in question from manufacturing years 2007–2010.

In April 2009, a class action suit was filed against BMW in connection with HPFP failures. BMW settled the suit in June 2010. On 26 October 2010, following an ABC News story about HPFP failures,BMW announced a recall of vehicles with the pump in question from manufacturing years 2007-2010.

The N54 turbochargers have been known in at least the U.S. and Canada to suffer from premature wastegate bushing wear which results in an audible wastegate rattle noise. If the wear is severe enough the wastegate will not seat properly resulting in a loss of boost pressure and trigger engine fault 30FF which temporarily reduces power output. BMW North America (which does not manage the Canadian market despite its name) recognized the design flaw and extended the warranty period for US vehicles to 8 years/ 82,000 mi for wastegate related issues only. BMW Canada (which does manage the Canadian Market) does not offer any relief for turbocharger wastegate rattle issues in Canada beyond original warranty.

It has been widely reported that the N54 valve intakes experience build-up of oil and gas deposits (carbonizing). The buildup of a black film on the intakes can, over time, cause reduced power and has been linked to misfiring,. Some N54 owners experiencing significant build-up have reported a perceived improvement in performance once the build-up is removed (although dyno charts of an unclean N54 vs a cleaned N54 have not been widely publicized).

The recommended method and frequency of cleaning varies, but most forums, which include feedback from experts and mechanics, recommend 'walnut media blasting' (for example,). This is a process by which pressurized air (usually 6-8 bar) is combined with fine walnut shell granules and blasted into the intake tracts. These granules hit the build-up at high speed and remove it entirely. Walnut material is soft enough not to damage the metal of the intake tract and the valves.