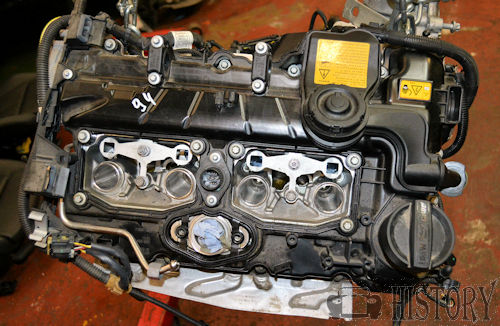 The BMW N20 is a turbocharged straight-4 DOHC petrol engine which replaced the N52/N53 and has been in production since 2011-present. Although the N20 is a straight-4, it is considered a replacement for the straight-6 N52/N53 because it powers equivalent models, producing similar horsepower to its naturally aspirated straight-6 predecessors with greater low-rpm torque and better efficiency.

he N20 engine was developed as part of the EfficientDynamics concept, which aims to reduce fuel consumption and pollutant emissions while improving performance. The design is based on the six-cylinder N55 , which has penetrated into power ranges, which were previously reserved for engines with eight cylinders.  The N20 has two cylinders less than the N52 and the N53 , which he intended to supplement or replace. As a result, it has lower friction losses, is lighter and therefore consumes less fuel.

Engine block and cylinder head are made of aluminum . The engine has two overhead camshafts and the camshaft adjustment double VANOS . The lift of the inlet valves is additionally adjustable via the Valvetronic system, which achieves higher actuating speeds with a new servomotor with built-in sensor. The throttle is thereby unnecessary, whereby the throttle losses are reduced and the response is improved. The mixture prepares the gasoline direct injection called High Precision Injection (HPI)on. By means of solenoid valve injectors arranged centrally between the valves, the fuel is transported in a jet to the spark plug with a maximum injection pressure of 200 bar , which allows more accurate metering of the fuel. Due to the cooling effect of directly injected gasoline, a higher compression can be realized. Whether the HPI as in the engines N43 or N53 requires low-sulfur gasoline is not known.

The turbocharger has two separate intake spirals ( twin-scroll , called BMW TwinPower). The cylinders are grouped in groups with a favorable ignition interval (240 ° for three-cylinder groups, 360 ° for two-cylinder groups). Therefore, at the end of the fourth stroke, when intake and exhaust valves are open, a low pressure in the exhaust passage is present, whereby flushing of the combustion chamber with air can be achieved. This increases the mass flow and the compressor operates farther away from the surge line with better efficiency and higher speed. In addition, the residual gas content in the combustion chamber decreases, which reduces the tendency to knock. Twinscrollers are usually combined with camshaft stators and direct injection in gasoline engines to utilize the purging effect without unburned fuel entering the exhaust.

EfficientDynamics package measures , including brake energy recuperation , electric power steering and automatic start-stop, contribute to further fuel savings . New is the demand-based control of the oil pump and an electrically driven coolant pump, which is controlled as needed, regardless of the engine speed.