The BMW M70 is a 220 kW 12-cylinder V engine with a crankcase made of an aluminum - silicon alloy. The silicon should minimize wear. The bore is 84 mm, the piston stroke 75 mm, so that a total stroke of 4988 cm 3 results. Bore and stroke are the same as those of the M20B25 ; M20 and M70 have the same pistons. The pistons are made of an aluminum alloy and coated with iron, the piston recesses are aligned with the spark plug . The seven-bearing crankshaft , forged from C45E tempered steel, is like the BMW M21 stored in ternary bearings. There are always two connecting rods articulated on the same crank pin. The crankshaft has twelve counterweights.

Each cylinder has two valves, the valve plate of the inlet valve (diameter of 42 mm) is 44% larger than that of the outlet valve (diameter of 35 mm). The valves are actuated by rocker arms from an overhead seven-bearing camshaft , which is driven by a chain. For each cylinder bank, the engine has a camshaft ( SOHC ); because of the Pleuelanlenkung and cylinder position, the camshafts of the left and right cylinder bank are different lengths. Two digital engine electronics of the type Bosch Motronic 1.2individually regulate the intake manifold injection for each cylinder bank. The motronic systems are monitored by the electronic engine power control EML. The two throttle valves of the engine are synchronized with the EML control unit, which opens or closes the throttle valves according to the accelerator pedal position. In addition, the EML control unit also monitors the electronic driving aids. The ancillaries of the M70 are powered by a belt.

In principle, the M70 consists of two M20B25 six-cylinder engines, which share little more than the crankshaft and the return of the fuel in the tank, almost all other components are two-fold: fuel pump with flow, fuel pressure control, injection system with control units and exhaust system with one each separate strand, one catalyst each and independent lambda control. The redundancy goes so far that even one bank of the engine can run independently of the other in the emergency.

The M70 essentially acts as two 2.5L straight-6 engines joined at a 60 degree angle, and shares many design elements from BMW's earlier SOHC engine designs, most notably the M20. The M70 was machined on the same tools as the M40 straight-4 engine, and shares some common parts. Additionally, it carries over the same 84mm bore and bore spacing, 75mm crankshaft stroke and six cylinder bank(s) of the 2.5 litre M20. The M70 has two Motronic 1.7 ECUs (one for each cylinder bank).

This said, the M70 engine does differ from earlier designs in a number of key ways, including:

Some examples of this engine are fitted with two alternators, such as in the E32 750iL Highline. One alternator is a full sized unit to service the car as on "regular" V12 models (regular to be taken in context of course), while the secondary smaller unit is used to charge an auxiliary battery and power all options in the rear passenger compartment, such as telephones and fax machines, as well as the wine cooler, independent climate control and power sun shields. 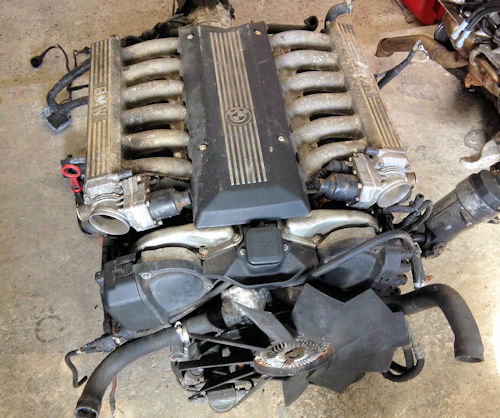 The S70/2, while sharing the same 12 cylinder layout and design principle as the S70B56, is essentially two European market S50s joined together, and thus features 4 valves per cylinder and variable valve timing (called dual-VANOS by BMW) a dry sump oiling system and individual throttle bodies. Unlike the M70, it does not have hydraulic valve lifters, and as such requires routine valve adjustment.