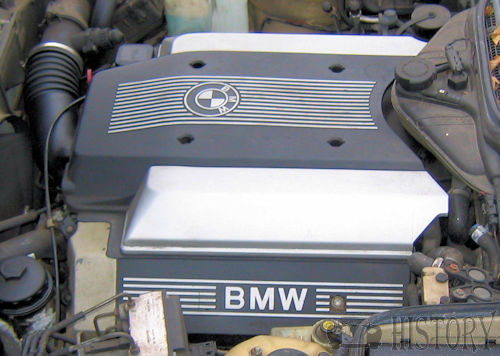 The BMW M60 was also used in other cars, of which especially the De Tomaso Guarà is worth a mention.

The very compact and rigidly designed crankcase with a cylinder angle of 90 ° using CAD software consists of an aluminum alloy (AlSi9Cu3), as well as the oil sump and the cylinder head; Thus, the complete engine with attachments weighs only 209.4 kg (M60B30 with manual transmission, M60B40: 213.2 kg), the bare block even only 25 kg and each of the two (different length) cylinder heads 30 kg. The cylinder head covers consist of a magnesium alloy.

The engine has two overhead mass- compensated camshafts per cylinder bank ( eccentrically offset engine vibration compensation sections ), which are driven by the crankshaft via dual- pulley chains (duplex chain), with the drive running on the two intake camshafts. From there, the exhaust camshaft is controlled via a further double-roller chain. The identical camshafts for both M60 variants are designed as solid shafts in shell casting. They are 5-fold, with the camshaft bearings divided. Due to the different length cylinder heads of each cylinder bank and the camshafts are different lengths. The valve angles are (as in the BMW M50) 20 ° 15 'on the inlet side and 19 ° 15' on the outlet side.

Between the two cylinder banks is the intake manifold of reusable plastic ( nylon ), whose smooth plastic surfaces are characterized by their low flow resistance. Four valves per cylinder provide gas exchange, which are moved by bucket tappets with automatic hydraulic backlash compensation. The spark plugs sit centrally between the four valves per cylinder, and are driven by a static ignition distribution , in which each spark plug has its own ignition coil. The engine control was carried out by the fully digital Bosch Motronic 3.3, which used the mixture with the aid of the lambda probe(Catalyst versions) and double knock control controlled. For the export market (mainly Eastern Europe and Asia) versions without catalyst were also sold.

For the first time in mass production, BMW became the world's first automobile manufacturer to implement a nickel dispersion coating for the cylinder liners of the M60 eight- cylinder engine. Since the aluminum alloy AlSi9Cu3 used for the crankcase does not have the required wear resistance, the surface of the cylinder bore had to be protected.

In the BMW M70 twelve-cylinder engine , the cylinder crankcase was manufactured from a hypereutectic aluminum alloy (with 17% silicon content). After casting, the alloy was deliberately cooled, so that during the solidification process silicon precipitates formed on the cylinder liners. The silicon crystals were exposed by machining or etching the cylinder liners and provided due to their good tribological properties for wear protection. The disadvantage, however, was that the acting as a friction partner piston iron-coated and the piston rings had to be chromium-plated.

BMW has been providing the cylinder liners of motorcycle engines with a nickel dispersion layer since 1984. When coating a motorcycle crankcase, however, the entire crankcase is submerged. For the BMW M60 was a further development to the so-called "flood process". After the fine turning of the cylinder bore, a nickel dispersion layer was galvanically deposited on the cylinder wall. In the nickel layer was thereby very finely distributed silicon carbide(SiC) embedded in the nickel layer. Nickel thus serves as a binder or carrier layer, SiC takes over the wear protection. The patented process makes it possible to selectively coat only the cylinder bores themselves in the desired shape and material thickness. Each hole receives a separate circuit and is flooded separately. After application of the nickel dispersion layer , this was removed in a final honing process by about half to 0.04 mm.

Advantageous is the BMW patented method  u. a. for the following reasons:

The BMW M60, given regular maintenance and low-speed warming, is considered a rugged and durable engine. Like virtually every engine, the M60 has some weaknesses.

The screws of the oil pump can loosen during operation and fall into the underlying oil pan. They should therefore be checked immediately after the (used) purchase for a tight fit and secured as a precaution by means of screw locking permanently. This eliminates a regular check.

The M60 has factory-built ceramic catalysts, where more often the newer (round) variants can collapse due to aging and then clog the exhaust; However, in the aftermarket also metal catalysts are available.

At the beginning of production, the BMW M60 experienced engine damage mainly in the US and the UK, which was attributed to a failure of the nickel dispersion-coated cylinder surfaces of the crankcase. The disadvantage with nickel-plated surfaces is the high sensitivity of the nickel (and its alloys) to sulfur-containing gases, i. H. the nickel sulfide formation at the grain boundaries lead to cold and red brittleness of the nickel.

In 1998, US refineries produced fuels with sulfur contents between ≤ 100 ppm and in some cases> 500 ppm (≙ 0.05 % by weight ).The EPA was in early 2000 on the assumption that 330 ppm of sulfur contained in US fuel on average. With the completion of Tier 2 , US refineries have been required to progressively reduce the sulfur content of the fuel. For the year 2004, an average sulfur content of 120 ppm (maximum 300 ppm) was allowed, until 2006, sulfur limits of an average of 30 ppm (maximum 80 ppm) had to be complied with. This corresponds to the (currently in Europe by desulphurization usual) sulfur-free motor gasoline .

The BMW M60 is a V8 gasoline engine of the car manufacturer BMW . The engine was developed from 1984, from September 1992, the BMW M60 came in various models in the sale. After the old BMW numbering system, there was an M60 from 1977, which was then led as a BMW M20 and is known hereunder. 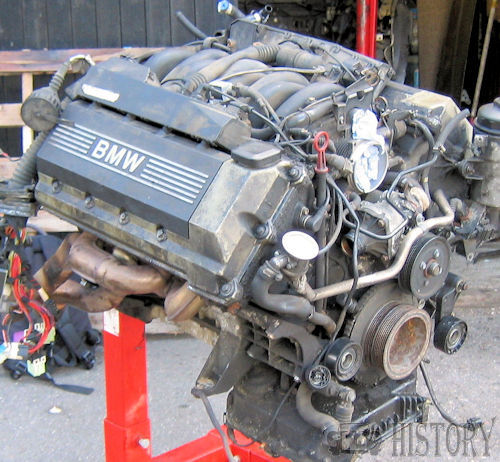 BMW used Nikasil- an aluminium, nickel, and silicon alloy- to line the cylinders of the M60 engines. In fuels with high sulfur content (such as used fuels sold in the United States, UK and South America), the sulfur damages the Nikasil bore lining, causing the engine to lose compression.BMW replaced engines under warranty and Nikasil was eventually replaced by Alusil.In the USA and UK, sulfur rich fuel is being phased out.Nikasil engines are unlikely to be a problem today, as cars with affected engines are off the road or have received replacement engines.