The BMW M57 is a straight-6 diesel engine produced from 1998. It is produced in the upper Austrian engine plant in Steyr.

The BMW M57 is a water cooled turbocharged inline six-cylinder - diesel engine with common rail injection proper. Many features were essentially adopted from the previous M51 engine . The M57 received two technical revisions in about ten years of construction . The crankcase of the engine is made of gray cast iron until the second technical revision (TÜ2) , starting from the TÜ2 made of aluminum. In the course of TÜ2 and the engine combustion chamber has been redesigned.The injection pressure is at 2.5-liter base engine 1350 bar,  with all other motors M57-1600 bar. The fuel is injected by solenoid valves, with the exception of the M57D30TÜ2OL and the M57D30TÜ2TOP with piezo injectors. The fuel pump comes just as the DDE-5-injection control device from Bosch .  There are different combinations of turbochargers. Built in 2004, the M57D30TÜTOP has a KP39 high-pressure supercharger and a K26 low-pressure supercharger from BorgWarner .  The M57 engines use a compression ratio of 16.5: 1 to 18: 1, , in particular the motors of the upper power levels with more than one turbocharger here have a lower compression. Each cylinder of an M57 has four valves, in total there are 24 valves. The valves are of two chain-driven overhead cam actuated. In the intake pipes of this motor are the date of construction, transmission and emission standard configuration swirl flaps . These cause the improvement of the Zylinderfüllgrads and thus the saving of fuel and emissions. In some cases, the swirl mechanics of the engine variants tend to break before the technical revisions (TU and TU2) under the permanent load of the swirl flaps made of metal here. This can cause dissolved swirl flaps to enter the combustion chamber and damage the piston and cylinder head. Since the first technical revision (TU), the swirl mechanism is made of plastic and the reliability increased.

The M57 is a water-cooled and turbocharged inline six cylinder diesel engine with common-rail-injection. It was revised twice during its production time. It is based on its predecessor M51. The block and the crankcase of the first M57 engines and the TÜ (Technische Überarbeitung = revision) engines are made of cast iron, TÜ2 engines are made of aluminium instead. The combustion chamber was also changed in the TÜ2. The injection pressure is 1350 bar in the 2.5l engine, all other engines use a pressure of 1600 bar instead. For fuel injection, magnetic injectors are used, except from the TÜ2 OL and TOP engines, which make use of piezo injectors. The common-rail-system is made by Bosch and also controlled by a Bosch DDE 5 ECU.The M57 is equipped with one Garrett GT2556V turbocharger and an intercooler, except from the M57D30TÜTOP, which has a BorgWarner KP39 high-pressure and a K26 low-pressure turbocharger. The compression ratio reaches from 16,5:1 to 18:1, M57 engines with higher power output and more than one turbocharger have a lower compression ratio. Every cylinder has two inlet and two outlet valves as well as two chain-driven overhead camshafts. 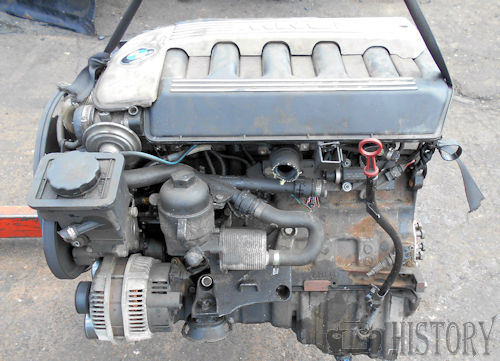 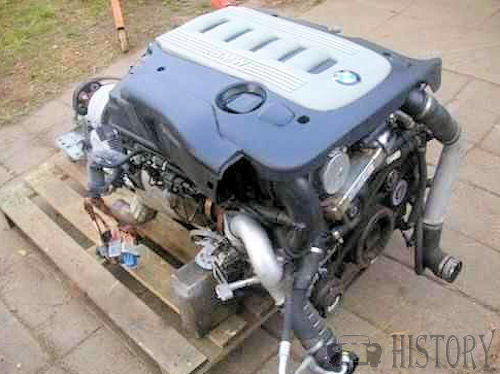