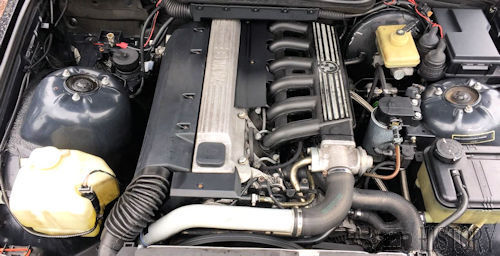 The BMW M51 is an inline diesel engine produced by the upper austrian BMW plant in Steyr from July 1991 through February 2000. Its predecessor is the BMW M21, the successor is the BMW M57.This is a straight six-cylinder diesel engine from the car manufacturer BMW . The vortex chamber engine with distributor injection pump was produced in series from 1991 to 2000, and the pre-series production started on April 2, 1990 at the BMW plant in Steyr .  The predecessor, the M21 , the successor is produced since 1998 M57 , a common-rail diesel with direct injection .

The M51 is a water cooled turbocharged inline six-cylinder - diesel engine with Bosch VP20- swirl chamber injection . Some engine variants in addition to the turbocharger have an intercooler, these engines are in BMW vehicles by the word tds be seen.  The M51 has a from gray cast iron produced engine block and a chain-driven overhead camshaft ,actuates the two valves per cylinder. Unlike its predecessor, the M51 has a hydraulic valve lash adjuster with hydraulic tappets .  amount for all motors bore and stroke 80 x 82.8 mm, which results in displacement of 2497 cc of a, BMW, however, are in operating instructions and 2498 cm³ of. The compression of the engine is 22: 1.  Fuel injection is controlled by the Bosch DDE 2.1 engine control unit .

The engine was also used in the Opel Omega and replaced the four-cylinder turbo diesel engine with 2.3 l displacement. Opel highlighted the high level of refinement, the high torque at low speeds and the simultaneously low fuel consumption. In this embodiment, the diesel engine had turbocharging on with intercooling and electronically controlled fuel injection, exhaust gas recirculation (recirculation rate up to 35% of the total volume flow) and adapted to this engine oxidation catalyst with 1.8 l volume. The maximum boost pressure of the exhaust gas turbocharger was 1 bar. With 38.5 kW per liter displacement, a remarkable power density was achieved. The intercooling caused by reducing the nitrogen oxide emissions , a thermal relief of the engine. The last BMW M51 for the Opel Omega was produced on 27 November 2000th

With the introduction of diesel engine in the 7 Series ( BMW 725tds ) in April 1996, there was a revised version of the M51D25 OL , the M51D25TÜ OL (TÜ = technical revision). The highest torque of 280 Nm reaches this engine at a speed of 2200 min  . The increase in the maximum torque by 20 Nm was achieved through a series of detailed improvements: Injection and mixture formation were retuned and the exhaust gas turbocharger developed thermodynamically. In addition, the air mass supplied to the engine is no longer as previously on boost pressureand charge air temperature determined, but directly via a hot-film air mass meter . Digital Diesel Electronic (DDE) is now networked via CAN bus . For lubrication of the engine oil with viscosity SAE 5W-40 is recommended. 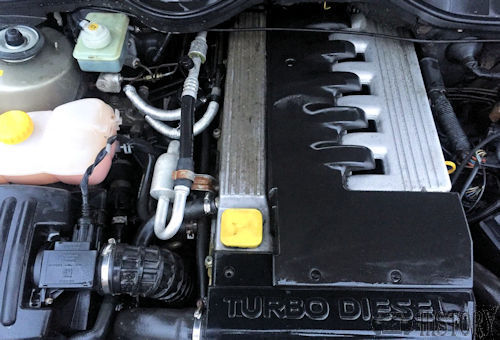