Like its predecessor, it was a cab transporter with a built-in between driver and passenger seat engine whose power was transmitted to the rear axle with cardan shaft. From the predecessor he distinguished in the body area some details:

In 1970, BLMC dropped the brand name BMC and the 350 EA was now marketed as Leyland EA. At the same time, the model range was revised. A new long-wheelbase version was introduced, which now has a cargo capacity of 9.1 m³ with short wheelbase and 11 m³ at long wheelbase in the van was available. The payload was increased to 1 ½ to 2 tons, bringing the total weight over 3500 kg and the name 350 was omitted in the name. Now again a chassis with cab for bodies was offered.

In advertising, Leyland spoke of a "box on wheels" or "plain, practical and packed with power." As was the case with BLMC at the time, the quality of construction and reliability varied. As a result, the EA never reached fleet sales like the Morris LD Van , but was nevertheless a familiar sight on the roads of the United Kingdom of Great Britain and Ireland in the 1970s. Apart from the Commonwealth countries , he also achieved some sales successes in continental Europe. 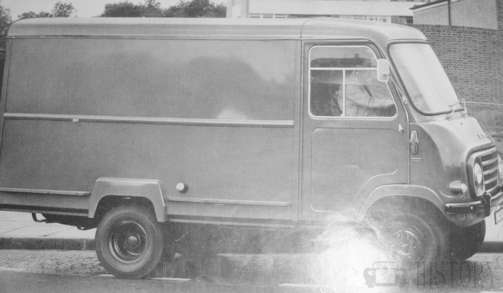