The Austin Freeway is an automobile which was developed by the Australian division of the British Motor Corporation (BMC), based on the British Austin A60 Cambridge. Introduced in 1962, it was offered in both four-door saloon and five-door station wagon body styles.

Using the locally built 2433 cc six-cylinder "Blue Streak" engine, it represented the first attempt by BMC to challenge the dominant Holden and Ford Falcon models in the lucrative six-cylinder family car class with a locally developed vehicle. The engine was a direct development of the company's 1622cc B-series unit, cylinder dimensions in the six-cylinder unit being identical to those of its four-cylinder counterpart.

An upmarket variant, the Wolseley 24/80 sedan was also offered.

Although more expensive than its opposition, the Freeway was well equipped by contemporary standards, offering features such as windscreen washers and a fresh air heater / demister. Styling was not greatly changed from its British ancestor, although the grille treatment clearly set it apart from the Cambridge.

3,090 units were sold in its first year but volumes fell well short of those of the much more powerful six-cylinder Chrysler Valiant, introduced in Australia earlier the same year. Declining sales saw the Freeway discontinued in 1965.

The Freeway was marketed in New Zealand as both the Austin Freeway and the Morris Freeway, allowing the separate Austin and Morris dealerships in that country to sell the model.

The Austin Freeway name was subsequently used on the New Zealand market for the BMC ADO17. 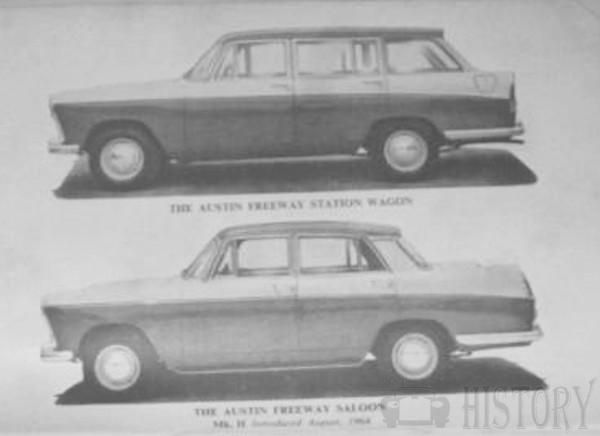