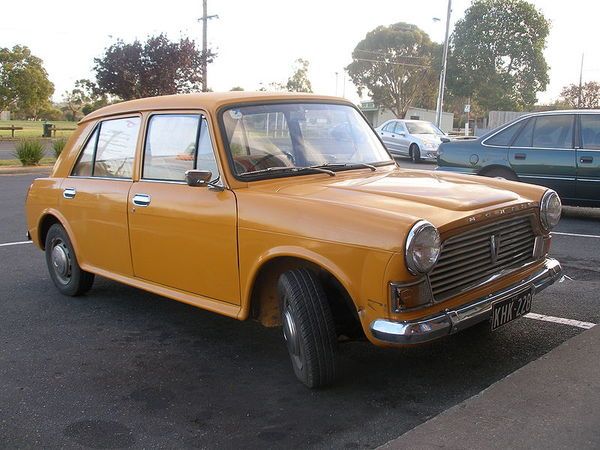 The Morris Nomad is a car which was produced by Leyland Australia for the Australian market from 1969 to 1972. It is a hatchback version of the Morris 1500 sedan, itself a locally produced BMC ADO16 design with a larger (1500 cc) engine.

The Nomad was a small - medium sized car, sitting above the Morris Mini in size and price. The hatchback styling resembles that of the Austin Maxi, which was never sold in Australia.

It was a front wheel drive car, with an all independent suspension linked by fluid filled chambers, which was called Hydrolastic suspension by the company. The suspension gave a comfortable ride, only suffering a little from "droop" if overloaded in the boot, and sometimes going into oversteer if the body rolled too much with hard cornering.

Power came from an BMC E-Series engine with a SOHC head, which provided improved performance and economy compared with the original Morris 1100 model. Four and five speed manual gearboxes were available. Automatic versions of the 1500 sedan and Nomad were fitted with the 1275cc BMC A-Series engine and Automotive Products 4 speed automatic transmission also used in the MiniMatic models and marketed as a Morris 1300 Automatic.

The body was largely identical, except with new pressings for the front and rear panels to fit with the Leyland "corporate look", and to finally get rid of the tailfins of the original model.

Austin Nomad and Austin 1500 names were used in some export markets.

The Morris 1300/1500/Nomad models were replaced in the Australian market in 1972 by the Morris Marina.