The Metro is a supermini economy car that was produced by the Austin Rover Group division of British Leyland and its successors. It was launched in 1980 as the Austin mini Metro. It was intended to complement the Mini, and was developed under the codename LC8.

During its 18-year lifespan, the Metro wore many names: Austin Metro, MG Metro and Rover Metro. It was re-badged as the Rover 100 series in January 1995. There were also van versions known as the Morris Metro and later, Metrovan. 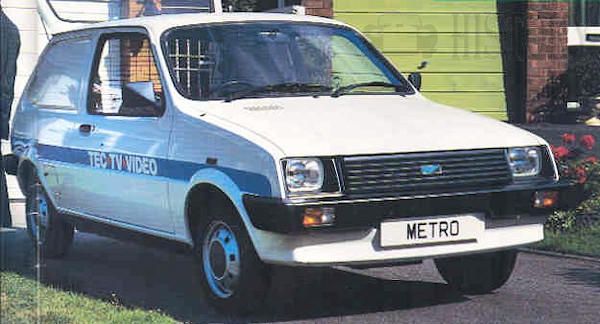 On 8 October 1980, BL introduced the Austin mini Metro. It was intended as a big brother, rather than as a replacement, for the Mini, the earlier Mini replacement project, ADO88, having been replaced in late 1977 by a new project, LC8, for the development of a larger car which could compete more effectively with the successful superminis, such as the Ford Fiesta, Vauxhall Chevette, Renault 5 and Volkswagen Polo.

Plans for a replacement for the Mini had been afoot since the early 1970s, but none of the concepts conceived early on ever reached production, largely due to a shortage of funds at British Leyland. The Longbridge plant had been expanded to enable it to produce an additional model which it was hoped would sell 100,000 or more units a year in Britain alone; production of the smaller Mini and larger Allegro was also pruned back to enable the plant to produce as many units of the Metro as possible.

Some of the Mini's underpinnings were carried over into the Metro, namely the 998 cc and 1275 cc A-Series engines, much of the front-wheel drivetrain and four-speed manual gearbox, and suspension subframes. The Metro used the Hydrolastic suspension system found on the Allegro but without front to rear interconnection. The hatchback body shell was one of the most spacious of its time and this was a significant factor in its popularity. Initially, the Metro was sold as a three-door hatchback only, with a choice of 998cc (1.0 litre) or 1275cc (1.3 litre) petrol engines.

The name was chosen through a ballot of BL employees. They were offered a choice of three names, Match, Maestro or Metro. Once the result was announced, the manufacturer of trains and buses, Metro Cammell, objected to the use of the Metro name by BL. The issue was resolved by BL promising to advertise the car only as the "Mini Metro".

A two-door saloon model was included in the Metro's development, which would have been similar in concept to the Vauxhall Chevette saloon as well as the Volkswagen Polo based Derby. However, by the time production of the Metro began, it was decided not to include a saloon version; this niche being filled by the Mini remaining in production.

At the time of its launch, the Metro was hailed as British Leyland's saviour, as the company was facing a serious financial crisis and there were fears that it could go out of business. British Leyland's troubles were largely attributed to out-of-date technology and design of most of its model range. The Mini, for example, had been in production for 21 years by the time of the Metro's launch. The Austin Allegro was seven years old and the Morris Ital was also launched in 1980 but was effectively a reworked version of the nine-year-old Morris Marina, although development of replacements for both of these cars was underway by 1980.

One of the consequences was that there was enormous public interest in the car from well before its launch. The company chose to stage the launch presentations for dealers and major company car buyers on board a cruise ship, the MS Vistafjord. The news broke in the national newspapers a full year ahead of the public launch with The Sun, among others, carrying the story. It was finally revealed to the public on the press day of the British Motor Show with the British Prime Minister, Margaret Thatcher in attendance.

The Metro quickly proved popular with buyers, and during the early part of its production life it was the best selling mini-car in the UK, before being eclipsed by the updated Ford Fiesta in 1984. Its clever interior design made it spacious considering its dimensions, and Hydragas compensation gave surprisingly good ride and handling. Its updated A+ series 1.0 and 1.3 litre OHV engines hardly represented the cutting edge in performance, but they were strong on economy.

A major TV advertising campaign was created by the London agency, Leo Burnett which came up with the headline "a British car to beat the world". The advert also featured the similar-sized Fiat 127, Renault 5, Volkswagen Polo and Datsun Cherry as "foreign invaders" and the voiceover spoke of the Metro's ability to "send the foreigners back where they came from". Following the launch of the Austin Maestro in 1983, less of British Leyland's advertising was focused on the Metro, which by 1983 had achieved strong sales. 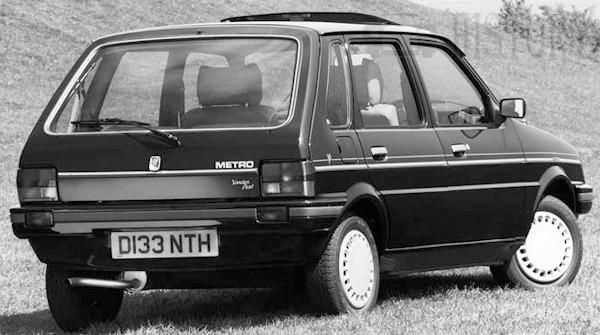 The Metro range was expanded in 1982 to include the Vanden Plas and MG versions. The Vanden Plas featured higher levels of luxury and equipment, while the slightly more powerful MG Metro 1.3 sold as a sports model (0-60 mph in 10.1 seconds, top speed 105 mph). The Vanden Plas variant received the same MG engine from 1984 onwards (with the exception of the VP Automatic, which retained the 63 bhp (47 kW) 1275 cc unit). The luxury fittings marking out the Metro Vanden Plas took the form of a radio-cassette player, electric front windows, an improved instrument panel with tachometer, and a variety of optional extras such as trip computer, leather trim, remote boot release, and front fog lamps.

The changes between the MG engine and the standard 1275 included a modified cylinder head, with larger valves and improved porting, altered cam profile and larger carburettor leading to a 20% increase in BHP. Soon afterwards, the MG Metro Turbo variant was released with a quoted bhp of 93, 0-60 mph in 8.9 seconds, and top speed of 115 mph (185 km/h). This model had a great many modifications over the normally aspirated MG model. Aside from the turbocharger and exhaust system itself, and what was (at the time) a relatively sophisticated boost delivery and control system, the MG Turbo variant incorporated stiffer suspension (purportedly with engineering input from Lotus), including a rear anti-rollbar plus uprated crankshaft.

Both MG variants were given a "sporty" interior with red seat belts, red carpets and a sports-style steering wheel. The later MG variants were emblazoned with the MG logo both inside and out, which only served to fuel claims of badge engineering from some of the more steadfast MG enthusiasts. Others believed that this sentiment was unfounded, particularly in the case of the turbo variant, due to the undeniably increased performance and handling when compared to the non-MG models. Indeed, at the time of its release, the MG Metro was the first in a succession of modern cars which heralded a spirited return of the MG marque after several years' absence of new MGs.

A mild facelift in late 1984 saw some minor styling modifications to the Metro's front end, wider suspension subframes, along with a new dashboard design and the long-awaited 5-door version.

A rear spoiler reduced drag coefficient to increase the Metro's already good fuel economy, and the hydraulic clutch (often berated as the cause of the Metro's particularly harsh gearchange) was replaced by a cable-operated mechanism. The lack of a 5-speed transmission would become a major handicap as time went on; the BMC sump-mounted gearbox was never developed to accommodate an extra gear ratio, which was a severe handicap against the opposition - by the mid-1980s the Ford Fiesta, Peugeot 205, Fiat Uno and Opel Corsa/Vauxhall Nova were all available with a 5-speed option. The Hydragas suspension also gave the car a harsh, bouncy ride despite pleas from the system's inventor, Dr. Alex Moulton, that it should be interconnected front-to-rear as opposed to side-to-side at the rear only as was found on the production version.

The Austin Metro was a huge seller in Britain, with more than 1 million being sold over a 10-year production run. The MK3 Ford Escort (1980-1990) was the only single model to outsell it in Britain throughout the 1980s, and by December 1989 only the MK3 Ford Escort was a more common model on British roads.

However, it gained a reputation for unreliability and lacklustre build quality early in its career which dented its appeal in foreign markets, where the likes of the Volkswagen Polo, Fiat Uno and Peugeot 205 were firmly established favourites.

October 2010 marked the 30th anniversary of the launch of the Metro, by now a very rare sight on Britain's roads.

Many Metros (particularly the pre-1990 Austin models) have been scrapped as a result of the bodyshell's vulnerability to rust. Also, pre-1989 Metros cannot run on unleaded fuel without expensive conversion of the cylinder head reducing these older cars' viability as everyday transport, and often resulting in premature scrappage. The original pre-1990 Metros use the same engine and transmission package as the Mini - hence they have become popular donor cars for Mini restorations and Mini-based kit cars - and as a result thousands of Metros have been broken purely for their engines to keep Minis on the road.

Including the post-1994 Rover 100 Series models, a total of just under 1,500,000 Metros were sold in Britain in less than 20 years, making it the seventh most popular ever sold there.

Lady Diana Spencer (later Diana, Princess of Wales) owned a red W-registered Metro before her engagement to Prince Charles. This car is in the Museum of British Road Transport, Coventry.