The Austin Allegro is a small family car manufactured by British Leyland under the Austin name from 1973 until 1982. The same vehicle was built in Italy by Innocenti between 1974 and 1975 and sold as the Innocenti Regent. In total, 642,350 Austin Allegros were produced during its ten-year production life, most of which were sold on the home market.

The Allegro was designed as the replacement for the popular Austin 1100 and 1300 models, designed by Sir Alec Issigonis. As with the Morris Marina, the car can be seen with hindsight as symptomatic of the enormous difficulties facing British Leyland during that period. The key factor that British Leyland can now be seen to have missed is that a much more useful and popular form of car, the hatchback, was emerging in Europe, with designs such as the Autobianchi A112, Renault 16, and Volkswagen Golf. This configuration would go on to dominate the market for small family cars in the space of a few years. British Leyland stuck to the more traditional and less versatile booted design when they launched the Allegro. This was because of internal company politics; it had been decided that the Austin Maxi should have a hatchback as its unique selling point, and that no other car in the company's line-up was allowed one. This decision hamstrung both the Allegro and the Princess, both designs naturally suited to a hatchback yet not given one.

The Allegro used front-wheel drive, using the familiar A-Series engine with a sump-mounted transmission. The higher-specification models used the SOHC E-Series engine (from the Maxi), in 1500 cc and 1750 cc displacements. The two-box saloon bodyshell was suspended using the new Hydragas system (derived from the previous Hydrolastic system used on the 1100/1300).

Stylistically, it went against the sharp-edged styling cues that were becoming fashionable (largely led by Italian designer Giorgetto Giugiaro), and featured rounded panel work. The original styling proposal, by Harris Mann, had the same sleek, wedge-like shape of the Princess, but because British Leyland management, keen to control costs, wanted to install the existing E-Series engine and bulky heating system from the Marina, it became impossible to incorporate the low bonnet line as envisaged: the bodyshell began to look more and more bloated and tubby. This was acceptable to BL, however, which according to Jeff Daniels' book—British Leyland, The Truth About The Cars, published in 1980—wanted to follow the Citroën approach of combining advanced technology with styling that eschewed mainstream trends to create long-lasting "timeless" models. Its unfashionable shape was thus not a problem. The final car bore little resemblance to Mann's original concept that had originally been conceived as an 1100/1300 re-skin. This, as well as British Leyland's faith in it as a model that would help turn the company around, led to it earning the early nickname of the "flying pig". The car was offered in the usual range of British Leyland colours; notably beige, brown, and green.

With the Allegro, the makers avoided the full extent of badge engineering that defined the marketing of its predecessor, but they nevertheless introduced in September 1974an upmarket Allegro branded as the Vanden Plas 1500/automatic: this featured a prominent grille at the front and an interior enhanced by a range of modifications designed to attract traditionally inclined customers, including special seats upholstered in real leather with reclining backrests, 'deep' carpets, extra sound insulation, a new instrument panel in walnut, nylon headlining and, for the luggage a fully trimmed boot / trunk. In 1974, a time when the UK starting price for the Austin Allegro was given as £1159, BLMC were quoting, at launch, a list price of £1951 for its Vanden Plas sibling. The Allegro name was not used on this version.

Early Allegro models featured a "quartic" steering wheel, which was rectangular, with rounded sides. This was touted as allowing extra room between the driver's legs and the base of the steering wheel. The quartic wheel did not take off, and was first dropped in 1974 when the SS was replaced by the HL, the VP 1500 was never introduced with one, despite it being featured in the owners manual. Despite this feature only having appeared on certain models for a limited time, the Allegro has always been associated with the criticism that it "had a square steering wheel". 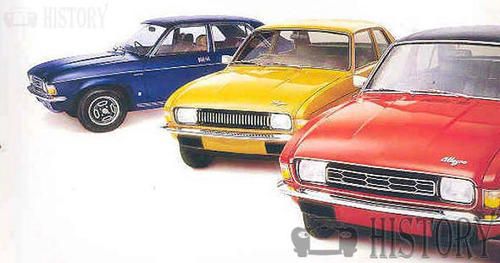