The Austin Maxi was a medium sized 5-door hatchback car produced by British Leyland in the 1970s. It was the first British five-speed five-door hatchback.

The Maxi (code name ADO14) was the last car designed under the British Motor Corporation (BMC), and was the last production car designed by Alec Issigonis. Originally under BMC's plan for its new model range, which it had been developing since 1965, the Maxi was to have been called the "Austin 1500" and a saloon version the "Morris 1500" was to follow in the autumn.

However, upon the merger of BMC and Leyland the new management ditched the four-door saloon notchback and developed the Morris Marina instead. The new chairman Lord Stokes decided to also change the hatchback's name to the Maxi in homage to the Mini of 10 years earlier.

It was launched in Oporto Portugal on 24 April 1969 in a blaze of publicity, being one of the first cars to appear on the BBC's new car programme Wheelbase, a forerunner to Top Gear. It was also the first car after the creation of British Leyland. It followed the five-door hatchback pattern of the French-produced Renault 16, which was European Car of the Year in 1966 following its launch in 1965.

Underneath the Maxi's practical and spacious bodyshell lay an all-new front wheel drive chassis, which was interlinked with an innovative five-speed manual transmission. The latter suffered from notorious problems with its control linkage, especially in early models which had a cable-operated linkage prone to cable stretch and other problems. These were noted by autotesters such as Vicar in Today´s Driver (1969) who wrote: "This is probably a good idea that just needs a little bit of working on."The later rod linkage was less problematic. All models were prone to problems brought on by the "cogs in the sump" layout, where the gearbox and engine shared a common oil supply. The clutch oil seal was also prone to leakage.

Power came from a 1485 cc, later 1748 cc (from 1971) E-Series petrol engine which would later find its way into other British Leyland products such as the Austin Allegro. The 1750 and twin-carburettor 1750 HL models offered good performance by the standards of the day.

Despite the new platform, the Maxi's styling suffered from the decision to save tooling costs by carrying over door panels from the BMC ADO17 "Landcrab", which compromised the design. Another styling ambition for the car was a four-door saloon counterpart—a prototype was built badged as a Morris, but it wasn't placed into production.

The Maxi featured a spacious interior, comfortable passenger accommodation, competitive prices and reasonable running costs, but it was let down by a dull interior and poor build quality, although it was not quite as notorious for its downfalls as the Austin Allegro and Morris Marina were during the 1970s.

One unusual feature of this car was that the rear seat back, as well as folding forward as in a conventional hatchback, also folded back. In combination with fully reclining front seats this gave satisfactory, if spartan, sleeping accommodation.

Towards the end of the Maxi's life, in 1980, a lightly revised model was marketed as the "Maxi 2". 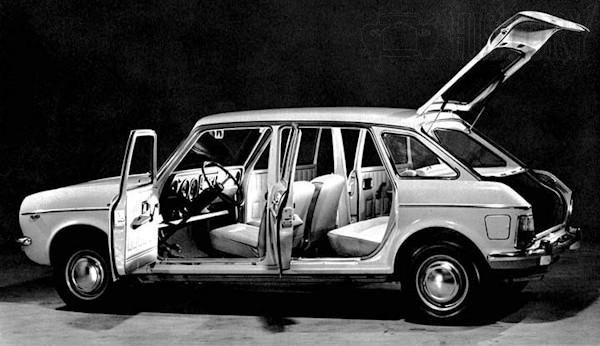 On 8 July 1981, the Austin Maxi's 12-year production life came to an end. Its effective replacement, the smaller Austin Maestro, which also replaced the smaller Allegro, was introduced in March 1983. The next new model in its sector was the Austin Montego saloon, launched in April 1984 and designed to fill the gap in British Leyland's Austin Rover range left by the demise of the Morris Ital and Austin Ambassador.

Despite its practical design and remarkable space efficiency (it is shorter, narrower and lower than the sixth generation Ford Fiesta) the Maxi never came close to reaching its projected sales targets. BL management decisions involving the Maxi had significant knock-on effects to the rest of the car line-up. BL marketing decreed that the Maxi should be the only car in the range to feature a hatchback. This stance was continued until the 1980s and prevented the Morris Marina, Austin Allegro and Princess models gaining hatchbacks despite those designs all being capable of receiving them. The only other BL cars to have a hatchback layout were the Austin Ambassador (a revised Princess) and the Rover SD1, which was a large 'four-door coupé/hatch', leaving the company without a car to compete with an up-coming generation of hatchbacks from Europe, and squandering the lead that BMC and BL had gained in this field. The success of the mid-1970s Volkswagen Golf and Volkswagen Passat hatchbacks shows the scale of the missed opportunity.

On 1 July 1969 John Lennon crashed a white Maxi in Golspie near Loch Eriboll in the Highlands of Scotland. He was on holiday with Yoko Ono, his son Julian and Yoko's daughter Kyoko.

Originally they had set off from Tittenhurst Park, his country home near Ascot in his Mini Cooper, however it soon became apparent that it was too small in which to drive all the way to Scotland, so they stayed overnight at his relatives' home in Liverpool where he rang Apple Records and arranged for a driver to bring the "staff" car, a recently acquired Snowberry White Austin Maxi with full length white webasto roof; it also featured a silver apple mounted on the radio speaker top of the front fascia.

Next morning Yoko and John transferred all their luggage over and his driver took the Mini back to Tittenhurst, and the four set off north again to Scotland. it was whilst driving the narrow lanes that John panicked and sent the Maxi headlong into a ditch. While the children escaped relatively unhurt, John received a gash to his forehead and Yoko injured her back, resulting in a hospital stay in Golspie's Lawson Memorial Hospital for five days. After they returned to London, John arranged for the Maxi to be placed on a plinth outside his Tittenhurst home as an homage to their luck, where it stayed for the next few years, during which time Julian took the silver apple from the dash and kept it as a keepsake, though it was auctioned many years later. When John and Yoko finally left the UK for New York, John sold Tittenhurst to Ringo Starr who immediately had the Maxi crushed.

Also in 1969 Mars Confectionery UK ran a competition entitled "Maxis from Mars" where a number of white Austin Maxis were driven around the country with numbers on the doors. If the number inside a Mars bar wrapper matched the Maxi a customer would see driving around, then he or she won the car. One lucky winner in Corby was so happy with winning one that the prize Maxi still survives to this day.

In 1972, a married couple escaped the Soviet quarter of Berlin at Checkpoint Charlie in the back of a Maxi. Once over into the western sector, the British Royal Military Police and the West German Polizei were so surprised that two people could fit into a Maxi's boot, that it was then taken up by Leyland West Germany and re-created in a television advert shown across West Germany, Switzerland and Austria.

Also in 1972 at the Earls Court Motor Show a competition was staged by The Daily Telegraph, the Institute of British Coachbuilders and Motor Manufactures (later incorporated into the Society of Motor Manufacturers and Traders) to design a futuristic concept car based on a Maxi. The winning design was done by young talented designer Chris Field, and the prize was to have his design on paper turned into reality. The "Aquila" was constructed by Woodhall Nicolson, of Halifax with help from Lucas, Smiths Instruments and Triplex. The resultant car was then exhibited at the 1973 show and then given to Field. He then went on the design speed cycles with help from Lotus and his designs for high speed cycles have been used through subsequent Olympic teams. The car itself still survives at Poole in Dorset.

In 1975 Dunlop Tyres, keen to prove its new "Worldbeater" tyre range, drove two white Maxi 1750HLs around the globe, visiting Europe, the Middle East, India, Australia and through the USA. Upon their return to the UK, Dunlop made an advert featuring a similar Maxi using some footage shot on the trip, in which the wife says to her husband that she is "popping down the shops" while he watches the Saturday afternoon sport. She then proceeds to drive the Maxi onto a hovercraft and go past the Eiffel Tower, across Saint Peter's Square, along the Saudi Highway and on to the Taj Mahal. She then walks back into the house, while the football results are on, carrying exotic Indian shopping and her husband looks on in surprise.

From 1975 up until 1980 British Leyland supplied the Lawn Tennis Association every year with official "Wimbledon" Maxis. These were standard single carburettor 1750s but fitted with HL velour seat trim and extra sound proofing. Afterwards they were sold through local Surrey dealers as ex-demonstration cars. 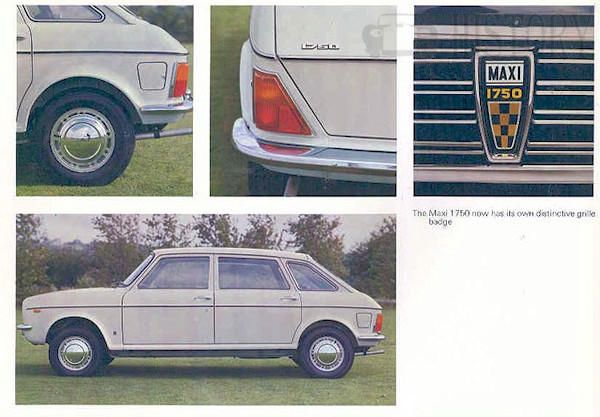 In November 1979 during the Islamic Revolution in Tehran Iran one of the British embassy's first secretaries rescued five American diplomats who had managed to escape the stormed US Embassy in his own private British registered sandglow Maxi 1750HL complete with its GB sticker, once rescued the British secretary then discovered that the British Embassy had now also been overrun, and so undertook a treacherous drive across Tehran to the north of the city to the British compound of Gholhak. Once at Gholhak, the British diplomats and families smuggled the Americans in the Maxi again to the home of a Thai cook who worked for someone at the US embassy. Ten days later they moved on to the home of the Canadian number two diplomat from where the CIA hatched a plot to rescue their diplomats using Canadian passports and posing as movie makers. This was the basis for the US film Argo (2012). However, in this dramatization, the British role (and subsequently the Maxi's) were written out, as director Ben Affleck stated he wished to make the escaped diplomats look helpless and desperate to the studio audience. 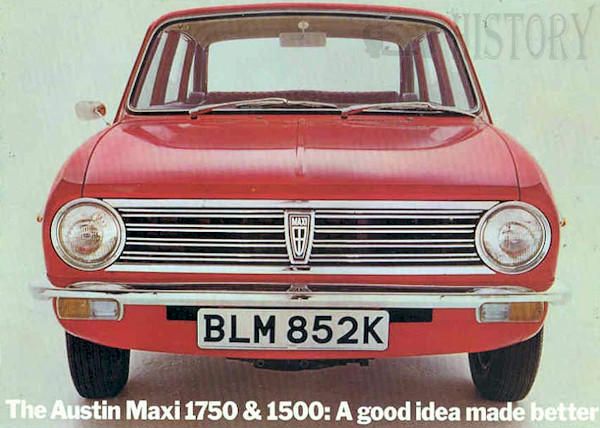 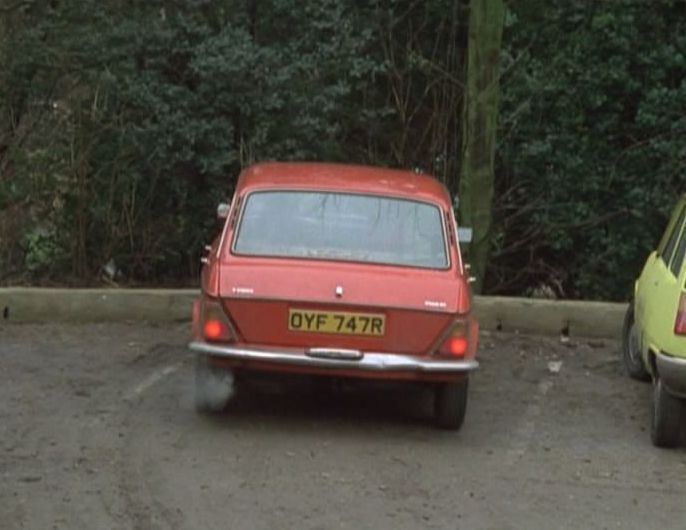