British Leyland was a vehicle-manufacturing company formed in the United Kingdom in 1968 as British Leyland Motor Corporation Ltd (BLMC). It was partly nationalised in 1975, when the UK government created a holding company called British Leyland, later BL, in 1978. It incorporated much of the British-owned motor vehicle industry, and held 40 percent of the UK car market, with roots going back to 1895.

Despite containing profitable marques such as Jaguar, Rover and Land Rover, as well as the best-selling Mini, British Leyland had a troubled history. In 1986 it was renamed as the Rover Group, later to become MG Rover Group, which went into administration in 2005, bringing mass car production by British-owned manufacturers to an end. MG and the Austin, Morris and Wolseley marques became part of China's SAIC, with whom MG Rover attempted to merge prior to administration.

was created in 1968 by the merger of British Motor Holdings (BMH) and Leyland Motor Corporation (LMC),encouraged by Tony Benn as chairman of the Industrial Reorganisation Committee created by the Wilson Government (1964–1970). At the time, LMC was a successful manufacturer, while BMH was perilously close to collapse. The Government was hopeful LMC's expertise would revive the ailing BMH. The merger combined most of the remaining independent British car manufacturing companies and included car, bus and truck manufacturers and more diverse enterprises including construction equipment, refrigerators, metal casting companies, road surface manufacturers; in all, nearly 100 different companies. The new corporation was arranged into seven divisions under its new chairman, Sir Donald Stokes (formerly the chairman of LMC).

While BMH was the UK's largest car manufacturer (producing over twice as many cars as LMC), it offered a range of dated vehicles, including the Morris Minor which was introduced in 1948 and the Austin Cambridge and Morris Oxford, which dated back to 1959. After the merger, Lord Stokes was horrified to find that BMH had no plans to replace these elderly designs. Also, BMH's design efforts immediately prior to the merger had focused on unfortunate niche market models such as the Austin Maxi (which was underdeveloped and with an appearance hampered by using the doors from the larger Austin 1800) and the Austin 3 litre, a car with no discernible place in the market.

BMH had produced several successful cars, such as the Mini and the Austin/Morris 1100/1300 range (which at the time was the UK's biggest selling car). While these cars had been advanced at the time of their introduction, the Mini was not highly profitable and the 1100/1300 was facing more modern competition.

The lack of attention to development of new mass-market models meant that BMH had nothing in the way of new models in the pipeline to compete effectively with popular rivals such as Ford's Escort and Cortina.

Immediately, Lord Stokes instigated plans to design and introduce new models quickly. The first result of this crash program was the Morris Marina in early 1971. It used parts from various BL models with new bodywork to produce BL's mass-market competitor. It was one of the strongest-selling cars in Britain during the 1970s, although by the end of production in 1980 it was widely regarded as a dismal product that had damaged the company's reputation. The Austin Allegro (replacement for the 1100/1300 ranges), launched in 1973, earned a similarly unwanted reputation over its 10-year production life.

The company became an infamous monument to the industrial turmoil that plagued Britain in the 1970s. At its peak, BLMC owned almost 40 manufacturing plants across the country. Even before the merger BMH had included theoretically competing marques that were in fact selling substantially similar "badge engineered" cars. To this was added the competition from yet more, previously LMC marques. Rover competed with Jaguar at the expensive end of the market, and Triumph with its family cars and sports cars against Austin, Morris and MG. The result was a product range which was incoherent and full of duplication. In addition, in consequent attempts to establish British Leyland as a brand in consumers' minds in and outside the UK, print ads and spots were produced, causing confusion rather than attraction for buyers. This, combined with serious industrial relations problems (with trade unions), the 1973 oil crisis, the three-day week, high inflation, and ineffectual management meant that BL became an unmanageable and financially crippled behemoth which went bankrupt in 1975. 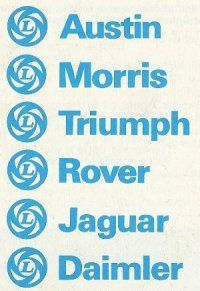 Sir Don Ryder was asked to undertake an enquiry into the position of the company, and his report, The Ryder Report, was presented to the government in April 1975. Following the report's recommendations, the organisation was drastically restructured and the Labour Government (1974–1979) took control by creating a new holding company British Leyland Limited (BL) of which the government was the major shareholder. Between 1975 and 1980 these shares were vested in the National Enterprise Board which had responsibility for managing this investment. The company was now organised into the following four divisions:

There was positive news for BL at the end of 1976 when its new Rover SD1 executive car was voted European Car of the Year, having gained plaudits for its innovative design. The SD1 was actually the first step that British Leyland took towards rationalising its passenger car ranges, as it was a single car replacing two cars competing in the same sector: the Rover P6 and Triumph 2000. More positive news for the company came at the end of 1976 with the approval by Industry Minister Eric Varley of a £140 million investment of public money in refitting the Longbridge plant for production of the company's "ADO88" (Mini replacement) model, due for launch in 1979. However, the UK success of the Ford Fiesta, launched in 1976, redefined the small car class and ADO88 would soon be cancelled. Massive investment in the Longbridge plant would nevertheless take place in preparation for the introduction of the slightly larger "LC8" subcompact hatchback, which would be launched as the Austin Mini Metro.

In 1977 Sir Michael Edwardes was appointed chief executive by the NEB and Leyland Cars was split up into Austin Morris (the volume car business) and Jaguar Rover Triumph (JRT) (the specialist or upmarket division). Austin Morris included MG. Land Rover and Range Rover were later separated from JRT to form the Land Rover Group. JRT later split up into Rover-Triumph and Jaguar Car Holdings (which included Daimler)

In 1978 the company formed a new group for its commercial vehicle interests, BL Commercial Vehicles (BLCV) under managing director David Abell. The following companies moved under this new umbrella: 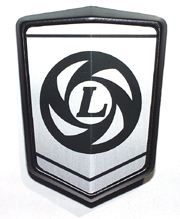 In 1979 British Leyland Ltd was renamed to simply BL Ltd (later BL plc) and its subsidiary which acted as a holding company for all the other companies within the group The British Leyland Motor Corporation Ltd to BLMC Ltd.

BL's fortunes took another much-awaited rise in October 1980 with the launch of the Austin Metro (initially named the Mini Metro), a modern three-door hatchback which gave buyers a more modern and practical alternative to the iconic but ageing Mini. This went on to be one of the most popular cars in Britain of the 1980s. Towards the final stages of the Metro's development, BL entered into an alliance with Honda to provide a new mid-range model which would replace the ageing Triumph Dolomite, but would more crucially act as a stop-gap until the Austin Maestro and Montego were ready for launch. This car would emerge as the Triumph Acclaim in 1981, and would be the first of a long line of collaborative models jointly developed between BL and Honda. By 1982 the BL Cars Ltd division renamed itself Austin Rover Group, shortly before the launch of the Maestro and Michael Edwardes was replaced by Harold Musgrove as chairman and chief executive. Jaguar and Daimler remained in a separate company called Jaguar Car Holdings, but were later sold off and privatised in 1984.

A rationalisation of the model ranges also took place around this time. In 1980, British Leyland was still producing four cars in the large family car sector—the Princess 2, Austin Maxi, Morris Marina and Triumph Dolomite. The Marina became the Ital in August 1980 following a superficial facelift, and a year later the Princess 2 received a major upgrade to become the Austin Ambassador, meaning that the 1982 range had just two competitors in this sector. In April 1984, these cars were discontinued to make way for a single all-new model, the Austin Montego. The Triumph Acclaim was replaced in that same year by another Honda-based product – the Rover 200-series.

In 1984 Jaguar Cars became independent once more, through a public sale of its shares. Ford subsequently acquired Jaguar. In 1986 BL changed its name to Rover Group and in 1987 the Trucks Division – Leyland Vehicles merged with the Dutch DAF company to form DAF NV, trading as Leyland DAF in the UK and as DAF in the Netherlands. In 1987 the bus business was spun off into a new company called Leyland Bus. This was the result of a management buyout who decided to sell the company to the Bus & Truck division of Volvo in 1988.

In 1986 Graham Day took the helm as chairman and CEO and the third joint Rover-Honda vehicle – the Rover 800-series – was launched which replaced the 10-year old Rover SD1. That same year, the British government controversially tried to reprivatise and sell-off Land Rover, however this plan was later abandoned. 1987 saw the Austin name dropped on the Metro, Maestro and Montego, signalling the end for the historic Austin marque, in a push to focus on the more pretigious (and potentially more profitable) Rover badge. In 1988 the business was sold by the British Government to British Aerospace (BAe), and shortly after shortened its name to just Rover Group. They subsequently sold the business to BMW, which, after initially seeking to retain the whole business, decided to only retain the Cowley operations for MINI production and close the Longbridge factory. Longbridge, along with the Rover and MG marques, was taken on by MG Rover which went into administration in April 2005.

Many of the brands were divested over time and continue to exist on the books of several companies to this day.

The Leyland name and logo continues as a recognised and respected marque across India, the wider subcontinent and parts of Africa in the form of Ashok Leyland. Part of the giant Hinduja Group, Ashok Leyland manufactures buses, trucks, defence vehicles and engines. The company is a leader in the heavy transportation sector within India and has an aggressive expansionary policy. Ironically, since 1987, when the London-based Hinduja Group bought the Indian-based Ashok Leyland company, it is once again a British-owned brand. Today, Ashok-Leyland is pursuing a joint venture with Nissan and through its acquisition of the Czech truck maker, Avia, is entering the European truck market directly. With its purchase, in 2010, of a 25 per cent stake in UK-based bus manufacturer Optare, Ashok Leyland has taken a step closer to reconnecting with its British heritage, as Optare is a direct descendant of Leyland's UK bus-making division.

Biritish Leyland also provided the technical know-how and the rights to their Leyland 28 BHP tractor for Auto Tractors Limited, a tractor plant in Pratapgarh, Uttar Pradesh. Established in 1981 with state support, ATL only managed to build 2,380 tractors by the time the project was ended in 1990 - less than the planned production for the first two years. The project ended up being taken over by Sipani, who kept producing tractor engines and also a small number of tractors with some modest success.