The CD2 was a two-door hatchback coupe based on the Australian Holden Monaro and the identical Pontiac GTO . The vehicle was presented in 2004 at the Geneva Motor Show. There were only two prototypes.

Bitter pursued the concept of modifying heavily motorized Australian GM vehicles for the European market with the Vero model.On 70th birthday, Erich Bitter makes a great present for himself and his fans: he announces the revival of the Bitter brand. In parallel, the company celebrates the 40th anniversary of the brand and its first CD model. As a result, at the Geneva Motor Show in 2003, the second-generation Bitter CD coupe premiered.

Erich Bitter slightly changed the front of his brainchild, for the first time abandoning the rising headlights. However, it is worth noting that retractable headlights in a raised form pose a danger to pedestrians when hitting, and therefore, according to European safety requirements, they are simply prohibited for use.

The standard equipment of the new supercar included air conditioning, a navigation system, leather and wood trim, electric windows and mirrors, and cruise control, unusual for Europeans. It was supposed to start serial production of the car at a price of 127 thousand euros, but the order portfolio was not even formed, and Erich Bitter was able to build only two of these cars.

The two-door is based on the Holden Monaro model with the 6.2 liter V8 Chevrolet LS2 engine with 400 hp output. and a torque of 546 Nm, which is transmitted to the rear axle using a six-speed “mechanics” Tremec T-56 or a four-speed automatic transmission. Maximum speed reaches 290 km / h. 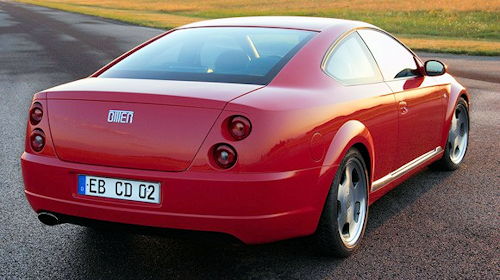