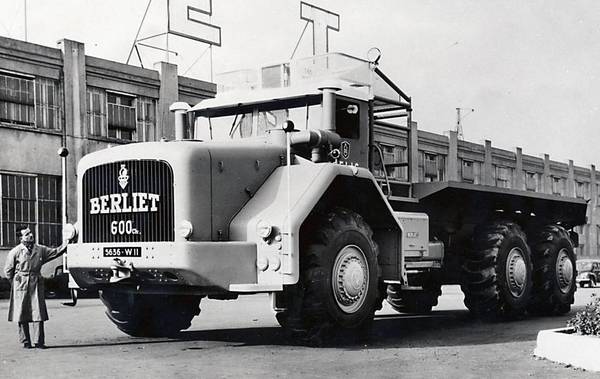 The Berliet T100 was a truck manufactured by Berliet. It was, at the time, the largest truck in the world.

Three trucks were built with a conventional design, with the cab behind the front axle; the fourth was built with a cab-over-engine design (and sleeping accommodation). They had 29.6 litre Cummins V12 engines providing 600 hp (447 kW) and 700 hp (522 kW). The trucks were intended for offroad use, in the oil and mining industries, in particular petroleum exploration in the Sahara. Steering was powered by a separate small Panhard engine.

The first two trucks were 6x6 flatbeds with gross weights of 103 tonnes; the third was built as a 6x4 dumper truck, for the uranium mine at Bessines-sur-Gartempe; the fourth was another flatbed truck with 102 tonne gross weight, or 190 tonnes as a tractor. It was experimentally fitted with a Turbomeca jet engine in 1962, but fuel consumption was excessive, so the conventional diesel engine was fitted again.

The trucks were designed and built in secret, and with a tight deadline; the first was finished after nine months, at the factory in Courbevoie. It was unveiled, by surprise, at the 1957 Paris car show. However, it was too big to fit in the main exhibition hall, so Berliet built a special external pavilion to exhibit the huge new truck. It was then shown at various other car shows - Lyon, Avignon, Helsinki, Casablanca, Frankfurt, and Geneva. It went to work in the oil and gas fields of the Sahara; after Algerian independence it became property of the Algerian government, and was eventually preserved in Hassi-Messaoud.

The second T100, having worked in Algeria, was later returned to the Berliet Foundation's museum in 1981.

The trucks were stablemates of the Berliet GBO15, a 60-ton 6x6 truck which had been released in 1956. 45 were built, most exported to Algeria.