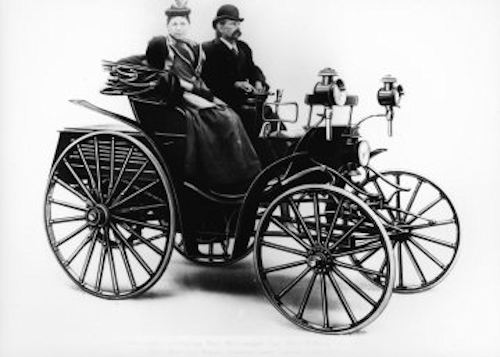 It sold in large numbers across Germany when it was first sold.Up to the beginning of the eighteen-nineties.

One of the reasons for the poor commercial success of Benz's first vehicle was that it was a tricycle. So from 1891 Benz embarked on

solving the front wheel steering problem. Two years later he did so by swiveling the wheels independently on king pins, and he was granted

a patent. The new car was called Victoria symbolizing victory over the steering problem.

With the design of an effective axle-pivot steering (DRP 73151 of 28th Februar 1893) this path was paved for four-wheeled vehicles.

In 1893 Benz  the model "Victoria" available was also a four-seated version with face-to-face seat benches,called the model "Vis-à-Vis". 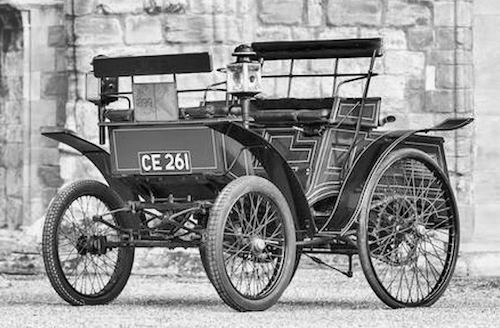 The vehicle's excellent properties were tested not only in city traffic but also on longer distances. In 1894, the year Count Albert de Dion organized the very first Paris- Rouen car racer a textile industrialist, Baron Theodor Liebig entered for a long-distance race in Liberec, now in Czechoslovakia, at the wheel of

his Victoria. He and his friend Stransky chose the route from Liberec via Mannheim to Rheims and back On the first day they reached the

top speed of 22km/h (14mph), The next stop-over was at Eisenberg and Eisenach. The fourth day was the most strenuous, a non-stop

a ball in his honour. The following day the drive continued to Gondorf with a longer stop-over. By now the automobile had covered 1000 km

(620 mi). The pace from Condorf to Rheims and back to Liberec was less hectic. Liebig recorded his experience in a diary, ending up with

the following: 'One of the things we appreciate highly is that Benz's car has made us aware of all the beautiful places that exist in the

The Benz Victoria, in which Baron Liebig covered the 2500 km (1550 mi) route, was fitted with a horizontal single-cylinder engine.

water-cooled engine was mounted at the rear, and it drove the rear axle by means of flat belts and two chains. The hand-brake controlled the

back wheels, which were fitted with solid rubber tyres.

The Victoria was Benz's favourite car. It was made in different versions, such as Vis-å-vis or Phaeton, until 1899.

Both variations recieved displacement and performance changes ,that were continuously enlarged and improved up to the end of production in 1900.