The Benz Velo was one of the first cars. Introduced by Karl Benz in 1894 as the followup to the Patent Motorwagen, the Velo is credited, together with the Duryea Motor Wagon, patented in 1895, as one of two first standardized cars. 67 Benz Velos were built in 1894 and 134 in 1895. The early Velo had a 1L 1.5 hp engine and later a 3 hp engine giving a top speed of 12 mph (20 km/h). The Velo was officially introduced by Karl Benz as the Velocipede, and became the world's first large-scale production car. The Velocipede remained in production between 1894 and 1902, with a final count of over 1,200 produced. It was the first car introduced to South-Africa and was demonstrated to then President Paul Kruger on 4 January 1897.

Karl Benz patented the world's first stationary, static Internal combustion engine. His patent created a great demand for his vehicles, forcing Benz to move his operations in 1886 to a new factory on Waldhofstrasse in Mannheim (operating until 1908). Benz had appointed a Board of Management to help aid his growing company. These appointees suggested to Benz that he should create a less-expensive automobile suitable for mass-production. In response, Benz engineered a two-passenger automobile with a 3-horsepower engine, which he called the Victoria. This preceding model could reach a top speed of 11 miles per hour (18 km/h), and utilized a pivotal front-axle operated by a roller-chained tiller for steering. 85 units of the Victoria were produced. Improving on these designs, Benz created his Benz Velo. 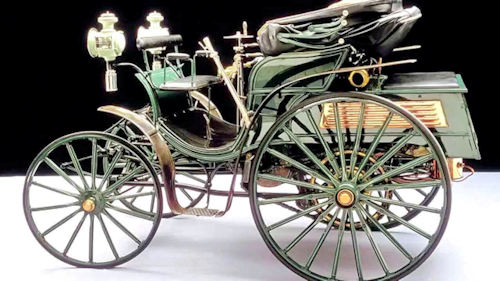 The Velo also inspired numerous copies, including Marshall (later Belsize) in Manchester, Star(Wolverhampton), and Arnold (Paddock Wood, of which only twelve were built). Benz's Velo was particularly popular in France, where a Parisian bicycle manufacturer by the name of Émile Roger had been building Benz engines under license from Karl Benz. Roger began building Benz automobiles as well, and as a result, a majority of Benz automobiles were sold in France initially. Many British Inventors also used Benz's patents and automobiles as starting points for their own innovations. Frederick W. Lanchester, of Birmingham, built a four-wheeled petrol-driven automobile, similar to units previously designed by Benz, which had utilized an electric starter (an adaption first seen in the Benz Velo).

Karl Benz's Velo participated in the world's first automobile race. A Parisian daily newspaper, by the name of Le Petit Journal, organized the race. The editors of Le Petit intended to display horseless carriages as a viable means of transportation. Rather than fastest time, the automobiles would be judged on whether they were safe and cost effective to operate. It took place in 1894, starting in Paris and ending in Rouen. The winners of the Paris-Rouen race were Panhard & Levassor (Panhard) and Peugeot, both French manufacturers using Benz internal combustion engines. The Velo placed 5th overall in Le Petit's race. Benz had proven with this race that his engines and his automobiles were not only attainable, but also safe and reliable to operate. 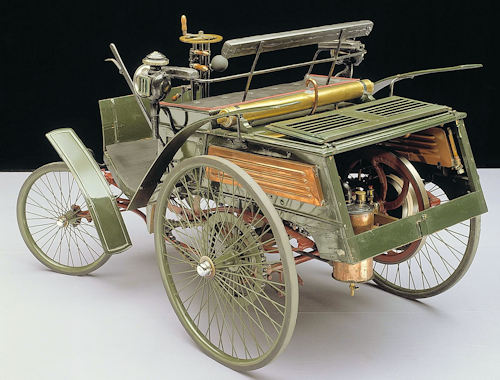