The success of the company gave Benz the opportunity to indulge in his old passion of designing a horseless carriage. Based on his experience with, and fondness for, bicycles, he used similar technology when he created an automobile. It featured wire wheels (unlike carriages' wooden ones)  with a four-stroke engine of his own design between the rear of the three wire-spoked wheels, with a very advanced coil ignition and evaporative cooling rather than a radiator.

The "Velocipede" Power was transmitted by means of two roller chains to the rear axle. Karl Benz finished his creation in 1885 and named it "Benz Patent Motorwagen".

It was the first automobile entirely designed as such to generate its own power, The engine output was 0.75 hp (0.55 kW) not simply a motorized stage coach or horse carriage, which is why Karl Benz was granted his patent and is regarded as its inventor.

The Motorwagen was patented on 29 January 1886 as DRP-37435: "automobile fueled by gas". The 1885 version was difficult to control, leading to a collision with a wall during a public demonstration. The first successful tests on public roads were carried out in the early summer of 1886. The next year Benz created the Motorwagen Model 2, which had several modifications, and in 1889, the definitive Model 3 with wooden wheels was introduced, showing at the Paris Expo the same year.

Benz began to sell the vehicle (advertising it as "Benz Patent Motorwagen") in the late summer of 1888, making it the first commercially available automobile in history. The second customer of the Motorwagen was a Parisian bicycle manufacturer Emile Roger, who had already been building Benz engines under license from Karl Benz for several years. Roger added the Benz automobiles (many built in France) to the line he carried in Paris and initially most were sold there.

The early 1888 version of the Motorwagen had no gears and could not climb hills unaided. This limitation was rectified after Bertha Benz made her famous trip driving one of the vehicles a great distance and suggested to her husband the addition of brake linings to act as brake pads.

An important part in the Benz story is this first long distance automobile trip, where the entrepreneurial Bertha Benz, supposedly without the knowledge of her husband, on the morning of 5 August 1888, took this vehicle on a 106 km (66 mi) trip from Mannheim to Pforzheim to visit her mother, taking her sons Eugen and Richard with her. In addition to having to locate pharmacies on the way to fuel up, she repaired various technical and mechanical problems and invented brake lining. After some longer downhill slopes, she ordered a shoemaker to nail leather on the brake blocks. Bertha Benz and sons finally arrived at nightfall, announcing the achievement to Karl by telegram. It had been her intention to demonstrate the feasibility of using the Benz Motorwagen for travel and to generate publicity in the manner now referred to as live marketing. Today, the event is celebrated every two years in Germany with an antique automobile rally. In 2008, the Bertha Benz Memorial Route was officially approved as a route of industrial heritage of mankind, because it follows Bertha Benz's tracks of the world's first long-distance journey by automobile in 1888. Now everybody can follow the 194 km of signposted route from Mannheim via Heidelberg to Pforzheim(Black Forest) and back. The return trip was along a different, slightly shorter, itinerary, as shown on the maps of the Bertha Benz Memorial Route.

Benz's Model 3 made its wide-scale debut to the world in the 1889 World's Fair in Paris; about twenty-five Motorwagens were built between 1886 and 1893. 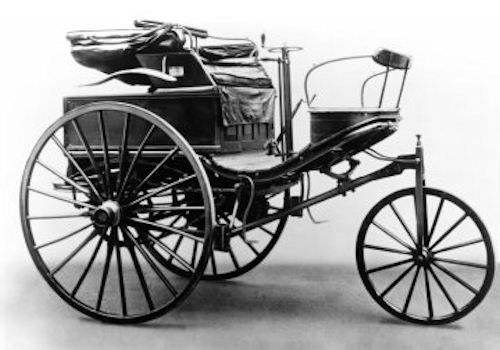