The Bentley Azure is a large, four seater convertible built by Bentley Motors Limited at its factory in Crewe, England. The model debuted in 1995 on the Continental platform and was produced in its original guise until 2003. A completely new version powered by a significantly updated engine and riding on the newer Arnage platform debuted in 2006. According to 2009 research by internet company Yahoo, the Azure is the fourth most fuel consuming car on sale in the United Kingdom

The Azure debuted in March 1995 at the Geneva Motor Show on the platform of the Continental R model, which had been originally launched in 1991. Production only crept to a start, with a mere nine examples finished in the first year - in 1996, after full production had started, no less than 251 Azures were finished Pininfarina assisted in the two-year process of turning the Continental R into a full four-seater convertible, and also built the shell and soft-top at their factory in Italy, largely from parts sourced in the UK. Final assembly was then carried out at Crewe. A roll-bar was never considered, which necessitated extensive reinforcing of the chassis.At 210 in (5,340 mm) in length and 5,750 pounds (2,610 kg) in weight, the Azure often surprised onlookers with its size and bulk, intended to both convey a sense of "presence" and allow for comfortable seating of four adult passengers.

Power came from the company's stalwart 6.75 liter V8, featuring a single, intercooled Garrett turbocharger and producing in the region of 360 hp - Rolls-Royce and Bentley did not yet give official power numbers at the time of the Azure's introduction. By the time production began in earnest, new engine management from Zytek meant a slight power increase to 385 hp (287 kW; 390 PS) at 4,000 rpm and 750 N·m (553 lb·ft) of torque at 2,000 rpm; power was routed to the rear wheels via a modified, General Motors sourced, four-speed automatic transmission. With a zero to sixty miles per hour time of 6.3 seconds (0–100 km/h in 6.5 s) and a top speed of 241 km/h (150 mph), the Azure was very fast for a car of its size, weight and poor aerodynamic profile. 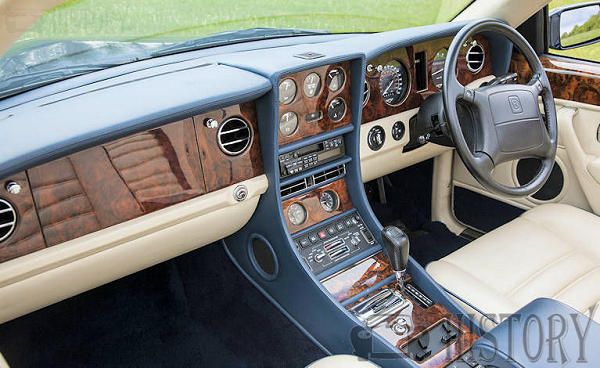 Owing to the limited space and workforce at Bentley's Crewe factory, the Azure's thick, powered convertible top was designed and manufactured by Pininfarina, which significantly added to the vehicle's cost. New in 1995, the Azure was priced at $347,645 -- $36,355 more than the Continental R on which it was based.

From 1999 through the end of production, the Azure was also available in "Mulliner" trim, which added special bespoke trim and additional equipment and allowed the buyer the option for further customization during the build-process; pricing varied by car, as equipment could be significantly different from one to the next depending on customer requests. 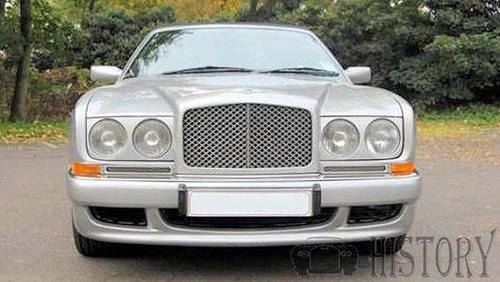