The Bentley Turbo R was a high-performance model produced by Bentley Motors Limited. The "R" stood for "roadholding", to set it apart from its predecessor. It initially inherited the turbocharged engine from the Mulsanne Turbo and also sported a retuned suspension and wider tires on alloy wheels, a first for a Bentley. From the 1987 model year (20,000 series chassis numbers), however, the Turbo R's V8 engine was retuned with fuel injection for added torque. Motor Trend called the Turbo R "the first Bentley in decades deserving of the famous name" in their review of the car on its introduction to the United States in 1989.

The suspension changes, though seemingly subtle, transformed the soft and less than well-controlled ride of the Mulsanne Turbo into that of a real performer Development on improving handling had already begun when Mike Dunn was appointed engineering director in Crewe in February 1983, but instead of the proposed 10% increase in roll stiffness, he demanded 50%. This goal was met by upping the anti-roll bar rates by 100% in front and 60% in the rear, and by increasing the damping. A Panhard rod to anchor the rear suspension was also introduced, reducing side-to-side movement in corners Spring rates remained the same as on the Mulsanne.

The Turbo R was sold alongside the Mulsanne Turbo for a brief moment, but the Mulsanne was taken out of production in 1985. In October 1986, for the 1987 model year, the Turbo R received anti-lock brakes and new Bosch MK-Motronic fuel injection to replace the Solex carburetors. Other modifications carried out at the same time included new, slimmer sports seats and a higher rear axle ratio. In mid-1988 (MY 1989) changes to the appearance were made, introducing twin round headlamps and a bigger front spoiler. Around the turn of the year between 1991 and 1992, GM's 4L80-E four-speed automatic transmission replaced the long running three-speed Turbo Hydramatic 400 throughout the Bentley/Rolls-royce lineup, including the Turbo R.

A "New" Turbo R model was introduced in 1995. Changes included Zytek fuel injection and appearance modifications. There was also a special version for the German market, the "Turbo R Sport", which featured the Continental T's sporty alloys and carbon-fibre rather than walnut panels inside.

In 1995, the Bentley Turbo S was announced as a strictly limited model, with envisaged production as less than 100 units. Effectively a stop-gap model before the introduction of the Bentley Arnage, just 60 units were produced, distributed across selected European, Middle Eastern and Asian markets and customers only. The engine termed a Blackpool version used Bosch Motronic fuel injection and digital ignition derived from Formula 1 technology, and with a larger exhaust driven Garrett AirResearch turbocharger with intercooler, output 385 hp (287 kW). The same engine was fitted to 12 Bentley Continental S, and 3 to special build Rolls-Royce Silver Spirit S. The car was fitted with a viscous differential, and with both new 255/55WR17 tyres and traction control fitted, permitted a top speed of 155 miles per hour (249 km/h).

In 1996 production of the short wheelbase Turbo R ended, leaving only the model hitherto sold as the Turbo RL - now known simply as the Turbo R. For 1998, the Turbo R was replaced by the sportier yet Turbo RT. 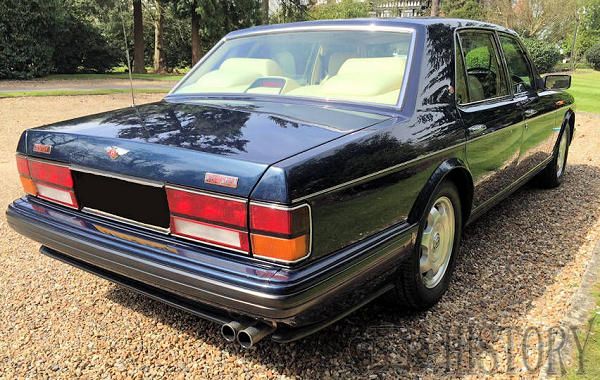