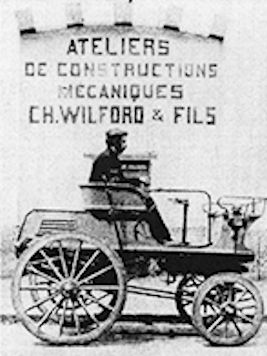 Charles Wilford founded the company in 1896 and began building cars in 1897.

The first model was inspired by German Benz . It had a single-cylinder engine in the rear and the body shape vis-à-vis .

1899 followed the model 6 CV with two-cylinderfront engine as dos-à-dos .

In 1900 followed the models Dog-cart, whose two-cylinder engine made 7  hp , and a small three-seat Voiturette whose engine only made 3 hp.

Later in 1919 began the import of vehicles from Willys-Overland and 1936 the assembly of these vehicles.In 1956, Wilford produced the Trippel 750 under license .