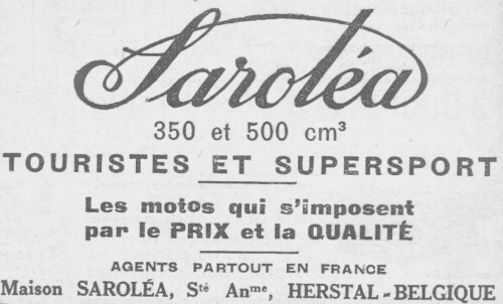 Saroléa was a Belgian company that produced weapons in Herstal since 1850 . From 1892 there were also bicycles , from 1896 for a short time motor tricycles and small cars and built from 1903 to 1960 motorcycles.

AT first . The engines developed by Saroléa were even exported to England and sold there under the name Kerry . Many parts of the bikes came from English manufacturers such as Sturmey-Archer.

Joseph SAROLEA also began, at the end of the nineteenth century, with the construction of a few light cars to around 1903.

Saroléa motorcycles were built in the sporty style of classic English motorcycles. In the 1930s , there was a factory team equipped with OHC machines. . From the mid- 1950s onwards, in view of the declining motorcycle market, it worked closely with the Belgian competition and, in addition to the classic four-stroke models until 1960, also produced various models with two-stroke engines, partly with own, partly with bought Sachs engines.

Due to the sharp decline in motorcycle sales in the late 1950s, the brand Saroléa disappeared in 1960 from the market.