Automotive manufacturer of Gent;Belgium From 1951 to 1952. 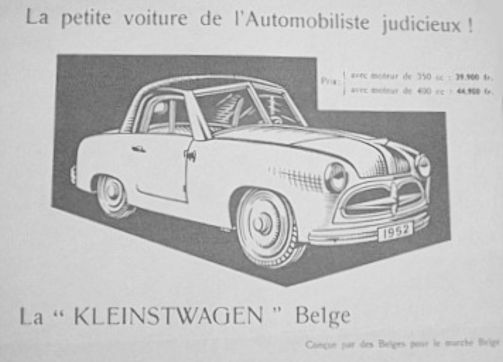 Établissements De Reuck was a Belgian manufacturer of automobiles . The brand name was Kleingwagen Belge.

The company from Ghent manufactured from August 1951 the Kleinschnittger F 125 under license. In addition, the licensor has ordered the design of a coupe . When Paul Kleinschnittger personally brought the coupe to Gent, he found that the production of open two-seaters was inadequate. So it came to a dispute between the business partners, and the license agreement was dissolved. At the Brussels Motor Show in January 1952, the company then exhibited on the basis of the coupe vehicles and began production, which ended in the same year.

The vehicles were a variant of the Kleinschnittger. The two-seater was driven with an aluminum body, which it both open and as a coupe was, either from an ILO - two-stroke engine with 175 cc displacement , an air-cooled two-cylinder engine with 348 cc or a water-cooled two-cylinder engine with 400 cc displacement. The selling price was 39,900 Belgian francs for the coupe with 348 cc and 44,900 Belgian francs for the coupe with the larger engine.