Automotive manufacturer of Elsene; Belgium From 1937 to 1939. 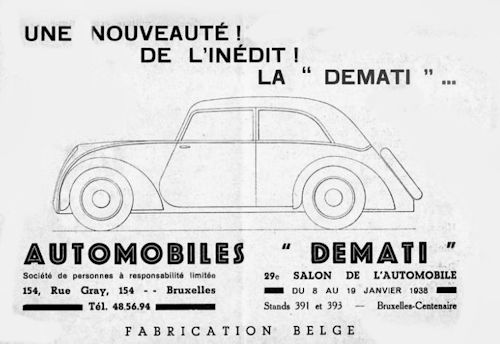 Defay, Matthys et Timberman was a Belgian manufacturer of automobiles in the 1930s.The brand name was Demati .

Eugène Matthys, who had been producing lightweight automobile bodies since the 1920s, founded the company in 1937 in Ixelles / Elsene together with Defay and Timberman and began developing and producing automobiles. Due to the second world war in 1939 the production ended.

The first prototype a convertible , four-seater had a V2 engine by JAP cc with 600 or 980 cc engine capacity , front-wheel drive and rear wheel steering. The vehicles had a special tubular frame, which was connected to the body. Later models had a four-cylinder engine of Ruby cc with 950 or 1,100 cc displacement and normal front-wheel steering. The body had two doors.