Green Goddess is the popular name for the Bedford RLHZ Self Propelled Pump , a fire truck originally used by the Auxiliary Fire Service (AFS) and later by the British Army.They purchased a number of the 4-wheel 'drive version, which were painted red and known as the Bedford RLHZ. . These olive green painted vehicles were built from 1953 to 1956 by Bedfordfor the AFS. Their construction was based on the army truck Bedford RL .

The Auxiliary Fire Service was established as part of Britain's civil defense after World War II and was to be used in events such as a possible atomic bombing of the Soviet Union to rescue the civilian population. It was thought at the time that a nuclear attack on Great Britain would cause a large number of fires that would overwhelm the local fire brigades . So they ordered a large number of normal fire trucks for reserve units. The AFS regularly used these vehicles until its dissolution in 1968 by the government of Harold Wilson .Exclusively on Bedford chassis by several coach building companysby the Home Office for use by A.F.S. personnel in emergencies.
Each carried the inscription "This vehicle is the property of the Home Office". 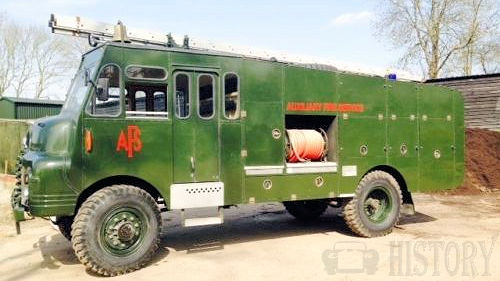 The Green Goddess cars were actually not normal fire trucks (the AFS called them "gadgets"), but "self-propelled pumps," some with rear-wheel drive, others four-wheel drive. Their main task was to pump large volumes of water from lakes, rivers, canals and other sources into cities hit by a nuclear strike. The vehicles could also be used as relay stations for pumping water over many kilometers, whereby they would have been used at regular intervals to increase the pressure. The fight against fire would have been a possible secondary role.

Until its dissolution, the AFS used the "Green Goddess" intensively to support local fire departments across the country. They ensured the water supply and also served as firefighting vehicles when the fire brigades deployed were already busy in major fires. Their ability to handle large volumes of water over longer distances has been invaluable, especially in remote areas, or even when local sources of fire are insufficient. In most cities in the UK, the AFS neighborhood was right next to the regular professional fire brigade .

In 1968, the vehicles were mothballed but occasionally used by British forces to provide fire safety during firefighter strikes (especially in 1977 and 2002/2003). They were also used to pump out water during flooding. They were given regular care and kept them fit for public transport.

Meanwhile, the Green Goddess vehicles are no longer needed. A law enacted in 2004 allows the government to order the use of civilian fire and rescue vehicles in national disasters. New civil protection units were formed after the terrorist attacks of 11 September 2001, the u. a. have the possibility of transporting large amounts of water over long distances. , In March 2004, the government announced that it would conduct a trial sale of 40 of its remaining over 900 Green Goddess and also sell off the rest. Meanwhile, the sale is completed. Most vehicles went to fire departments in developing countries, mainly in Africa.

Unlike modern fire trucks, the Green Goddess have no radios, no cutters, and just a single ladder. Two-wheel drive models carried 400 gallons (1,818 litres) of water; 4-wheel 300 gallons (1,362 litres). They were relatively slow with a top speed of 105 km / h and a steady speed of 72 km / h and had no power steering. One benefit that many Green Goddess have over more modern vehicles is four-wheel drive. The fuel consumption is between 28 and 35 liters / 100 km, depending on driving style and load. They also have a lower charge capacity for water (1,400 l for four-wheel drive and 1,800 l for rear-wheel drive) and the road is poor because of the lack of anti-slosh. The cab is made of wood and provides little protection in accidents.

Some vehicles were later equipped with blue warning lights and two-tone horns, as well as modified taillights, to accommodate the other fire engines. The mechanics are robust and easy to maintain. 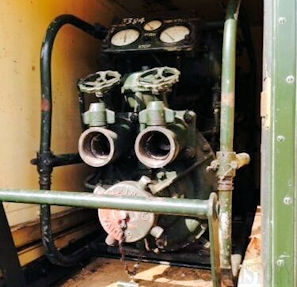 The Green Goddess had a number of standard features, such as hoses with manifolds in different sizes for different water flow rates to light, portable pumps and ceiling fixtures. All vehicles had a 10 m ladder and at least one telescopic ladder. Some specimens were equipped with additional equipment such as hook ladders , radios , large bolt cutters, etc.All models fitted single Stage Centrifugal Sigmund FN 4 or 5 900 g.p.m, rear mounæd pump 51,'2in. suction inlet, 4 standard delivery valves. also 6in. flange for relay pumping, 1,600ft. of 23kin. delivery hose. 180ft. hose reel each side, light portable pump and one 35ft. aluminium alloy extension ladder.

The main pump had a capacity of 4,500 l / min. (4,100 l / min in the four-wheel version). Normal fire hoses could be connected either to the four-port main pump or to standard hydrants , for which a number of fittings were carried. In addition, the devices had a small Coventry Climax- Pump, the 1,600 l / min. delivered and had its own gasoline engine as a drive. This could also draw water from a river or other source and also feed in normal fire hoses, so this unit offered a separate fire fighting capability. A water tank of 1,800 liters (1,250 liters in the four-wheel version) was also installed, the contents of which were fed into small fire hoses on the left and right sides of the vehicle so that the possibility of immediate fire fighting immediately after the arrival of the vehicle while the large hoses were installed. There was also a circulation pump and other useful tools and equipment on the car.

The vehicles were usually staffed with an officer on duty seated in the passenger seat, a driver / pump operator and four firefighters in the back seats. 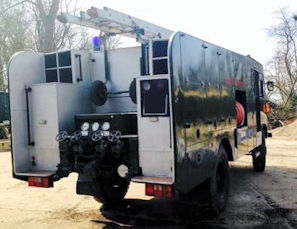