Bean Cars were made in factories in Dudley, Worcestershire, and Coseley, Staffordshire, England, between 1919 and 1929. For a few years in the early 1920s Bean outsold Austin and Morris although their success was not sustainable.

The Bean Motor Company grew out of the ironfounders A. Harper & Sons which was founded in Dudley by Absolom Harper in 1822. George Bean married Absolom's granddaughter and in 1901 became principal shareholder of A. Harper & Sons. In 1907 George became chairman of the company and the name was changed to A. Harper & Sons & Bean.

The company had been a supplier of car parts and in 1911 the company installed drop hammers to increase production and in 1912 the company opened a new forging plant in Smethwick. During this period George Bean served as mayor of Dudley in 1908, 1911 and 1912.

Bean prospered during the war due to military contracts for the supply of munitions to the government. The companies factories were expanded in order increase production of shrapnel and shell cases. By 1916 Bean was producing around 21,000 shells a week. After the war George Bean received a knighthood for his services during the war and his son Jack was given a CBE.

After the end of the war something was needed to replace the gap left by the end of military contracts so Bean decided to enter the increasingly active car market by becoming a car manufacturer. The manufacturing rights for the Perry car were up for sale so A. Harper & Sons & Bean purchased them for £15,000 in 1919, giving them a quick entry into the car market. The first Bean was a resurrection of the pre-World War I Perry car, which had been taken over by A. Harper, Sons & Bean Ltd. Rated at 11.9 RAC horsepower, the 1795cc 4-cylinder engine was linked to a separate 3-speed gearbox. The car in chassis form initially cost £400, but this was reduced to £245. A four-seat open body was £80. Production was divided between two plants, the one in Dudley producing bodies, and Coseley being responsible for assembly. Production of the model peaked at 80 a week in 1922; about 10,000 were made in total. 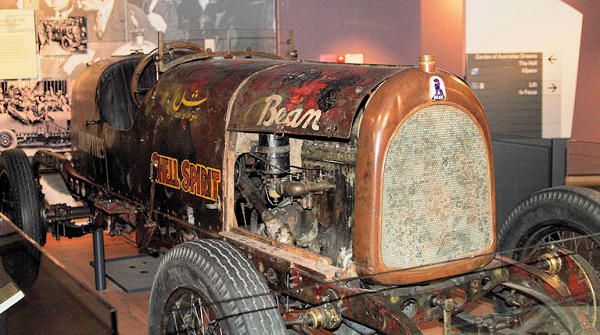 Jack Bean was managing director of the company and he visited America in order to purchase the latest machinery for car production. This led to Bean becoming one of the first companies in the U.K. to adopt twin moving track assembly lines. Jack also wanted to form a consortium of manufacturers along the lines of the General Motors model. He succeeded in bringing together a group of companies including the vehicle manufacturers Swift and Vulcan, the Hadfield steel company, the Regent Carriage company and together they formed Harper Bean limited in November 1919.

The new company wanted to emulate the success of the Ford Model T and unveiled their first car at the 1919 Motor Show. Their initial models were two and four seater tourers and coupes which sold for £425 upwards. By early 1920 the company was producing 80 chassis a week although Bean's Dudley plant could not produce enough bodies so an order was placed with Handley Page of Cricklewood. In 1920 2,000 Bean cars were produced.

However things did not go as well as hoped as prices soared due to wage rises and the fact that the car industry had now entered recession. These circumstances saw the Harper Bean conglomerate disband and the company enter recession owing £475,000 to its suppliers. Production ended in October 1920 and Jack Bean resigned from the company a month later.

The company was saved in November 1921 by a huge investment of capital by Sir George Bean, Barclays Bank, the National Provincial Bank and Hadfields' Steel which allowed them to purchase a controlling interest in Harper Bean and pay off the creditors. Production restarted in early 1922 and the company was producing 100 cars a week by August.

In October 1923 the company launched a new car, the Bean 14, a much-improved model with a 2.3-litre engine in unit with a four-speed gearbox. About 4000 of all the variants were made up to 1929. The car sold well, particularly in Australia where Francis Birtles drove a Bean 14 from Sydney to Darwin and back. In 1924 the company released a smaller Bean 12 and also began to produce commercial vehicles. Sir George Bean died in 1924 at the age of 68 and was replaced as chairman by Major Augustus Clerke who had previously been managing director at Hadfields.

Bean was still suffering a large shortage of cash with debts of £1.8 million mainly as a result of the restructuring that had taken place in 1921. The company was rescued by steel supplier Hadfields Limited from Sheffield and a new model, the 18/50, was introduced with a 2.7-litre six-cylinder Meadows overhead valve engine. Under Hadfields the same models were produced although were changes in management with Jack Bean departing the company to join fellow Wolverhampton manufacturer Guy Motors. However, this car was to only last a year, during which time 500 were made. In chassis form it cost £365. Some Bean factories were sold with production concentrated at their Tipton site From 1927 all cars were known as Hadfield Beans, and the 14 was updated to become the 2300 cc 14/40. This used the Bean engine again.

In 1924, partly in recognition of the economic need to maintain production volumes, a small one ton truck was added to the range, and from then until 1931 Bean also manufactured commercial vehicles, concentrating on the lighter end of the market. The original truck was essentially an adapted passenger, car, but in 1927 an unashamedly commercial truck was launched, now with a payload capacity of 30cwt (1500 kg).Unfortunately for Bean, Morris entered the UK light truck sector at the same time: intense competition in the sector largely drove out the only other competitors in the UK market (mostly imports originating in the USA): Bean's own finances also suffered, despite ongoing funding from Hadfield Steel, and the company's foray into commercial vehicle production ended in 1931 as Bean reverted to their former role as a components supplier.

In 1927 a number of changes were made to the existing product range. Production of the Bean 12 ended with around 3,000 built in total. The Bean 14 became the Long 14, and the Short 14 was introduced. This consisted of a Bean 12 chassis, powered by a 14 engine. The Long 14 had a relatively short life and was discontinued in 1928.

However the release the following year of the Hadfield Bean 14/45 was severely damaging to the companies reputation. The car was not properly tested and was released with a number of serious faults. This led to a serious drop in sales and car production was ended in 1929. In 1931 the company entered voluntary liquidation and vehicle production was ended.

Hadfields relaunched Bean in 1933 as Beans Industries to provide castings for the motor industry. The company became profitable again and in 1937 Beans Industries became a public company. During World War Two the company produced lorry engines and truck parts. Bean was taken over by Standard-Triumph in 1956 and in 1960 became a part of British Leyland. This carried on until Leyland was broken up by the conservative government in 1988 and Bean was bought by its management team who also acquired Reliant. Reliant failed in 1995 and forced Bean into receivership. The Tipton factory was acquired by German company Eisenwerk Bruhl who later became Ferrotech. Ferrotech was a major supplier for Rover, however when Rover entered administration in 2005 Ferrotech could not find a replacement contract and were forced to close the factory in August 2005.

Australian expeditionary Francis Birtles made a number of epic and record breaking journeys in Bean Cars, including being the first person to drive from England to Australia in 1927.

The Coseley factory was also responsible for making Captain George Eyston's world-land-speed-record car Thunderbolt, which took the record in 1937.

The Dudley factory is still in existence as part of an unconnected private business. The Coseley site remained in the automotive business as a parts supplier until being forced to close due to financial problems in 2005, and was demolished three years later. However, the newer phase of the factory that was built during Bean's years as an industry supplier was sold off and demolished in 2003/04, and the land (actually located over the border in Tipton) was occupied by new houses within a few months. One of the streets on this new estate, Thunderbolt Way, takes its name from a former Bean product. A large collection of Bean cars is to be seen at the Bredgar and Wormshill Light Railway.

On moving to the Coseley site, Bean built a block of offices on Sedgley Road West on the Tipton side of the border with Coseley. However, these were purchased by Tipton council who opened them as their municipal offices on 7 March 1935, a use which lasted for the next 31 years until Tipton council was abolished and the bulk of the town was placed under control of West Bromwich council. The building was then used by Dudley College until 1993 and has since been used by a number of different ventures.

The address Bean Road (Dudley DY2) has long existed for a residential street within 200 yards (180 m) of the Dudley factory, while Bean Road (Coseley) provides an access to the former Coseley factory site, and the nearby Bean Drive is a cul-de-sac off Thunderbolt Way in Tipton. 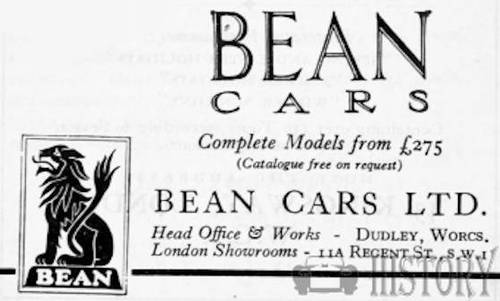