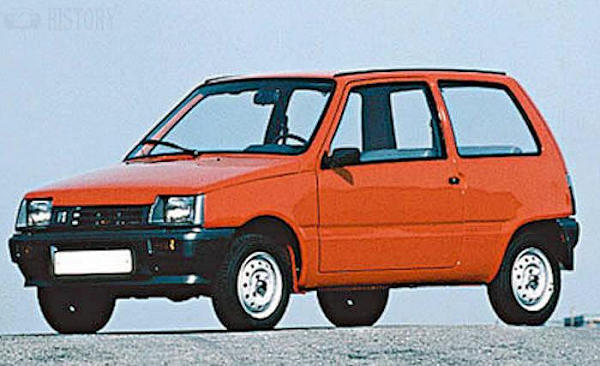 VAZ-1111 Oka (Russian: Ока ВАЗ, "Eye" (СеАЗ, КамАЗ)-1111) is a city car designed in Russia in 1988 by AvtoVAZ featuring a 750 cc (46 cu in) SOHC two-cylinder engine. The car was developed by AutoVAZ, by a team led by Yuri Kuteev, but it never entered volume production there. All production was sourced to SeAZ factory in Serpukhov and ZMA in Naberezhnye Chelny (formerly owned by Kamaz and now owned by SeverstalAvto). There were plans to start production at the new plant in Yelabuga which never materialized. The car is also produced in Azerbaijan by the Gyandzha Auto Plant. The name comes from the Oka River in Russia upon which Serpukhov is situated.

This extremely cheap, lightweight and simple car replaced the ZAZ Zaporozhets, which had been developed in 1975 as the "people's car" and served its purpose for almost ten years as a low-end transportation. There was only one Soviet car more basic, and that was a special vehicle for disabled people, the SZD. Initially, when Serpukhov factory engineers, under factory manager Alexander Popov (who told Minavtoprom (the automotive ministry) SeAZ needed a new product) came up with the project for Oka, they turned to their VAZ colleagues for aid. The project was approved in 1983.

The tiny car was to be a replacement for the SZD and featured a simple motorcycle engine. Andrei Rozov, one of the lead VAZ engineers, designed a new engine from scratch, but then decision was made to implement the "chopped in half" VAZ 2108 four-cylinder engine instead. It was 1983, and the first Soviet front-wheel drive automobile, the 2108, was ready to hit the market; so the Oka initiative quickly became the next "people's car" project, the one that "every factory engineer can afford".

The inspiration for Yuri Vereschagin, VAZ exterior designer that created Oka, came from Japanese Daihatsu Cuore. Tightly restricted by project specifications, he did his work hardly believing that the car is going to make it to serial production.

Nevertheless, its comparatively satisfactory technical characteristics and low price (as of now, it sells for about $3500) allowed it to lead a prolific career in the turbulent years to come.

At the 1989 Moscow International Motor Show, VAZ exhibited a battery-electric version known as the VAZ-111E. The car was produced on a direct order basis until 1998. The 120V worth of batteries were stored in the engine bay, beneath the seats and in the cargo bay, giving the car a range of approximately 100km.

Series production of the OKA was stopped in Russia in 2008 when SeAZ released the last batch of OKA's with Chinese EURO-2 engines. 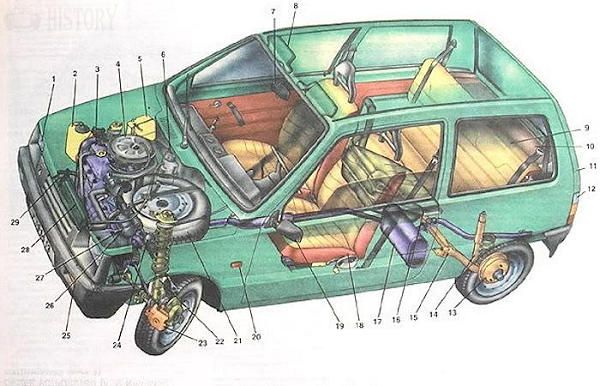 Its road agility and acceleration rate (quite surprising for its appeal) prevented it from taking Zaporozhets' place in folklore (which takes its delight in the awkwardness and slow speed of the former).

Its small size and weight (635 kilograms), however, gives birth to a multitude of funny (and often true) stories involving several men carrying Oka away from its parking place.

Special modifications for disabled people (missing one or both legs or one arm) were being distributed for free via social care system in Russia.

Like its brethren VW Beetle, it often attracts the sentiment of the owner, so various customized and tuned versions are inevitably exhibited at local exotic cars festivals.

There is a restyling scheduled by the manufacturing company for 2007; it will not affect anything besides the bodyworks, lights, interior design and features. Reportedly, there are no positive prospects for Oka-2 and Oka-3, Lada's concept city cars in development for years.

As of 2014, an American company called Oka Auto USA, based in Las Vegas, Nevada, offers electrically powered Okas for the US neighborhood electric vehicle (NEV) market called the Oka NEV ZEV. To conform to NEV regulations, the electric Oka's speed is limited to 25 mph 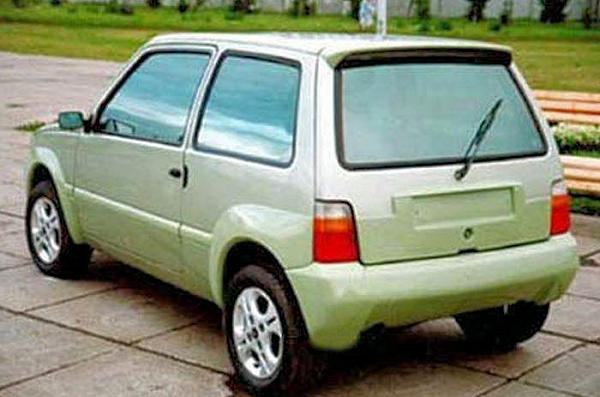