The VAZ-2105, VAZ-2104 and VAZ-2107 (collectively known as the Lada Riva in the United Kingdom and the Lada Nova in much of continental Europe) are a series of medium-sized family cars built by Russian car manufacturer AvtoVAZ, introduced in 1980 in the Soviet Union, and progressively in other European markets through the late of the 1970s and sold in both saloon and estate versions. AvtoVaZ cars are currently branded as Ladas.

Today they are generally referred to as the Lada Classic series, being derived from the original Fiat 124 platform which has been the now-iconic mainstay of the AvtoVAZ lineup since the company's foundation in the late 1960s. The production in Russia ended between 2010 and 2012, however, the Lada 2107 remains in production in Egypt.

Although introduced in late 1978 the Riva's origins are older: it is a restyled version of the original Lada type VAZ-2101 "Zhiguli" saloon, which was introduced in 1970. The Riva itself is officially designated – and known in the home market – as VAZ-2105 (base saloon), VAZ-2104 (estate), and VAZ-2107 (deluxe saloon identified by the large chromed grille). Other names sometimes used include Pyatyorka ("the five"), Chetvyorka ("the four") and Semyorka ("the seven"). In Russia, VAZ-2105, VAZ-2104 and VAZ-2107 are considered to be different cars rather than variants but nonetheless all of them are part of a single "Klassika" ("Classic") family along with older models such as the VAZ-2101.

Mechanically, the car is virtually identical to the first-generation VAZ-2101 model, featuring the Fiat-derived manual transmissions, coil spring suspension all round and aluminum drum brakes on the rear wheels. The smaller-engined variant, the 1300 cc version (VAZ-2105) had a major four-cylinder engine revamp compared to the original VAZ-2101 (Lada 1200). The old OHC-engine had its valves actuated by chain, while the new one was modified to having a toothed belt-drive. Nonetheless, the Riva's larger-engined version (VAZ-2107) carried on with the old 1500 cc, chain-driven OHC engine coming over from the original Lada 1500 (VAZ-2103) of 1973. Another change was made to the engine in 1992, when single point fuel injection and catalytic converters were specified in an attempt to keep up with emissions legislation.

Tightening safety and emissions legislation led to the Riva being withdrawn from most Western European markets by 1997, although it remained in production at the AvtoVAZ factory in the Russian Federation and was sold as the Lada Classic. In 2002, production of the estate model was taken over by Izh, before assembly was also started at the Bogdan Group's LuAZ plant, and later in Cherkasy. The 2107 model has been in production, not only at AutoVAZ but also at the ZAZ factory in Ukraine, and at Suzuki's factory in Egypt. In August 2011, Russian production of both the 2105 and 2107 have been completely moved to Izh.

In the UK, its spartan interiors, dated styling and outdated mechanics meant that it was never actually aimed at buyers of market leaders' similar-sized products, such as the Ford Sierra, Vauxhall Cavalier and Austin Montego. The Riva was still selling well in the United Kingdom and many other western markets in the early 1990s, but the next few years saw a raft of new models come from budget competitors such as Daewoo, Hyundai, Kia and Proton, pushing Lada sales into terminal decline. This, combined with the much-needed investment to adapt cars to stricter European Union emissions requirements not being available, resulted in the decision to withdraw Lada from the UK (and some other European Markets) and Canada on 4 July 1997.

The car was also sold in New Zealand, where it was distributed by the New Zealand Dairy Board. The Dairy Board received the cars in lieu of cash payments for deliveries of mutton and butter to the Soviet Union. The last such trade was carried out in 1990.

In Egypt, the Amal Foreign Trade Company and Lada's parent company AvtoVAZ signed a joint venture agreement to assemble Ladas for the North African market in 2000. However, as they did not have their own factory, space was found at a local Suzuki plant in Cairo to assemble the 2107 version of the Riva. As of 2006, production continued at Suzuki with an additional model, the 2110, being produced. Plans are under-way for a separate factory to open in Egypt later this year for Lada production.

In the 2010s, the sales of the Lada Classics remained strong in the car's native Russia and some of the former Eastern Bloc nations. In April 2011, it was reported that Russian sales of the 2105 and 2107 series showed an increase of 140% on a total of 28,633 in the first quarter of the year. However, production of the 2105 ceased at AvtoVAZ's Togliatti plant at the end of 2010 after a 30-year production run and nearly 3,000,000 units, with production of the other variants being fully subcontracted to the IzhAvto plant near Izhevsk in a strategic alliance with AvtoVAZ.

The 2107 made the transition to the IzhAvto plant in August 2011, rumoured to be in preparation for the launch of the Lada 2116 thus marking the end of production of the original Fiat 124 derived models at Tolyatti after a 41-year production run and over 14 million units.

In September 2012, the history of the sedan model in Russia was over, when the last 2104 came off the IzhAvto assembly lines The last unit of the Lada Classic series, a 2104 model, was produced by IzhAvto on 17 September 2012.Starting from the same month, production at the Izhevsk factory will be replaced with the new Lada Granta. However, 2107 model is still in production in Egypt. 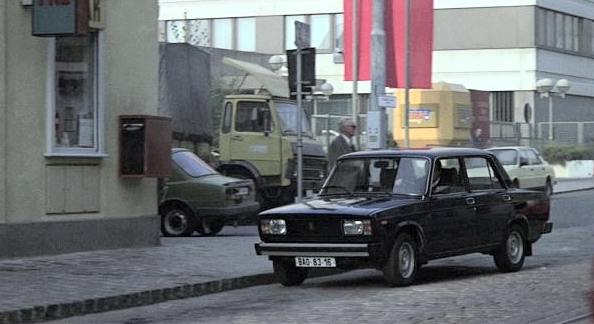