The VAZ-2103 is a deluxe compact sedan car (small class, passenger car, model 3 in Soviet classification), produced by AvtoVAZ and introduced in 1972. Better known as the Lada outside of its native Russia, it was a localized version of the Fiat 124 Special model 1968 tailored for the Soviet and Eastern European market. VAZ-2103 model differs from the VAZ-2101 exterior, with four headlights, moldings on the sides of the body and large rear lights. Its main difference - the more powerful engine 1.5L (75 hp). In addition, this model is distinguished by the presence of vacuum brake booster and automatic adjustment of the gap between the rear brake pads and drum, "sport" instrument panel with tachometer.

Known as the Zhiguli within the Soviet Union, the main differences between the VAZ-2103 and the Fiat 124 are the use of thicker gauge steel for the bodyshell, an overhead camshaft engine (in place of the original Fiat OHV unit), and the use of aluminium drum brakes on the rear wheels in place of disc brakes. Early versions of the car featured a starting handle for cranking the engine manually should the battery go flat in Siberian winter conditions, and an auxiliary fuel pump.

AvtoVAZ were forbidden from selling the car in competing markets alongside Fiat 124; however exports to Western European nations began in 1974 when the 124 was discontinued in favour of Fiat's newer 131 Mirafiori model. The VAZ-2103 was sold in export markets as the Lada 1500 from mid-1970s to early 1980. In the United Kingdom, it was sold as the from May 1976 until May 1979 and it was the second Lada car to be sold in this market. 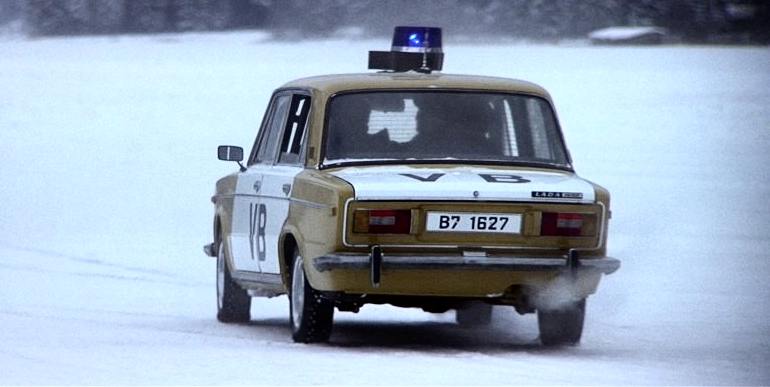 The Living Daylights VAZ-2106 Czechoslovakian Police Several are engaged in pursuit and are destroyed at the hands of Bond's Aston Martin, the first is cut in half by the Aston's laser tyre shredder, the second is sunk into a frozen lake after the Aston cuts a hole in the ice, whilst another plummets from a ramp and goes through a shed.