The VAZ-2101 is a compact sedan car (small class, passenger car, model 1 in Soviet classification) produced by AvtoVAZ and introduced in 1970. The estate version was known as the VAZ-2102. VAZ had been founded in the mid-1960s as a collaboration between Fiat and the Soviet government, and the 2101 was its first product. Better known as the Lada outside the former Soviet Union, the 2101 is a re-engineered version of the Fiat 124 tailored for the nations of the Eastern Bloc, but was widely exported to the West as a budget "no-frills" car. Although the facelifted VAZ-2105, 2104 & 2107 versions largely replaced it in the West in the early 1980s, it was still produced for the domestic market as late as 1988.

Known as the Zhiguli within the Soviet Union, the main differences between the VAZ-2101 and the Fiat 124 are the use of thicker gauge steel for the bodyshell, an overhead camshaft engine (in place of the original Fiat OHV unit), and the use of aluminium drum brakes on the rear wheels in place of disc brakes. Early versions of the car featured a starting handle for cranking the engine manually should the battery go flat in Siberian winter conditions, and an auxiliary fuel pump.

AvtoVAZ were forbidden from selling the car in competing markets alongside Fiat 124; however, exports to Western European nations began in 1974 when the 124 was discontinued in favour of Fiat's newer 131 Mirafiori model. The 2101 was sold in export markets as the Lada 1200, Lada 1300 and Lada 1200S until 1989; it was sold in the United Kingdom from May 1974, until the arrival of the Riva in 1983. It was the first Lada to be sold in the United Kingdom. 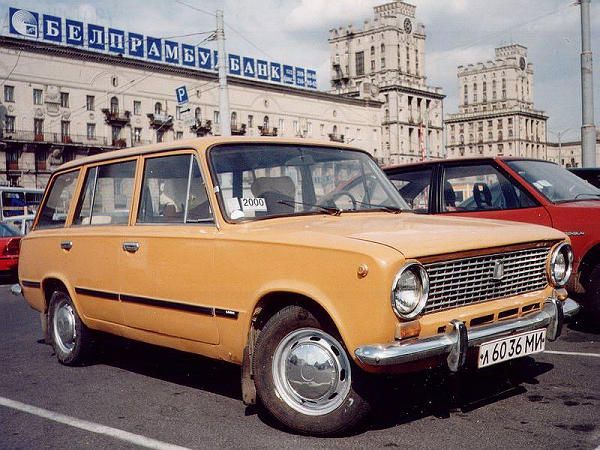