The Autobianchi Primula is a supermini economy car manufactured between 1964 and 1970 by the Italianautomaker Autobianchi, a now defunct subsidiary of the Fiat Group. The Primula was Fiat's first model with rack and pinion steering and is widely known for its innovative Dante Giacosa-designed front-wheel drive, transverse engine layout — that would be later popularized by the Fiat 128 to ultimately become an industry-standard front drive layout.

The Primula was originally available with two or four doors, with or without a rear hatchback, referred to in Italian as "berlina". Beginning in 1965, Autobianchi offered a coupé model, a more stylish and spacious 2-door fastback designed by Carrozzeria Touring.

Primula models were manufactured in the Autobianchi factory in Desio and were priced comparably to the Austin/Morris 1100 models built in Italy by Innocenti.

Before the Primula, all Fiat Group passenger cars were rear-wheel drive; the larger models followed the classic FR layout (front engine powering the rear axle), and small cars were rear-engined. Meanwhile, a practical concept emerged, namely the front-wheel drive layout with the engine mounted transversely, which allowed for very efficient space utilization. First popularized by the Mini, it also found its way to other, bigger models, starting with BMC's Austin/Morris 1100.

Fiat's chief designer, Dante Giacosa, recognized the potential of the concept, but the company decided to experiment without risking damage to the image of its popular Fiat-branded cars. Thus the Autobianchi Primula emerged—a car marketed under a less crucial nameplate, for which it was an entry into a whole new class of vehicles. 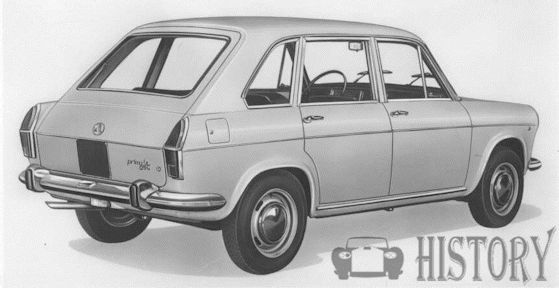 Initially, the Primula was fitted with the 1221 cc engine from the Fiat 1100 D (for the coupé it was uprated to 65 hp (48 kW)), but in 1968 it was replaced with Fiat 124 engines—the berlinas received the 1197 cc 60 hp (45 kW) engine from the standard versions, while the coupé was fitted with the more powerful 1438 cc 70 hp (52 kW) unit. All engines used in the Primula had overhead valves (OHV)—the later twin cam derivative of the 1438 cc unit was not used in any Autobianchi (Fiat did use it later in the Lancia Beta- the issue at the time in a transverse installation of a twin-cam head being the arrangement of the exhaust manifold of the necessarily cross-flow head). Unlike contemporaneous BMC and Peugeot models, which had the transmission in the oil sump, the Primula had its manual transmission placed end-on, above the differential. The Primula also featured disc brakes on all four wheels, uncommon in small cars of the time. 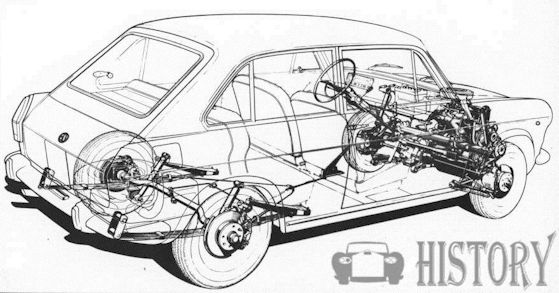 The Primula's particular configuration of front wheel drive and transverse engine, but with a gearbox on the end of the engine, ingenious Fiat-designed clutch release mechanism and unequal length drive shafts, rather than a gearbox in the sump like the Mini, has become universal among front-wheel-drive cars, as did its use of conventional steel suspension in almost all other cars except Citroens: usually McPherson struts at the front and a "dead" rear axle. The Primula is thus a car design of far greater significance than is often realised, as its design influence spread, far beyond even the mainstream high volume Fiats such as the 127 and the 128 of the late 1960s which used its driveline layout; to every front wheel drive transverse engined car in production today.

The Primula was favorably received in the marketplace, and came second in the 1965 European Car of the Year contest, after another front-wheel drive car, the Austin 1800. This convinced Fiat to develop the drive concept further. In 1969 the first Fiat with a front-mounted transverse engine, the Fiat 128, was launched, along with two new front-wheel drive Autobianchis: the Autobianchi A112, smaller than the Primula, and the larger Autobianchi A111. The 128 secured Fiat the Car of the Year title in 1970, with A112 coming second. Primula production ceased in 1970, by which time 74,858 had been built. 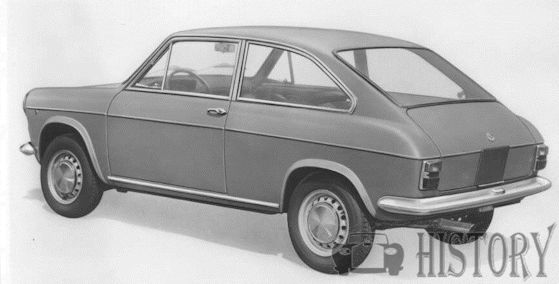