The A112 Abarth, introduced in September 1971 at the same time as the Elegant. It was prepared by the motorsports division of the Fiat Group, at first with a 982 cc engine, obtained by increasing the stroke, coupled to a sportive exhaust, a twin carburetor, and a different camshaft. In 1975, displacement was increased to 1,050 cc, while power climbed from 58 HP to 70 HP at 6600 rpm, for a weight of only 700 kg (1,540 lb).

The two engines were offered in parallel until production of the smaller unit ended in late 1976. The 1975 model was also the first A112 to use a 5-speed manual gearbox. These changes turned the A112 into a nervous machine, much admired by young performance enthusiasts. 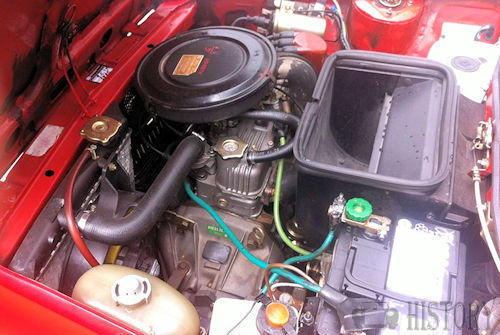 The car was entered in various rallying events throughout Europe and even spawned a one-make trophy: the Campionato A112 Abarth spanned eight editions, from 1977 to 1984, and adopted contemporary Group 1 rules, which meant nearly-stock cars. Some famous Italian rally drivers, including Attilio Bettega, Fabrizio Tabaton and Gianfranco Cunico, were among the winners of the championship. The increasing popularity of the A112 in historic rallies and hillclimbs led to the reintroduction of a one-make trophy, called Trofeo A112 Abarth, in 2010. Abarths have often led hard lives, having been preferred by young owners with aggressive driving styles. Formula One driver Olivier Panis is one of many to have crashed an A112 Abarth.

In September 1971 . A performance edition "Abarth" was introduced

In March 1973 the A112 received a makeover. The grille was new, with a larger mesh, and the bumpers were now of rubber with chrome insert  The Abarth received a new chess pattern upholstery.

In 1975 the third series arrived. redesigned taillights - with integrated reversing lights on the Elegant and Abarth. The Abarth also received a new larger 1050 cc engine ("70HP"), . All engines were still pushrod units, derived from the old tipo 100 engine first introduced in the Fiat 600. In 1976. This was the last model to have the diamond shaped turn signals on the front fenders, with later models receiving more orthodox rectangular ones.

In November 1977  The most obvious difference is a slightly taller roof, with a marked edge around the sides. This improved interior habitability considerably.

In July 1979 the car underwent another styling modification, receiving large black plastic cladding on the rear, surrounding new taillights, and new side trim and bumpers. The grille was also new, and there was black plastic wheelarches to link all of the plastic parts together. The extractor vents behind the rear side windows were also larger, of black plastic, and wrapped around the pillar.  The Abarth also received the new five-speed gearbox, as well as new alloy wheels and foglights as standard. The fifth gear was an overgear, while the ratios of the four lower speeds and the final gearing remained unchanged. The front turn signals were moved from the front of the fenders to a spot just in front of the leading edge of the doors, while a small badge denoting the trim level appeared in the turn signal's old place

A lot of the plastic excesses of the fifth series were reversed for the sixth series, which was introduced in the autumn of 1982. New smoother bumpers, removal of the wheelarch trim, and a less heavy grille treatment brought back some of the original elegance of the A112, while the interior was also completely renovated. The sixth series also received new body-colored vents on the C-pillar, and the front corner lights were incorporated into the top of the bumper. 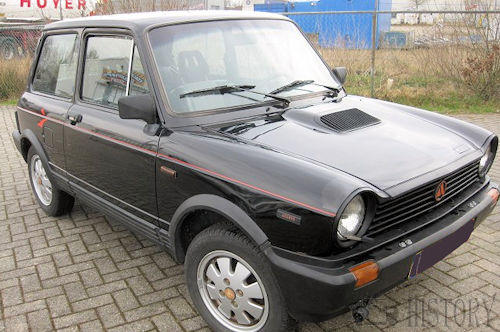 The seventh series, presented in 1984, only saw minor changes, largely remaining the same as the sixth. The taillights were again redesigned and were now joined by a reflective strip. The rear license plate was relocated to the bumper and the dashboard received modifications, more noticeable in the better equipped. The Abarth received standard front foglights, which were optional on the other versions. The Abarth also has red seatbelts, and the Abarth received alloys,The front corner lights were now white, instead of orange as before. (standard) heated rear window, rear window wiper-washer, reclining backrest headrests, tinted glass, iodine headlamps and rev counter . 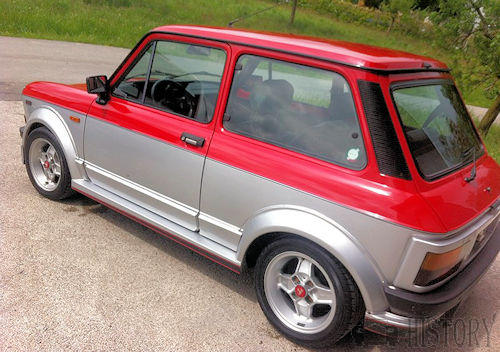