The Autobianchi A112 is a supermini produced by the Italian automaker Autobianchi. It was developed using a shrunken version of the contemporary Fiat 128's platform. The mechanicals of the A112 subsequently underpinned the Fiat 127. It was introduced in November 1969, as a replacement for the Bianchina and Primula, and was built until 1986, when it made way for the more modern Autobianchi Y10 (branded in most export markets as the Lancia Y10). Over 1.2 million A112s were produced in Autobianchi's Milan factory.

The A112 was available only with a 3-door body. It was offered with the OHV engine of 903 cc from the Fiat 850 capable of attaining 42 PS (31 kW). The Autobianchi represented the first appearance of this engine in a front-engine, front-wheel drive configuration which would later become familiar to a wider range of drivers in the top selling Fiat 127 and its derivatives. Claimed power increased to 47 PS (35 kW) in 1971, but without any mechanical changes having taken place.

In September 1971 the A112 E ("E" for Elegant, which also became its name after the 1973 facelift) was introduced. This featured improved seats, higher grade trimming and equipment, as well as a five-speed gearbox later in life. The mechanics were originally identical to the regular version, now referred to as the Normale, but from 1975 until 1977 the Normale' received a less powerful engine. A performance edition "Abarth" was introduced too. 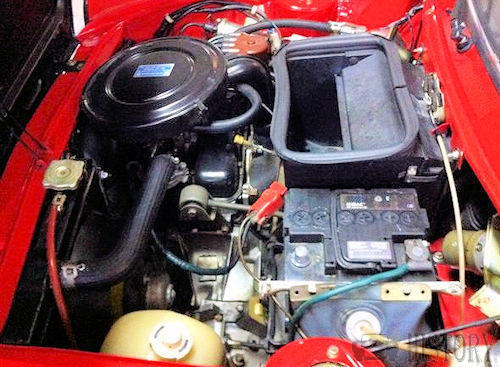 In March 1973 the A112 received a makeover. The grille was new, with a larger mesh, and the bumpers were now of rubber with chrome insert (although the Normale retained the old metal bumpers with rubber strips). A new style of alloys were also available, and the seats and dashboard underwent some changes. The Abarth received a new chess pattern upholstery.

In 1975 the third series arrived. The insides in the rear were recontoured, so that the car now became a five-seater (instead of four). The easiest way to spot a third series is that it received new, much larger vents on the C-pillars, as well as redesigned taillights - with integrated reversing lights on the Elegant and Abarth. The Abarth also received a new larger 1050 cc engine ("70HP"), while the Normale's output dropped to 42 PS (31 kW) in July 1975. All engines were still pushrod units, derived from the old tipo 100 engine first introduced in the Fiat 600. In 1976, due to new emissions standards, the Elegant lost two horsepower, now down to 45 PS (33 kW). Third series Normales still received metal bumpers, but from now on they were painted black (instead of being chromed) and no longer had a rubber strip. This was the last model to have the diamond shaped turn signals on the front fenders, with later models receiving more orthodox rectangular ones.

In November 1977 the "Nuova A112" (new A112) was introduced: The most obvious difference is a slightly taller roof, with a marked edge around the sides. This improved interior habitability considerably. Autobianchi also at this time modified the upmarket version branded as the "A112 Elegant" with an engine enlarged to 965 cc, now promising 48 PS (35 kW) and improved torque. Later, there were also "A112 Elite" and "A112 LX" versions which received even more comfortable equipment.

The 903 cc engine of the lesser A112 Normale remained unchanged.

In July 1979 the car underwent another styling modification, receiving large black plastic cladding on the rear, surrounding new taillights, and new side trim and bumpers. The grille was also new, and there was black plastic wheelarches to link all of the plastic parts together. The extractor vents behind the rear side windows were also larger, of black plastic, and wrapped around the pillar. In terms of transmissions, a five-speed transmission now became available on certain models. The fifth gear was an overgear, while the ratios of the four lower speeds and the final gearing remained unchanged. The front turn signals were moved from the front of the fenders to a spot just in front of the leading edge of the doors, while a small badge denoting the trim level appeared in the turn signal's old place.

In terms of trim levels, the Normale now became the Junior, and the Elite version was added, a notch above the Elegant in the lineup. There were some very light modifications to the interior. A large, rollback canvas sunroof became available on the Junior, and a rear window wiper became optional across the range. Aside from the new transmission there were no notable mechanical changes. Power outputs remained at 42, 48, and 70 PS (31, 35.5, and 51.5 kW respectively). The Abarth also received the new five-speed gearbox, as well as new alloy wheels and foglights as standard.

A lot of the plastic excesses of the fifth series were reversed for the sixth series, which was introduced in the autumn of 1982. New smoother bumpers, removal of the wheelarch trim, and a less heavy grille treatment brought back some of the original elegance of the A112, while the interior was also completely renovated. Another new version arrived, the top-of-the-line LX, which featured tinted windows, velvet seat trimming, power windows, metallic paintwork, and a digital clock amongst other creature comforts. Mechanically, the LX was identical to the Elite, with the five-speed transmission and 965 cc engine. The Elegant version was discontinued, with the Elite taking its position in the lineup. The sixth series also received new body-colored vents on the C-pillar, and the front corner lights were incorporated into the top of the bumper.

This was the first A112 to be marketed as a Lancia, originally only in Sweden and in Switzerland. In Sweden, this car was sold by Lancia dealers. In the Swiss market, the 903 cc engine no longer passed their stricter emissions standards, so the Junior received the same 965 cc engine as did the Elite and LX.

The seventh series, presented in 1984, only saw minor changes, largely remaining the same as the sixth. The taillights were again redesigned and were now joined by a reflective strip.[4] The rear license plate was relocated to the bumper and the dashboard received modifications, more noticeable in the better equipped Elite and LX versions. The Abarth received standard front foglights, which were optional on the other versions. The Abarth also has red seatbelts. While the Junior retained small hubcaps, and the Abarth received alloys, the rest of the range now received full-face hubcaps. The front corner lights were now white, instead of orange as before. The engines remained as before, all models except the lowest-priced Junior now used five-speed transmissions.

By this time, only France, Italy and Israel still used the "Autobianchi" badge; all others had switched to calling the car a Lancia. At the time of the seventh series introduction, a total of 1,115,000 A112s had been built.

As the new Autobianchi Y10 was introduced in 1985, the A112 range was cut down considerably, with only the Junior remaining on sale as a low-priced alternative. It was no longer called Junior, however, now being marketed simply as the "Autobianchi A112". Other than the name change, there were no design changes to the car. Production continued into 1986, at which point 1,254,178 Autobianchi A112s had been built. 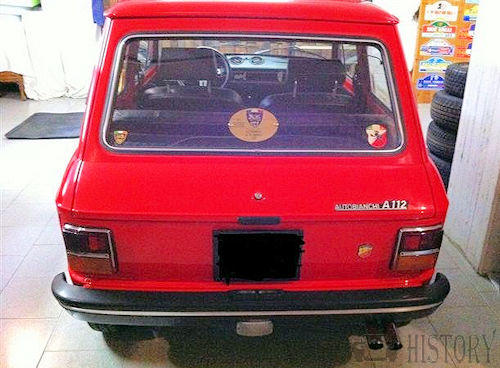