When your choke sticks or doesn't work 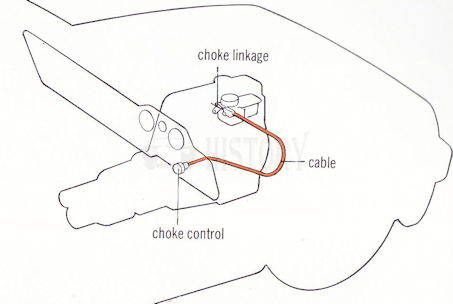 Car difficult to start in the morning or refuses to run properly when hot? Either way, a quick choke check could solve your problems

If your choke sticks on it will cause poor running when hot and an increase in fuel consumption at the very least. If it sticks off, or the cable breaks, you will have great difficulty in starting the car and driving all good reasons for getting to the bottom of the problem as soon as possible. Other, more major problems can give you similar symptoms as a sticking choke, but the choke is the most likely and is also the easiest to locate, check and put right.

There are several types of manual choke systems, but most work in roughly the same way by pulling a dashboard mounted knob. The knob is attached to a
metal rod and then to a cable as a one-piece unit. The inner cable is attached at the other end to an operating linkage on the carburettor.

The actual linkage varies according to the type of carburettor fitted but it is usually a simple spring loaded lever. The outer cable is attached to the dash panel at one end and to the carburettor at the other. This outer cable restricts the movement of the inner cable to a forward and backward direction allowing the choke mechanism to be pulled on and pushed off.

It may not always be clear that choke is sticking the control knob may appear to Work normally without actually doing anything. However, you notice some symptoms which will give you a clue that there is something wrong and whether it is sticking on or off If the choke sticks in the on postion, the engine will start Very easily from cold. But you should be able to feel a slight resistance when you push the knob back in.

You may notice uneven or high tickover, spluttering engine when hot high fuel consumption and bad starting when hot. If the choke sticks In the 'off' position when the choke knob is pulled out, the engine will run well when it is hot but Will be difficult to start from cold. If it does It Will not Pick up or pull Away until It has warmed up engine may also misfire spit or pop back through the carburettor when you press the throttle on starting

Before starting to track down the cause of a sticking choke it is a good idea to check the air filter first because a clogged air filter causes the engine to run with a very rich mixture of petrol and air just like a choke that sticks. If the air filter is clean, or if It is obvious that there is a problem because the choke knob control is excessively stiff or slack then,check each part of the system until you find the fault A dirty filter gives similar symptoms to a sticking choke.

NEXT: On to choke cable replace and fault find. 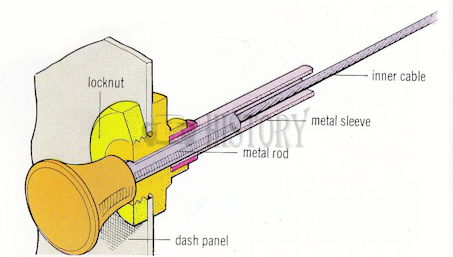