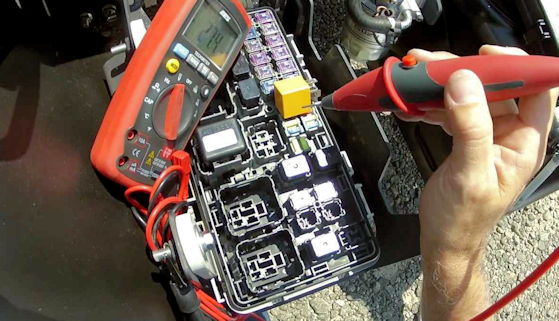 Relays are used like a switch that utilizes an electrical trigger signal to activate. Once a relay is activated it will connect  an electrical supply to a particular accessory. Most control relays work on the same principle even though their terminal configuration can vary slightly. There are two tests that need to be considered when dealing with a relay problem.

Is the problem with the actual relay or the power, ground or trigger circuits that activate the relay.

A relay is more prone to failure  when it is warm. A rely can be considered into two separate halves.

The first or primary half of the relay utilizes an electromagnet to close the  secondary electrical circuit inside the relay. This electromagnet is activated by a simple power (+) and ground (-) much like alight bulb circuit.

The second half of the relay is the "switch" that controls the power to a particular  accessory like a fuel pump or ignition system. So, to re-cap, if you activate the primary side of the relay (electromagnet)  it closes the contacts (switch) to supply power to operate an accessory. The relay primary side activation can be done manually, example:headlight switch on the dash  activates the headlight control relay to supply power to the headlights.

Or the relay primary side activation can be done automatically, example: When the PCM (computer) commands the fuel pump to turn "on" it will send an electrical  signal to activate the fuel pump relay. The secondary side of the relay is the "switch"  and does exactly as it is described; turn "off "and "on" power to an accessory.

The guide below covers the most popular wiring configuration. Most relays are located  in your car's fuse or power distribution center, to find a particular system relay  for your car consult your owner's manual or a car repair manual.

Terminals 86 and 85 are the primary half of the relay that utilizes an electromagnet to close (connect) the secondary electrical circuit inside the relay. This electromagnet is activated by a simple power (+) and ground (-) much like a light bulb circuit.
Terminals 87 and 30 are the secondary half of the relay that is the "switch" that transfer's electrical current from one terminal to the other.
Terminal 87a is not widely used and does not need to be connected for the relay to operate. 87a can be used for many different things such as relay activation monitoring or connecting a separate circuit that uses power when the relay is not in use.
Testing and Checking a Control Relay Guide:

Tools needed to perform these tests: Test light or a multimeter.

As the relay heats up in normal operation, the electrical contacts inside the relay can short circuit causing the electrical flow to stop. When the relay contacts cool it will resume the flow of electricity. To test for this problem attach two test lights to terminal 30 and 87. Attach the test lead to the both terminals, a small piece of wire works well for this. Reinstall the relay and monitor the test lights while in operation. If one of the test light bulb goes out while in operation replace the relay. If both test lights go out trace the main power supply to that relay, consult a wiring diagram from a car repair manual and repair as the short circuit as needed.
If too much amperage is being drawn through a relay circuit it can cause the relay contacts to "stick" not allowing the power to be shut off to the accessory. Example: When an ABS system motor ages it will draw excessive amperage cause the control relay to "stick". This condition will run down the battery in a short time until corrected.
Moister can get inside a relay hindering the relay operation.
While testing for power, ground is contacted causing the fuse for that circuit to fail.