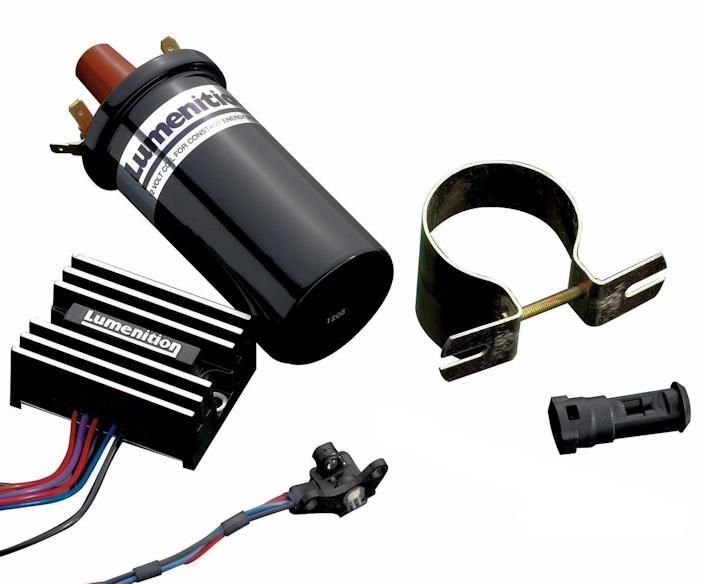 The ignition system in your  car ignites the fuel inside the engine's  combustion chamber at the optimal time in the piston stroke to produce the most  power while emitting the least amount of emissions as possible.  There are many configurations of ignition systems but all operate on the same principle,  create a low energy field and collapse it onto a high energy coil and that transfers  the electrical energy into the secondary ignition system, i.e. coil wire, distributor  cap and rotor (if equipped) plug wires and finally thespark plug. This system is triggered  by the primary ignition system, this system varies depending on manufacturer but  all operate on the same principle, use some kind of low voltage trigger system i.e.crankshaft position sensor  (CKP), camshaft position sensor (CAS).

This low voltage system (1.5 to 3.0 volts)  is amplified to 12 volts by using an ignition module (amplifier) and then transferred  to the primary side of the ignition coil. The PCM (powertrain control module) controls  the engine ignition timing by  advancing and retarding the primary trigger signal. In older cars a points, condenser  and a vacuum advance unit performed this job. We have listed the most popular causes  for an ignition system to fail  or misfire.

Step 1 - Anytime you have a problem with electronically controlled  components such as an engine, transmission, ABS brake, or SRS (supplemental restraint  system, air bag) inspect all fuses  using a test light  and check the under hood power distribution center and under dash fuse panels. If  all fuses test ok continue to the next step.

Step 2 - To check for problems with electronically controlled  components such as an engine, transmission, ABS brake, or SRS (supplemental restraint  system, air bag) and the fuses test ok a trouble code scan is needed to identify  any system trouble. Use a simple scanner tool toretrieve trouble codes and check if they relate to the specific problem, like  an ignition coil failure code. If a trouble code is present but does not pertain  to the immediate problem like an EVAP code, ignore it until a later time, after  the engine is running properly. The reason we repair non-related codes after the  engine is running properly is because sometime false codes can be triggered by a  rough running engine. Once the engine is running properly the code present might  cycle and turn itself off.

You might say "if the engine isn't running right shouldn't  it have a check engine light and a trouble code? "Sometimes conditions occur that  will not be detected by the computer, example: if the intake or exhaust valve operation  fails the computer cannot detect the failure because the problem is not sensor related,  so the engine doesn't run smooth and the computer thinks everything is ok with no  codes. If the trouble code retrieved relates to a cylinder misfire like an injector  driver or ignition coil failure first these problems and re-test system. If no trouble  codes are present proceed to the next step.

Step 3 - Check the ignition system basic output voltage, this  will test the ignition system by observing the spark from the ignition coil. This  is done using a test light and inserting the sharp probe into the end of the plug  wire boot allowing a sizable gap from the inside plug wire terminal and the test  light probe. If the engine does not run and you are testing the ignition system  output continue with this test. If you are testing the ignition system to troubleshoot  an engine cylinder misfire you will need to disconnect the fuel pump fuse or control  relay and bleed off fuel system pressure to stop the engine from starting. (note:  sometimes the engine will run slightly until excess fuel is burned) To locate the  fuse or relay for the fuel pump located in the fuse box or power distribution center,  if you cannot locate the fuse or relay consult your cars owner's manual or anonline repair manual  for their locations.

Step 4 - In this step remove the plug wire or ignition coil  wire to gain access to the end of the plug wire, coil wire or coil over spark plug  boot depending on a particular ignition system configuration. Ground the test light  lead to a known ground source like the negative battery terminal, insert the probe  end of the test light into the end of the boot creating about a 3/4 inch gap between  the probe and the terminal inside the boot. Position the boot and test light combination  for clear observation and away from rotation accessories. While observing the boot/test  light probe gap have a helper crank the engine over (keep hands and clothing away  from rotating accessories).

There should be a bright blue electrical spark between  the spark plug/coil wire/coil terminal and the test light probe. If your are testing  the system for a cylinder misfire continue this test for the remaining cylinders,  look for good spark quality if there is no spark present on a particular cylinder  inspect the plug wire, cap and rotor or individual ignition coil if corrosion is  present on any part of the terminals or wires replace the component and re-test.  If the coil has no electrical discharge output continue to Step 6, if electrical  discharge is present at the coil wire and not the plug wires continue to Step 5

Step 5 - If your car is designed with a distributor that has  a cap and rotor remove the distributor cap and inspect the rotor. The ignition rotor  transfers high voltage to the plug wires and then the spark plugs and can short  circuit to the distributor main shaft causing the spark to enter the distributor  but not exit. Remove the ignition rotor and check for burn or ash marks on the underside  of the rotor. Also inspect the coil wire and distributor cap terminals for corrosion,  look for any burn or ash marks on the wire or terminals. Replace any damaged, burned  or corrected components with new or quality used parts and retest system.

Step 6 - This next test will tell us if the primary ignition  system is supplying an electrical trigger pulse to the ignition coil. To test the  ignition trigger pulse remove the small wires from the coil. Using a voltage multi-meter  connect the leads to both wires and set the multi meter to DC voltage. Next have  a helper crank engine over and observe the voltmeter, if the meter jumps from 12  volts and then to zero in rapid succession the trigger system is working properly.  Next check the ignition coil for corrosion if no corrosion exists use thevoltage multimeter to test the coil  primary and secondary circuits for continuity and resistance. This testing procedure  will work for most automotive coils.

With all wires disconnected from the coil,  use a multi-meter switched to ohms and check the resistance between the small side  terminals of the coil. You should get a reading of 0.75 to 0.81 ohms of resistance.  Then check the resistance between on either side terminal and the center high output  terminal. The ohms reading should be about 10,000 to 11,000 ohms. Any significant  deviation from these numbers would indicate the coil is shorted and needs to be  replaced. If there is no primary ignition trigger output proceed to next step

In this  case the computer just thinks the engine is not cranking over, even though it is.  First turn the key to the on position, with the ignition coil connected to its wiring.  Then, using a test light or a voltage multi meter ground one side of the test light  or meter and test the coil terminals, there should be power on both sides of the  coil. If the coil doesn't have power, locate the main computer system control relay  and replace it with a new unit and re-test. If 12 volts is present continue to the  next step.

Step 8 - Locate the crankshaft position sensor (CKP) and camshaft  position sensor (CAS) (note: if your engine is designed with a distributor sometimes  the CAS is inside the distributor housing) disconnect the wiring connector to probe  the connector, there are three wires on most of these sensors so three tests are  needed. Set your multi meter to ac voltage and probe any two wires on the sensor  side, have a helper crank the engine over you should observe the multi meter jumping  between 0 and 2.5 volts on two of the three combinations.

Continue testing until three pairs of wires are complete. (i.e.: right outer and center, left outer and center and right and left wires) if no pulse is present remove the sensor and observe inside the mounting port with a flash light. While looking inside the port have a help crank the engine over, you should see a small hole or magnet used to trigger the sensor, if this trigger is present replace the sensor. Perform this test for both sensors if equipped, if the sensors test ok suspect the ignition module (amplifier) or PCM.

(Note: try disconnecting various sensors likeoxygen andcoolant temperature  and retest, sometimes a sensor can short circuit locking up the PCM-powertrain control  module. If ignition pulse is restored plug sensor in one at a time until ignition  pulse is lost, replace that sensor with new and reassemble.)

Engine cranks but won't start - For an engine to run, you need  three things to happen inside the engine, compression, fuel and ignition, without  any one of these components the engine will not run.

Rapid clicking sound when cranking - The starter is designed  to operate on a high amperage 12 volt system, when a starter is subjected to low  voltage or amperage (flow) it will cause the starter to engage and disengage rapidly  producing the rapid  clicking sound. To fix this problem a battery inspection or replacement is needed.  There are two reasons that a battery will not perform as it should, either thealternator has failed allowing  the batteries state of charge to become weak or the battery has failed and replacement  is required.

Unfortunately to check the alternator the engine must be running, so  you must eitherjump start  your car or replace the battery tocheck the charging system. If  the alternator output test is ok then the battery is bad and must be replaced. If  while driving the charge light indicator on the dash was not illuminated and the  battery is more than three years old the battery has probably failed.

Engine stalls at idle - At idle your engine produces the least  amount of emissions than in any other time it is operation. Engine idle is necessary  for proper  operation; it allows the engine to operate at the lowest RPM  level possible without your foot on the gas pedal. Before we start we need to know  one of two things is the engine running poorly causing the engine to stall at idle  or is the engine running fine and it's just the idle condition that is the problem.