How to Replace a car Electric Fuel Pump 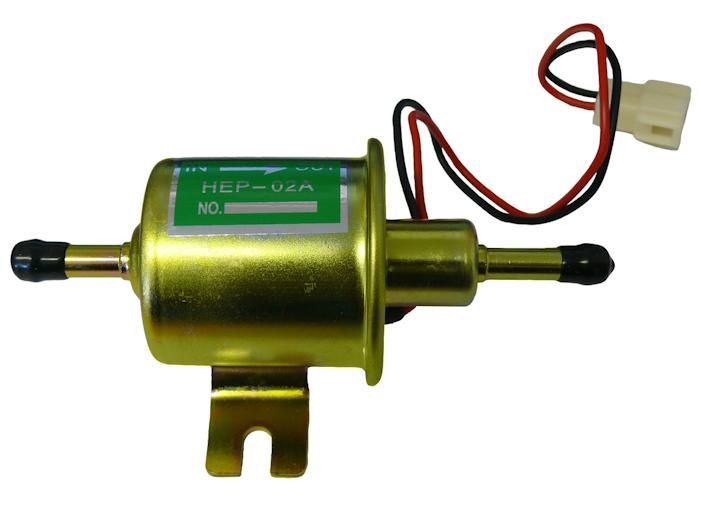 The fuel delivery system is vital  to the car's engine performance.  The engine is designed to operate  on a specific fuel system pressure. To maintain constant pressure, the fuel pump  is located in the fuel tank or as close as possible to the tank. The electric fuel  pump is an efficient fuel system supply pump but it must be located very near to  the tank or in the fuel itself to operate correctly. Most in tank fuel pumps are  comprised of an electric motor coupled to a small internal vein style of pump fixture.  From this fixture the fuel is brought into the pump and pressurized. Then, the fuel  travels into a fuel line at the top of the tank.

Most in tank pumps have a pressure relief valve that will allow the pump to bypass and allow the fuel to recirculation  inside the fuel tank. This is designed as a safety device in case the fuel line  becomes plugged or kinked. Some fuel pumps are designed with the fuel pressure regulator  built into the pump and helps keep the fuel system pressure adequate. When the fuel  pump relay is engaged it supplies electrical power to the pump. This fuel pump relay is controlled by the PCM  or BCM and must see engine rotation and air entering the engine via the mass air flow sensor before the signal is giving to activate the fuel pump relay.

The fuel level sender is usually connected to the fuel pump tank unit and is  purchased as one unit. Which is good because the fuel level sender is prone to failure  and will cause your fuel level gauge to stop reading accurately? Anytime you must  replace a fuel pump it is a good idea to run the vehicle as far out of gas as possible,  of course if the car is not running that is tough to do. The idea is to relieve  the fuel from the tank to avoid excesses weight when handling the gas tank. To relieve  the fuel tank from fuel insert a fuel line or hose into the tank and start a siphon  to drain the tank. If you cannot insert hose or line far enough into the tank to  reach fuel there will be another chance to drain the fuel later on. To test a fuel  pump a fuel  system pressure test must be performed.

Once this test has confirmed the fuel  pump has failed it must be replaced. To access the fuel pump the fuel tank must  be removed in most cars. But, some car's have planned for this eventuality and have  design a service hatch either in the trunk or under the rear seat. When the fuel  pump fails in a truck there is the option to remove the bed to access the fuel pump  assembly. Needless to say fuel is very flammable so take precautions to avoid fires,  that means no smoking or pilot lights from a water heaters or clothes dryers. Always  have a first aid kit available for minor cuts, also have an eye wash station set  up incase fuel accidently enters the eyes.

Park your car on level ground with the engine off and the emergency brake on.  Always raise a car according to the manufacturers recommended instructions and secure  with jack stands. Also we will be dealing with gasoline so be sure to wear protective  clothing, eyewear and gloves.

Step 1 - Start by locating the hood release to open the hood you car, use a prop  rod to secure the hood if needed.

Step 2 - Remove the negative battery  cable from the battery to stop electrical power from the car. (Note: record  the radio pre-set station so you can reenter them when the job is complete).

Step 3 - The gas tank has a fuel fill hose and fixture that is connected from  the fill port to the gas tank. Either disconnect the hose from the tank or remove  the mounting nuts at the neck of the fill port, which ever is easiest. (Note: there  maybe fuel present when the hose is disconnected so be ready with a gas can to contain  it).

Step 4 - Next, remove any heat or mud shielding around the fuel tank to gain  access to fuel lines and the electrical connector located at the top or near the  fuel tank.

Step 5 - (Optional step) It sometimes aids in the removal of the fuel tank to remove the driveshaft from the car. This step only applies if it hinders the removal  of the tank.

Step 6 - There are two to three fuel lines at the top of the gas tank along with  an electrical connector. If you can access these fuel lines and connector at this  time please remove the lines and connector from the tank. If these are not accessible  we will execute this step at a later time. (Note: some vehicles are equipped with  a quick disconnect fitting that requires at special release tool to operate the  fitting.

Step 7 - Support the fuel tank and undo the fuel tank mounting strap nuts. Remove  the nuts slowly and guide the tank out of the car. (Note: using blocks of wood and  a floor jack can aid in this step).

Step 8 - If the fuel lines or electrical connector was not accessible with the  tank fully mounted in the car, you should be able to reach the lines and connector  as the tank is coming out of the car. Stop the removal of the tank about half way  and complete the gas line and connector removal.

Step 9 - Once the tank is out of the car undo and remove the retainer ring from  the fuel tank that is located on top of the fuel pump assembly. This is done by  moving the ring counter clockwise.

Step 10 - Now remove the fuel pump assembly from the tank. Match the replacement  part with the original pump.

Step 11 - Inspect inside the fuel tank for dirt and debris and clean as needed.  Also clean the dirt from the mounting area of the tank were the O ring seal resides.

Step 13 - Make sure all fuel line sealing O rings and electrical connector is  free from dirt before reassembly.

Step 15 - Reconnect the battery,  and refill the tank with fuel.