Car door Will Not Latch Close

Reset Car Door Latch as Will Not Close

On any Car there are many compartments that open and close at will of the user.  These compartments can vary from the car hood, doors, trunk, glove box and  center-upper consoles. The one thing all of these compartments have in common is  a latch mechanism that holds the lid, door or hood closed and then open when needed.  Most latches contain a locking device that allows the user to lock the operation  of the latch. On the opposite side of all latches is the "striker" which is the  part where the latch holds onto when closed. This latch mechanism is designed to  hold the striker within the latch clasp.

When the clasp is released in the latch the striker is free to move allowing  the lid, hood or door to open. For the latch to work properly the alignment of the  striker is crucial. If the latch is not aligned properly the latch will stick or  not open/close. The hinge is on the opposite side of the latch which is equally  important. If these hinges are allowed to move excessively the striker will be out  of place causing the striker to be in the wrong location and this can impair thelatch operation.  All hinges should be free from lateral movement and maintained by applying lubricate  at regular intervals. To ensure proper latch operation all moving parts must be  free from dirt and grime. To clean a door or compartment latch use a mild solvent  or soap. Once clean, dry thoroughly and apply lubricate as needed. 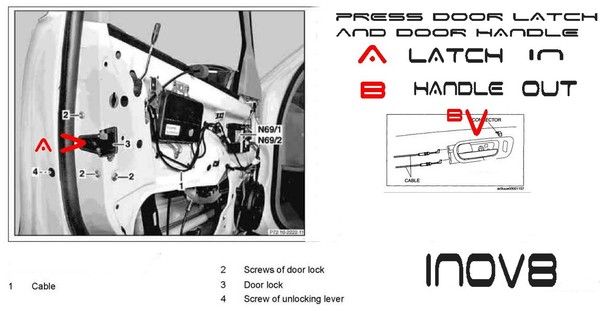 Depending on application some latches are equipped with an electric solenoid  that can automatically open or close the lock with a simple key fob or electronic  switch command. A switch command can be activated manually or by theBCM (body control module)  computer. These automatic controlled latched also possess the ability to detect  the use of force is used to overpower the latch as in a criminal act. When the latch  is overpowered the car alarm will  sound to alert the car owner.

Occasionally the alarm system will be accidently activated. If this occurs simply  close all doors, hood and trunk, then lock and unlock the drivers  door. This action  will disarm the alarm and resume normal status. Sometimes when a latch is opened  it can have a "rebound" effect that can sometimes close the latch the second it  opens. When a "rebound" occurs the door, hood or truck opens but the latch is now  closed and will not except the striker and will not allow the door, hood or lid  to close. This mean the latch will have to be opened before it will reconnect to  the striker.

How to Open a Latch

Preferred Procedure: Always unlock the door or lid before you begin.