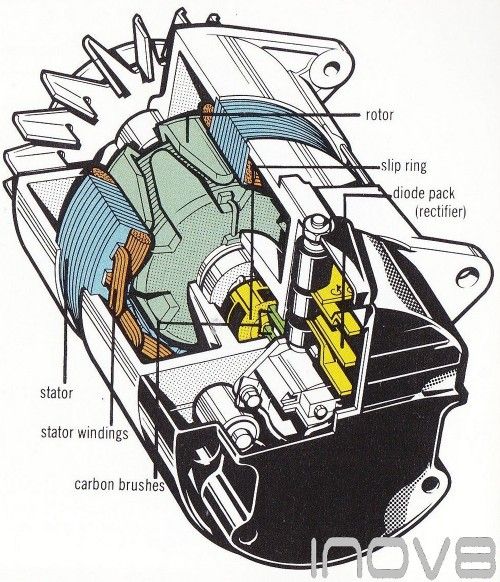 Except  for the  Lucas  ACR series, most  alternators with internal brushes are difficult  to dismantle  and  can only be repaired by an auto electrician. On  ACR  types, use  a socket spanner to undo  the two recessed bolts which hold  the black slip  ring cover  (fig 1). Make  a note  or draw a diaorarn of the wiring (fig 2)  and then disconnect  the  connection from the brush holder to the diode pack.

Then undo the  screws  which  hold   the  brush  holder and  the surge  diode to  the alternator  casing  (fig 3) - some ACR models also have a screw holding the voltage regulator to the casing - and  lift the  brush holder away  (fig 4). Undo the small  bolts  holding the bushes  to the brush holder making a note  of the positions of the wires to the regulator (fig 2). pull  the brushes out of the holder (fig 5)

The brush nearest  the  centre should have a small  flat  spring fitted  along- side  it. Check  the length of the brushes (fig  6) and if they are less than 3/16  in. (5 mm) in length buy some  new  ones. Clean  the holder with  meths and  then  fit the new brushes into place remembering to fit the flat spring suppled with the brushes  (fig 7). replace thel small bolts  that hold the brushes. together with any wires  that  were under them Now reassemble the unit.

The only  alternator with  an internal  regulator  which can be easily  dismantled  IS  the Lucas ACR type, -The  regulator is a sealed  transistorized  unit  so  it can not  be   repaired   if it  is faulty you  will need  a new one, There  are  several  different types  of regulator and   it is best to take  the  old  one  to  your dealer to make   sure   you  get  the right  one, If the  original  type of regulator  is  not  available your dealer will be  able   to  offer   an alternative type   which   will fit, To remove  the  requlator,  first undo the slip  ring cover and  find   the  regulator screws  Some  models    have   two screw  one to the  alternator body and one  to the  brush holder (fig  1) -  others  are held by  one screw on  to the brush holder (fig I), Draw  a diagram  of the regulator connections  and  then remove them.  Undo  the  screws  and  lift the regulator  away,  Fit the new regulator into place  and reconnect  all the  leads. finaly  refit the slip ring cover. 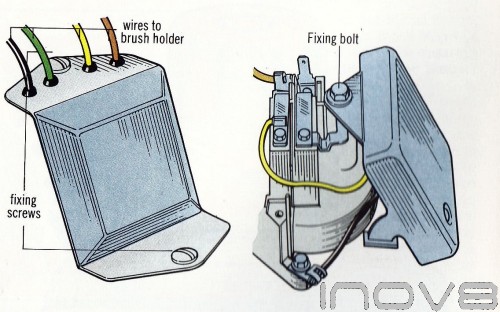 The diode  pack,  or rectifier, is, bolted to the rear  bracket   of the alternator.  It is connected to the windings   by three wires wich are  soldered   in place,  so to change   the  pack   the  wires must  be  unsoldered.  If you  do want to solder,   save  money strippinq   the  unit  yourself d  then   taking it  to an  auto electrician to have the soldering done  Make  a note of where  the three wires  go (fig  1) and  then unsolder each  one -   use', a pair of long-nosed   pliers  to grip  the Wire as close  to the diode  pack as possible.Apply the soldering  iron to the terminals for a few seconds   until the wire  comes  loose and quickly pull  the  wire  outwards away  from the terminal. With all three  wires  removed undo  the  nut holding  the  diode pack  to  the   alternator  (fig  1). Some types  are  also held  inside the  casing  by  an extra  nut and racket, so remove  this, if fitted. As you lift the pack  out notice the   position  of the washers   and the  small.  black rubber cap. These  must  be   transferred  to the new  pack  before  fitting it. place the new diode  pack  into pcsition  and  tighten up the securing  nut. Fit the three  wires to their   terminals,  and  solder them into position.  Do not keep the soldering  iron on  the terminal  for  more than a  few seconds at a time the  diode pack has  delicate components that are  easily  damaged.  Again, use the long-nosed pliers  to grip the wires as this will help conduct  the heat  away. 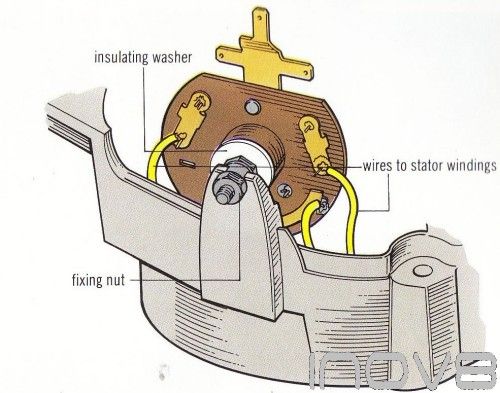 Diode Pack Held in by a nut it has 3 wires

Check the bearings for wear

A alternator which  is noisy  in operation usually  has  worn bearings. If  the  noise  is only slight then it is probably not worth doing  anything  about,  but  a  loud  rattling or  'graunching' nose  should  not be  ignored. To check the front bearing  for wear hold  the  alternator  firmly and  spin  the pulley  - it should rotate smoothly, any roughness or grinding  noise means that the bearing  is worn. Also try to rock the pulley  from side to side (fig 1) -  very slight movement   is acceptable, so long as  the bearing  does not sound rough but if the play is more than 1/16 in,  (1,5 mm)  then  the  bearing must be replaced  The rear bearing is  more difficult  to check  as the alternator  casings  have to be separated  (see Step 4) to get at it. Once you have separated the alternator casings, check the bearing  by spinning it. It should not feol rough or make a grinding noise  In practice  the rear bearing  seldom wears as it .has very  little  load, unlike  the front bearing  and is well  protected from dirt  by the alternator casing, 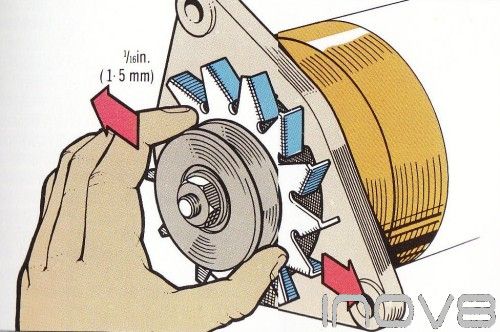 The   rotor   has   to  be   removed before  the  front  bearing  can  be changed. To remove it, hold  the rotor  tightly and undo the  nut on the end  of the shaft (fig  1). This is often very tight use rags or wear a pair  of rubber gloves  to get some  extra  grip.  Take  off the spring  washer  and  put  it safely to' one  side. Using  two  flat-bladed  screwdrivers

The front bearing  in  an  alternator is a ball bearing race very similar  to the ones  used  in dynamos. These  are sealed-for- life   units    so   once    dirt    has entered   the bearing  it will wear out quickly. Apart  from an over- tightened  drive   belt,  the  main cause of bearing  failure  is dirt getting  past  a damaged  seal. The  bearing is  held  in by  a circlip  which locates  in a groove in the  front bracket.  Hold a rag over  the circlip  and  prise  it out with  a long,  flat-bladed  screw driver  (fig  1). Do this  carefully a's the circlip  is very  springy.With  the  circlip  removed the bearing is simply  pushed out If  it   sticks use a  socket  and hammer .to  tap  it out. Make  a note of the  position  of washers  spacers   or seals  (fig 2).

Reassembly  is quite  straight frorward.  Fit the  new  seal  and bearing   into  the  front  bracket, gently tapping  them into place  if necessary. Once  the bearing   is properly  seated   push  the circlip back  into its groove  with two screwdrivers.    This requires patience  as it is a fiddly job but it will go in eventually. Refit the  bracket    to the  rotor by  tapping  the front  bracket with a soft-headed  mallet.  Alternatively,  use a  press   to fit the rotor into the bracket.

To change the rear bearinq, separate   the two casings of the alternator  and remove  the  slip ring  Then using two screwdrivers  carefully try to lever the bearing off the  rotor shaft (fig 1).  If  it is very  tight you will have  to use a bearing   puller to remove  it or have  it removed by an  auto electrician. Fit the new bearrnq by  tapping  it into place   on the  rotor  shaft  using  a socket  as a drift (fig 2). Refit the slip  ring  and  reassemble the alternator