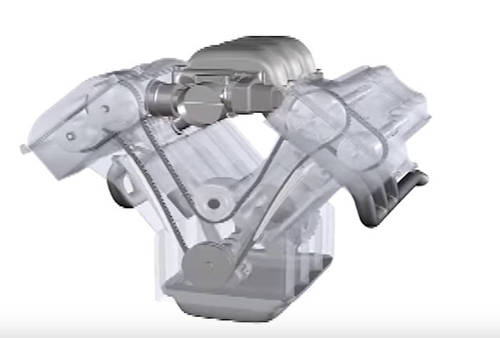 Today's engines have been designed  with more complexity and moving parts than ever before. Most of the time when you  hear a clicking,squeaking,whirring orrattling sound there is something going wrong.  Excess engine noise is due to excessive clearance between two metal parts that should  have little to no clearance. This clearance can be due to several things from a  broken valve spring to a valve lifter sticking. Identify where the engine noise  is being generated, with the engine running try to isolate where the noise is coming  from in the engine, either the upper half, lower half, front half or rear half.

Listen from above the engine or below the engine as this will help determine  where to start looking for the cause of the noise.  To avoid engine noises change your engine oil every 3,000 miles. We have listed  the most common reasons for excessive engine noise below. Some engine noises are  normal for example: some Chevy and Ford engineshave short skirt pistons or all roller valve  train, a minimal amount of engine ticking noise is normal. Most cars  have fuel injectors  that will make a slight clicking noise when the engine is idling. These noises are  normal and no repair is required, but if you have other unexplained noises we have  listed the most common reasons for engine noise.

Check the engine oil level, your engine  depends on clean engine oil to lubricate the internal moving parts, if the engine  oil level is low or the oil is dirty it can cause internal engine parts to malfunction.  For example: a valve lifter is responsible for holding valve train clearance to  a minimum, if the oil level is low or dirty it can cause the lifter to malfunction  which will allow excess valve train clearance creating engine tapping or clicking  noise. In extreme cases or when your engine has run out or close to out it can cause  one of the many bearing surfaces to fail causing permanent engine damage and noise  until repairs have been made. If this condition is left unattended the engine will  suffer permanent damage and fail. If your engine is making a noise change the engine  oil and filter with the manufacturers recommended weight (viscosity) oil first,  if that does not make a difference engine repair work is needed.

To check for asqueaking noise that could be generated  by the engine accessories, accessory mounts,serpentine belt or drive pulleys.  When an accessory, accessory bracket, belt or drive pulley fails it can make a rattling,  squeaking or tapping noise. These sounds are centrally located near the front of  the engine. With the engine off, check the tension of the belt/belts, it should  be at medium tension a loose or worn belt can make a loud squealing or chirping  noise, check the belt  tensioner and the size of the belt to make sure the right belt is installed.  To isolate the origin of the noise, remove the serpentine belt and start the engine.  If the sounds disappears an accessory, accessory bracket, belt or pulley has failed.  With a flashlight inspect the brackets and pulleys that connect the alternator, air conditioner compressor,power steering pump, and air pump if equipped to the engine.  Look for signs of rust, this indicates broken or loose metal parts rubbing together  which can generate squeaks and ticking noises. Replace the failed bracket or pulley  as needed and recheck. If the bracket is ok rotate each accessory by hand to check  for hard spots or seized bearings in the accessory and replace as needed.

If you hear a lighter  tapping noise from the upper half of the engine, shut the engine off and remove  the valve covers. A  camshaft is commonly used to operate poppet valves in a piston engine. A cylindrical  rod is situated in the cylinder block or cylinder head that has oblong lobes or  cams which push open the intake and exhaust valves. This force is applied on the  valve directly or through an intermediate mechanism such as a rocker arm, lifter  (cam follower) and push rods that are used to press against the valve for movement.  Each valve utilizes a spring that will return the valve to its original position  (closed) after the force is removed. If a valve spring has broken or a cam lobe  is worn down it will cause the engine to create a tapping or clicking sound. To  test for this condition, remove the ignition coil connector, ignition system or fuel pump fuse to disable power to  the ignition or fuel system.

Remove the valve covers to gain access to visually inspect the valve train. Have  a helper crank the engine over while you watch the rocker arms or cam lobes, make  sure they are all going up and down the same amount, if one or more lobes are traveling  less than the others you might have a flattened cam lob and the camshaft needs to  be replaced or a hydraulic lifter/follower (where applicable) that has collapsed  and will need to be replaced. Also inspect the condition of the valve springs, use  a flashlight and small mirror to aid in the inspection if needed. If a broken valve  spring is discovered it will need to be replaced to correct the problem. And the  final check, look at the height of the valve springs and retainers when in the closed  position (pressure off) they should be exactly the same height. If one valve is  higher or lower something is wrong with the cylinder head, valve or valve seat and  needs to be repaired.

If a heavier  noise seems to be generated from the lower half of the engine the problem can be  more serious and disassembly maybe required. But, sometimes a lower engine noise  could be generated due to excessive carbon (carbon is a natural by-product of the  combustion process) build up on top of the piston. This noise is created when carbon  is compressed between the piston and the cylinder head. If you elect to perform  a de-carbon procedure start and run the engine until warm, have a helper hold the  engine at about 1500 RPM. As the engine is running poor a small amount of water  down the throttle body, about a cup, you are creating a steam cleaning effect to  break up the carbon that will exit the engine. Don't worry if steam is generated  from the exhaust during the treatment,  this is normal. If noise is gone after the treatment the carbon has been removed,  if the engine noise is still there lower engine dis-assembly is required.

Humming or Honking Noise, (Ford Cars and Trucks Only)

The IAC motor (idle air control)  controls idle air to the engine. This process enables the computer to adjust idle  engine idle speed. Ford has manufactured an IAC motor  (idle air control) that creates a loud humming sound, almost like honking when it  fails. If your engine is generating this noise replace the IAC with a new unit and  recheck system.

Chirping Noise with the Serpentine Belt Removed, (Ford Cars and Trucks  Only)

Ford V6 and V8 engines only with a CAS (cam angle sensor). Starting  in the 90's Ford started to manufacturer engines equipped  with a CAS. This sensor assembly is basically a distributor housing with a  sensor and trigger plate mounted to a center shaft. This center shaft is driven  by the camshaft. The problem is, Ford slowed the oiling to the distributor housing  and this causes the housing to seize to the center shaft. The CAS seizes due to  lack for oil making a high pitched squeaking noise, like a loose belt. To check  for this condition remove the serpentine  belt and restart the engine. If the noise is still there suspect the CAS, remove  the unit and (by hand) spin it. If the unit has failed it will be rough to turn,  either dissemble the unit to clean or replace the CAS housing with new.

Engine Making Noise From the Rear - An engineflex plate is used inautomatic transmission  cars. It is used to connect power form the engine to the torque converter of the transmission.  When a flex plate fails it usually cracks at the crankshaft mounting bolts. If the  flex-plate is cracked it will make little to no noise at idle, and make more noise  depending on how much load the engine is under. The more throttle that is applied  the louder the noise will become. To check for this condition remove the flywheel  inspection plate or cover. Using a small flashlight and mirror, check for signs  of rust dust near or around the bolts. Rust dust indicates broken or cracked metal  on metal contact. It is these cracks flexing back and forth that generate the ticking  noises. Once this condition has occurred the only way to repair the problem is to  replace the flex-plate. This requires removing the transmission  from the engine.