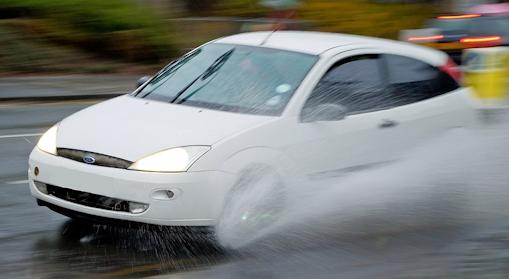 Aquaplaning or hydroplaning by the tires of a road vehicle, aircraft or roller coaster occurs when a layer of water builds between the wheels of the vehicle and the road surface, leading to a loss of traction that prevents the vehicle from responding to control inputs. If it occurs to all wheels simultaneously, the vehicle becomes, in effect, an uncontrolled sled. Aquaplaning is a different phenomenon from water on the roadway merely acting as a lubricant .Traction is diminished on wet pavement even when aquaplaning is not occurring.

Every vehicle function that changes direction or speed relies on friction between the tires and the road surface. The grooves of a rubber tire are designed to disperse water from beneath the tire, providing high friction even in wet conditions. Aquaplaning occurs when a tire encounters more water than it can dissipate. Water pressure in front of the wheel forces a wedge of water under the leading edge of the tire, causing it to lift from the road. The tire then skates on a sheet of water with little, if any, direct road contact, and loss of control results. If multiple tires aquaplane, the vehicle may lose directional control and slide until it either collides with an obstacle, or slows enough that one or more tires contact the road again and friction is regained.

The risk of aquaplaning increases with the depth of standing water and the sensitivity of a vehicle to that water depth.

There is no precise equation to determine the speed at which a vehicle will aquaplane. Existing efforts have derived rules of thumb from empirical testing In general, cars aquaplane at speeds above 53 mph (72 km/h), where water ponds to a depth of at least 1/10 of an inch (2.5 mm) over a distance of 30 feet (9 meters) or more.

What the driver experiences when a vehicle aquaplanes depends on which wheels have lost traction and the direction of travel.

If the vehicle is traveling straight, it may begin to feel slightly loose. If there was a high level of road feel in normal conditions, it may suddenly diminish. Small correctional control inputs have no effect.

If the drive wheels aquaplane, there may be a sudden audible rise in engine RPM and indicated speed as they begin to spin. In a broad highway turn, if the front wheels lose traction, the car will suddenly drift towards the outside of the bend. If the rear wheels lose traction, the back of the car will slew out sideways into a skid. If all four wheels aquaplane at once, the car will slide in a straight line, again towards the outside of the bend if in a turn. When any or all of the wheels regain traction, there may be a sudden jerk in whatever direction that wheel is pointed.

Control inputs tend to be counterproductive while aquaplaning. If the car is not in a turn, easing off the accelerator may slow it enough to regain traction. Steering inputs may put the car into a skid from which recovery would be difficult or impossible. If braking is unavoidable, the driver should do so smoothly and be prepared for instability.

If the rear wheels aquaplane and cause oversteer, the driver should steer in the direction of the skid until the rear tires regain traction, and then rapidly steer in the other direction to straighten the car.

Prevention by the driver

The best strategy is to avoid contributors to aquaplaning. Proper tire pressure, narrow and unworn tires, and reduced speeds from those judged suitably moderate in the dry will mitigate the risk of aquaplaning, as will avoidance of standing water.

Because pooled water and changes in road conditions can require a smooth and timely reduction in speed, cruise control should not be used on wet or icy roads.