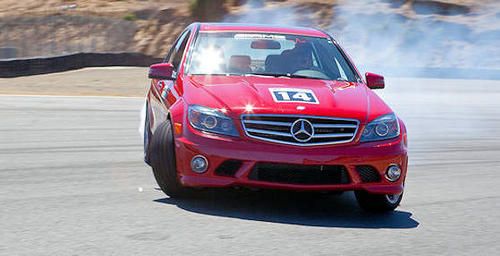 A bootleg turn is a driving maneuver intended to reverse the direction of travel of a forward-moving automobile by 180 degrees in a minimum amount of time while staying within the width of a two-lane road. This maneuver is also known as a smuggler's turn, powerslide or simply a bootlegger.

The turn is performed by putting the vehicle quickly into a lower gear, usually the second gear, and quickly turning the wheel in the direction of the opposite lane. If performed correctly, the vehicle will enter a controlled skid, enter the opposite lane and turn completely around. In a perfect bootleg turn, the car will be at a complete stop at the end of the maneuver and ready to accelerate and depart in the opposite direction.

It is easier to initiate this on some cars by initially applying a flick of the steering wheel the wrong way, before turning it in the direction the driver wants to go. This maneuver (known in racing as a Scandinavian flick) increases the load transfer to the outer wheels.

Classic bootleg turns can be performed only on cars with a manual transmission and are most easily done on a rear wheel drive car, as the spinning back wheels aid in the turn. This is because the maneuver is essentially a controlled fishtail-like spinout. Vehicles with an automatic transmission can be modified to make a bootleg turn possible. This is most commonly done for stunt vehicles used in motion pictures, to reduce the stress on the stunt driver to change gears while turning.

The name of the turn originates from the Prohibition era of the United States, when bootleggers transporting illegal liquor would use the maneuver to escape from police officers. Bootleggers were notorious for using modified high-speed cars to transport their goods and for using daring driving maneuvers to escape authorities. The man credited with inventing the bootlegger turn is Robert Glenn "Junior" Johnson, who ran liquor from his father's moonshine still and went on to become a highly successful NASCAR racer.

Other nations and languages have their own colloquial names for the maneuver. For instance, it is known as "Cavalo-de-pau" (wooden horse), "Baianada" (a pejorative reference to the state Bahia) in Brazil or "police turn" in Russia.

A moonshiner's turn, or J-turn, begins instead with a stationary automobile accelerating straight backward