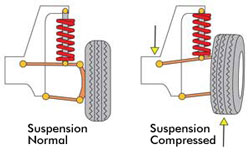 Bump steer or roll steer is the term for the tendency of the wheel of a car to steer as it moves upwards. It is typically measured in degrees of steer per metre of upwards motion or degrees per foot.

On modern cars the front of the tire moves outwards as the suspension is raised, a process known as the front wheels "toeing out". This gives roll understeer. The rear suspension is usually set up to minimise bump steer, where possible.

Typical values are from two to ten degrees per metre, for the front wheels.

Solid axles generally have zero bump steer, but still have roll steer, in most cases. That is, if the wheels move upwards by the same amount, they tend not to steer.

Roll steer is an important part of the budget used to define a vehicle's understeer, known as a Bundorf analysis.

In a bump steer, both wheels rise together. In roll steer, one wheel rises as the other falls. Typically this produces "toe in" on one wheel, and "toe out" on the other, thus producing a steering effect.

The linearity of the bump steer curve is important. If it is not straight then the length of the tie rod needs to be adjusted.

Bump steer can be made more toe out in bounce by lifting the rack or dropping the outer tie rod, if the rack is in front of the axle. The reverse applies if the rack is behind the axle. Usually only small adjustments (say 3mm) are required.