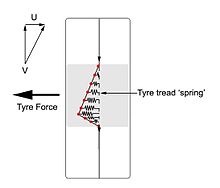 Cornering force or side force is the lateral (i.e. parallel to the road surface) force produced by a vehicle tire during cornering.

As with deformation of a spring, deformation of the tire contact patch generates a reaction force in the tire; the cornering force. Integrating the force generated by every tread element along the contact patch length gives the total cornering force. Although the term, "tread element" is used, the compliance in the tire that leads to this effect is actually a combination of sidewall deflection and deflection of the rubber within the contact patch. The exact ratio of sidewall compliance to tread compliance is a factor in tire construction and inflation pressure.