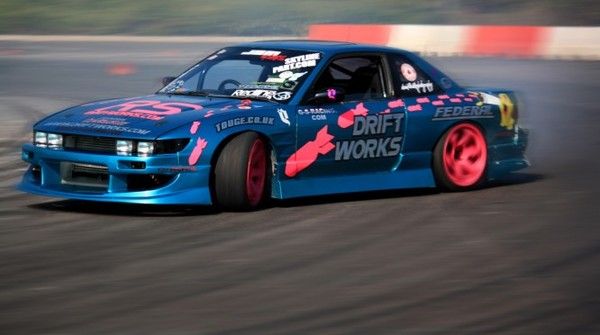 A proper mechanical limited slip differential (LSD) is almost considered essential for drifting. Attempting to drift with an open or viscous differential in a sustained slide generally yields relatively less impressive results. All other modifications are secondary to the LSD.

The preferred form of LSD for drifting is the clutch type, in "2-way" form, for its consistent and aggressive lockup behavior under all conditions (acceleration and deceleration). Some drift cars use a spool "differential", which actually has no differential action at all - the wheels are locked to each other. Budget-minded drifters may use a welded differential, where the side gears are welded to give the same effect as a spool. This makes it easier to break rear traction because it reduces maximum traction in all situations except traveling in a straight line. Welded differentials have an inherent risk involved, due to the tremendous amounts of internal stress the welds may fail and the differential completely locks up leaving the rear wheels immobilized. Helical torque sensing types such as the Torsen or Quaife (available on cars in certain stock trims such as S15, FD3S, MX-5, JZA8x, UZZ3x) differentials are also adequate.

The clutches on drift cars tend to be very tough ceramic brass button or multiple-plate varieties, for durability, as well as to allow rapid "clutch kick" techniques to upset the balance of the car. Gearbox and engine mounts are often replaced with urethane or aluminum mounts, and dampers added to control the violent motion of the engine/gearbox under these conditions.

Gearsets may be replaced with closer ratios to keep the engine in the power band. These may be coarser dog engagement straight cut gears instead of synchronised helical gears, for durability and faster shifting at the expense of noise and refinement. Wealthier drifters may use sequential gearboxes to make gear selection easier/faster, while sequential shift lever adapters can be used to make shifts easier without increasing shift time.

The suspension setup on a drift car tends to be set up similar to a road racing car.

Chinese and Taiwanese manufactured suspension components are popular in contemporary drifting, mainly due to their afforability compared to more bespoke products from Europe and Japan. Although high end suspension is still popular at competition level drifting, there are numerous competitors using entry level coilover suspension with success.

Because of the large centripetal force encountered during drifting, drivers find it preferable to be retained firmly by a bucket seat, and harness. This allows the hands to merely turn the wheel, as opposed to bracing oneself against the wheel. The steering wheel should be relatively small, dished, and perfectly round, so that it can be released and allowed to spin through the hands as the caster returns the front wheels to center. The locking knob on the hand brake is usually replaced with a spin turn knob, this stops the hand brake locking on when pulled. Some drivers move the hand brake location or add an extra hydraulic hand brake actuator for greater braking force. Many drivers make use of additional gauges to monitor such things as boost levels, oil, intake and coolant temperatures.

Competitive level drift cars run anything from turbocharged 4-cylinder engines, to big-displacement V10 engines. The power produced can range anywhere,from 400hp to even 1000hp+, even though peak horsepower figures are not necessarily beneficial. Larger-displacement engines are typically in favor. These engines can be tuned in a manner where peak horsepower is reduced in order to have a wider torque band for easier throttling in any circumstance and have greater reliability.

Steering angle and geometry is often modified to increased steering angle so that it is possible for the car to achieve greater drift angle and aiding in spin recovery. Modified steering racks/tierods, and revised steering knuckles that effect ackerman angle are common. With the combination of well set up suspension and tire selection, many cars are capable of achieving a 90-degree drift without spinning out.

Chassis preparation is similar to a road racing car. Roll cages are sometimes employed for safety, and to improve the torsional rigidity of the car's frame, but are compulsory in events that involves the 2+ cars' tsuiso runs in the event of a side collision. Front and rear strut tower braces, B-pillar braces, lower arm braces, and master cylinder braces are all used to stiffen the chassis. The interior is stripped of extraneous seating, trim, carpet, sound deadening; anything that is not essential is removed to reduce weight.

Body kits are often attached with cable ties. When the body kit meets the wall or curb, the cable ties snap, releasing the part, as opposed to breaking it.

As drift cars are pushed faster, aerodynamic tuning becomes more important as well. Rear spoilers and wings usually are useful only in large, open tracks where the cars develop enough speed to create a need for more downforce. Wheel arches are often rolled or flared to allow the fitment of larger tires. Airflow to the engine is critical, so the hood is often vented.

Due to the nature of the hobby, drift cars are typically involved in many minor accidents.

Competitive drifters often run DOT-approved tires closer to racing tires, which is permitted, with the exception of some major championships including D1GP which only permits commercially available tires that are approved by them. Professional drifting has come to a point where the maximum amount of tire grip is necessary to be competitive in terms of sustaining speed, and stability in a drift.

Grassroot level Japanese cars with low horsepower quite often have different tires on the front and back. The tires with more grip are used up front and harder compounds in the rear to be able to spin the rear wheels in a higher gear while still being able to maintain a reasonable speed in a drift. 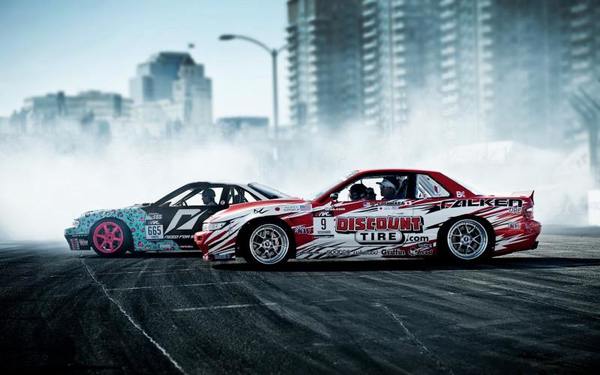