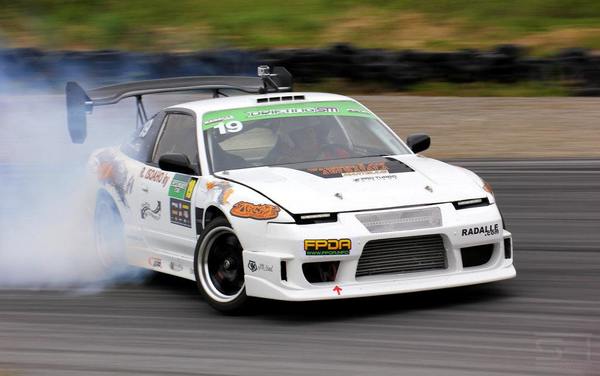 Drifting is a driving technique where the driver intentionally oversteers, causing loss of traction in the rear wheels, while maintaining control from entry to exit of a corner. A car is drifting when the rear slip angle is greater than the front slip angle, to such an extent that often the front wheels are pointing in the opposite direction to the turn (e.g. car is turning left, wheels are pointed right or vice versa).

As a motorsport discipline, professional drifting competitions are held worldwide and are judged according to the speed, angle and line taken through a corner or set of corners.

Drifting started out as a racing technique used by drivers in the 1920s and 30s such as Tazio Nuvolari (who invented the technique, according to Enzo Ferrari) and in the 1950s by Stirling Moss. It became popular in the All Japan Touring Car Championship races. Motorcycling legend turned driver, Kunimitsu Takahashi, was the foremost creator of drifting techniques in the 1970s. This earned him several championships and a legion of fans who enjoyed the spectacle of smoking tires. The bias ply racing tires of the 1960s-1980s lent themselves to driving styles with a high slip angle. As professional racers in Japan drove this way, so did the street racers.

Keiichi Tsuchiya (known as the Dorikin/Drift King) became particularly interested by Takahashi's drift techniques. Tsuchiya began practicing his drifting skills on the mountain roads of Japan, and quickly gained a reputation amongst the racing crowd. In 1987, several popular car magazines and tuning garages agreed to produce a video of Tsuchiya's drifting skills. The video, known as Pluspy, became a hit and inspired many of the professional drifting drivers on the circuits today. In 1988, alongside Option magazine founder and chief editor Daijiro Inada, he would help to organize one of the first events specifically for drifting called the D1 Grand Prix. He also drifted every turn in Tsukuba Circuit in Japan.

One of the earliest recorded drift events outside Japan was in 1993, held at Willow Springs Raceway in Willow Springs, California hosted by the Japanese drifting magazine and organization Option. Inada, founder of the D1 Grand Prix in Japan, the NHRA Funny Car drag racer Kenji Okazaki and Keiichi Tsuchiya, who also gave demonstrations in a Nissan 180SX that the magazine brought over from Japan, judged the event with Rhys Millen and Bryan Norris being two of the entrants.Drifting has since exploded into a massively popular form of motorsport in North America, Australia, Asia, and Europe.

Drifting has evolved into a competitive sport where drivers compete mostly in rear-wheel-drive cars, to earn points from judges based on various factors. At the top levels of competition, the D1 Grand Prix in Japan pioneered the sport. Others such as Formula D in the United States, King of Europe and the British Drift Championships in Europe, Formula Drift Asia in the Malaysia/Singapore/Thailand/Indonesia and the NZ Drift Series in New Zealand have come along to further expand it into a legitimate motor sport worldwide. The drivers within these series were originally influenced by the pioneers from D1 Japan and are able to keep their cars sliding for extended periods of time, often linking several turns.

Drifting competitions are judged based on line, angle, speed and show factor. Line involves taking the correct line, which is usually announced beforehand by judges. The show factor is based on multiple things, such as the amount of smoke, how close the car is to the wall or designated clipping point, and the crowd's reaction. Angle is the angle of a car and more importantly the turned wheels in a drift, speed is the speed entering a turn, the speed through a turn, and the speed exiting the turn; faster is better.

The judging takes place on just a small part of the circuit, a few linking corners that provide good viewing, and opportunities for drifting. The rest of the circuit is irrelevant, except as it pertains to controlling the temperature of the tires and setting the car up for the first judged corner. In the tandem passes, the lead driver often feints his or her entry to the first corner to upset the chase driver, however in some European series, this practice is frowned upon by judges and considered foul play, resulting in deduction of points.

There are typically two sessions, a qualifying/practice session, and a final session. In the qualifying sessions, referred as Tansō (単走:solo run), drifters get individual passes in front of judges (who may or may not be the final judges) to try to make the final 16. This is often on the day preceding the final.

The finals are tandem passes, referred as Tsuisō (追走:chasing race). Drivers are paired off, and each heat comprises two passes, with each driver taking a turn to lead. The best of the 8 heats go to the next 4, to the next 2, to the final. The passes are judged as explained above, however there are some provisos such as:

Points are awarded for each pass, and usually one driver prevails. Sometimes the judges cannot agree, or cannot decide, or a crowd vocally disagrees with the judge's decision. In such cases more passes may be run until a winner is produced. Sometimes mechanical failure determines the battle's outcome, either during or preceding a heat. If a car cannot enter a tandem battle, the remaining entrant (who automatically advances) will give a solo demonstration pass. In the event of apparently close or tied runs, crowds often demonstrate their desire for another run with chants of 'one more time'.

There is some regional variation. For example in Australia, the chase car is judged on how accurately it emulates the drift of the lead car, as opposed to being judged on its own merit, this is only taken into consideration by the judges if the lead car is on the appropriate racing line. Other variations of the tansou/tsuiso and the tansou only method is the multi-car group judging, seen in the Drift Tengoku videos where the four car team is judged in groups.

Usually, drift cars are light to moderate weight rear-wheel-drive coupes and sedans over a large range of power levels. There have also been AWD rally cars that have been converted to RWD.

Despite the export of Japanese Domestic Market (JDM) vehicles to continents outside Japan,drifters in other countries prefer to use local examples as drift cars.

A high volume of JDM imports were brought to countries such as Australia, however it is not unusual to see Australian domestic vehicles such as the Holden Commodore or Ford Falcon utilised in drifting competitions.

The American market enjoyed a relatively high volume of JDM cars being imported over the last decade, despite Japanese domestic vehicles being right-hand-drive only. Locally sold imports such as the Lexus SC and Nissan 240SX feature heavily in American drifting, however they are usually modified with JDM engine transplants to mirror their Japanese domestic equivalents (usually with a Toyota 1JZ-GTE/2JZ-GTE or Nissan CA18DET/SR20DET respectively)

In the UK there are a high level of Japanese imports used within the drifting scene, due in part to the UK sharing a right hand drive layout with Japan. However these cars often command stronger premiums over UK market cars, partly due to import costs. There are plenty of UK and European models used as drift cars as well, older BMW's are particularly prominent due to cost and availability, with Volvo 300 series and Ford Sierras also proving popular.