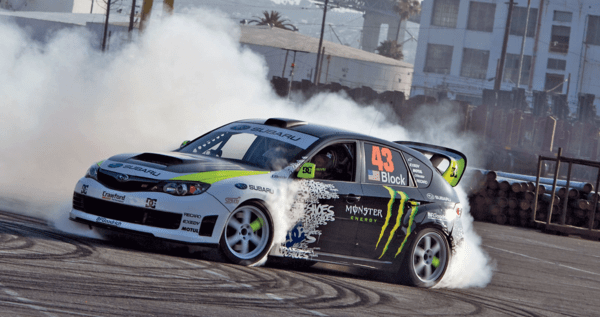 The handbrake turn is a driving technique used to deliberately slide a car sideways, either for the purpose of negotiating a very tight bend quickly, or for turning around well within the vehicle's own turning circle.

The driver starts by using steering input to transfer weight to the outside tires; the handbrake is then used to lock the rear wheels, thus upsetting the adhesion between the tires and the road surface. With practice, the car can be placed accurately by releasing the handbrake and accelerating the vehicle. The technique is used in some forms of motorsport, for example rallying, autotesting, and motorkhana.

Many sports cars, especially English makes such as MG and Triumph, as late as the early 1970s were offered with a fly-off handbrake option for competition purposes—the button on the end of the lever has to be pressed before the brake will lock on, which is the reverse of the normal arrangement—allowing for faster and more controlled application in a handbrake turn, and was less liable to be accidentally locked on while doing such a maneuver.

In a rear-wheel drive manual transmission vehicle, it is also necessary to operate the clutch to prevent the handbrake from stalling the engine.

In a normal turn, the rear wheels follow the front ones because the resistance in the forward direction (i.e. where the wheels turn) is significantly less than in the sideways direction, and the latter provides the centripetal force that makes the rear end follow the turn. When the driver locks the rear wheels with the handbrake, both directions have the same resistance, so the rear end tends to keep moving in the original direction (inertia) and thus it slides out.

Handbrake turns are primarily a technique used to negotiate tight turns in motorsport but can also be used in certain other applications such as stunt or pursuit driving.

For stunt purposes, parallel parking can be completed in a single motion using the handbrake. This technique is often demonstrated at car shows, demonstrating the vehicle's agility and the driver's control.

In pursuit driving, the technique can be used for turning the car around in the width of two lanes without using a three-point maneuver (see bootleg turn), for example to bewilder a pursuer. It can also be used to quickly negotiate tight corners.

Whereas pulling the handbrake is the easiest way to start a drift, it's rarely used in racing, because it causes significant loss of speed at the exit of the corner. Racers use handbrake turning only to negotiate tight 180 degrees bends that would otherwise require a three-point maneuver to go through.

In Europe, many cars are front wheel drive. For rallying, cars are often fitted with a "hydraulic handbrake", in this case, a secondary master cylinder is connected to only the rear brakes. By using a hydraulic, rather than the conventional cable handbrake, the rear brakes can be locked up instantaneously and repeatedly. Many rally drivers will use the handbrake to correct the inherent understeer in a front wheel drive car, while maintaining full forward speed. This as opposed, to "lift off oversteer", induced to the chassis through lifting the throttle pedal sharply mid corner to encourage weight transfer, at the cost of exit speed from a corner.

Like other methods of inducing a drift, the handbrake turn does pose a serious risk of the vehicle flipping over, and caution must be taken when performing the maneuver with a vehicle with a high center of gravity (such as an SUV). The basic danger lies in bad judgment of surroundings, resulting in the sliding vehicle hitting an obstacle (another vehicle, a guardrail or a tree), or bad judgment of speed, resulting in the vehicle driving off the road rather than sliding, or releasing the handbrake when the vehicle is moving sideways so that all tire forces are sideways.